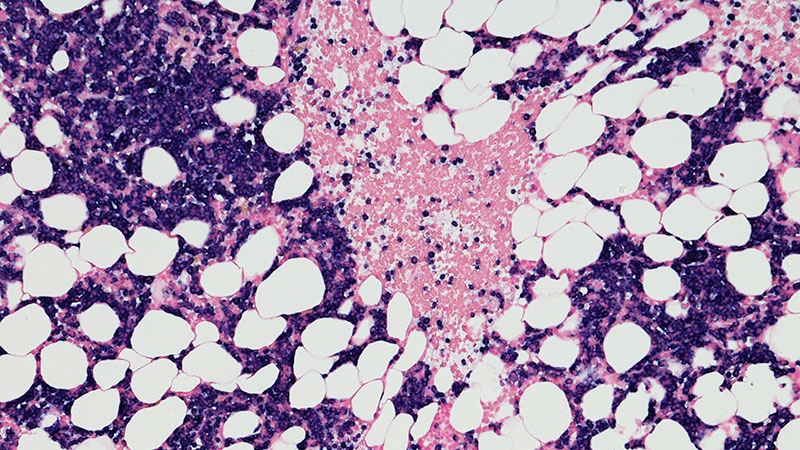 New results from a trial in patients with newly diagnosed multiple myeloma offer some answers to questions about which treatment route to choose.

The trial, known as DETERMINATION, found that newly diagnosed patients treated with a triplet of drugs had longer progression-free survival (PFS) if they received an autologous stem cell transplant (ASCT) soon after the drug therapy than if they simply had their stem cells collected for a possible future transplant.

Patients who received the triplet of lenalidomide, bortezomib, and dexamethasone (RVD) plus ASCT had a median PFS of 67.5 months, compared with 46.2 months for those who received RVD but did not have a transplant soon after.

However, patients were just as likely to be alive more than 6 years after treatment regardless of whether or not they underwent an immediate stem cell transplant.

In addition, treatment-related adverse events of grade 3 or above were higher in the group that received the transplant immediately after the triplet therapy.

The results were presented here during a plenary session at the American Society of Clinical Oncology (ASCO) 2022 annual meeting and simultaneously published in the New England Journal of Medicine.

Another finding from the trial was that the use of maintenance lenalidomide in both groups continuously until progression conferred substantial clinical benefit.

“We can also say that the use of lenalidomide maintenance therapy is also a standard of care,” he added.

“This tells us that for patients who had kept transplant in reserve, they had the same overall survival as those who had had a transplant right away, despite there being such impressive initial disease control for the patients in whom transplant was used early,” Richardson commented in a press release from his institution.

Patients who did not undergo immediate transplant received treatment when their disease progressed with newer and active therapies, such as monoclonal antibodies and/or next-generation novel agents, he noted. Only 28% of patients used the reserve option of a transplant.

“It demonstrates the extent to which patients now have options and that we have new data to guide them in balancing the pluses and minuses of each approach,” he added.

When looking at safety, the authors noted that the most common treatment-related adverse events of grade 3 or higher occurred in 279 patients (78.2%) in the RVD-alone group and 344 patients (94.2%) in the transplantation group. Of those patients, 60.5% and 89.9%, respectively, reported hematologic events of grade 3 or higher (P < .001). The 5-year cumulative incidence of invasive second primary cancers was similar in both cohorts (RVD-alone group, 4.9%; transplantation group, 6.5%).

However, while the risk of secondary cancers was similar between groups, Richardson noted that there was a higher incidence of acute myeloid leukemia and myelodysplastic syndromes in the transplant cohort.

“There was also a significant drop in quality of life across transplant procedures, but the good news is that it was recoverable rapidly,” he said. “What is also really important is that we have prospective, multicenter, national comparative data on toxicity. That’s very important for providing patients with a choice as they move forward with their treatment plan.”

He also noted that treatment continues to evolve. “This study was designed in 2009, begun in 2010, and now there is mature data in 2022,” Richardson commented. “This is particularly relevant as we have now further improved the induction treatment for younger patients with newly diagnosed myeloma using quadruplet regimens incorporating monoclonal antibodies and novel next-generation therapies. The results from these studies are extremely exciting.”

“Now more than ever, treatment for multiple myeloma can be adapted for each patient,” Richardson commented. “Our study provides important information about the benefits of transplant in the era of highly effective novel therapies and continuous maintenance, as well as the potential risks, to help patients and their physicians decide what approach may be best for them. This is particularly relevant as we have now further improved the induction treatment for younger patients with newly diagnosed myeloma using quadruplet regimens incorporating monoclonal antibodies, such as RVD combined with daratumumab.”

Lack of Difference in Overall Survival

“The treatment regimen is applicable to patients who are determined by an expert in transplantation to be fit to receive autologous hematopoietic transplantation,” he added. “Although this study, like many others, establishes hematopoietic stem cell transplantation as part of the standard of care in multiple myeloma, only a fraction of patients are actually offered this important modality of treatment for a variety of reasons, including provider bias,” he noted. “In fact, although improvement in supportive care has enhanced the safety of the procedure, many patients are denied this therapy.”

The toxicities are manageable, and the incidence of secondary malignancies was not significantly different between cohorts. “However,” he emphasized, “lenalidomide has been associated in other studies with increased incidence of secondary malignancies and it must be noted that this study used extended administration of lenalidomide until progression.”