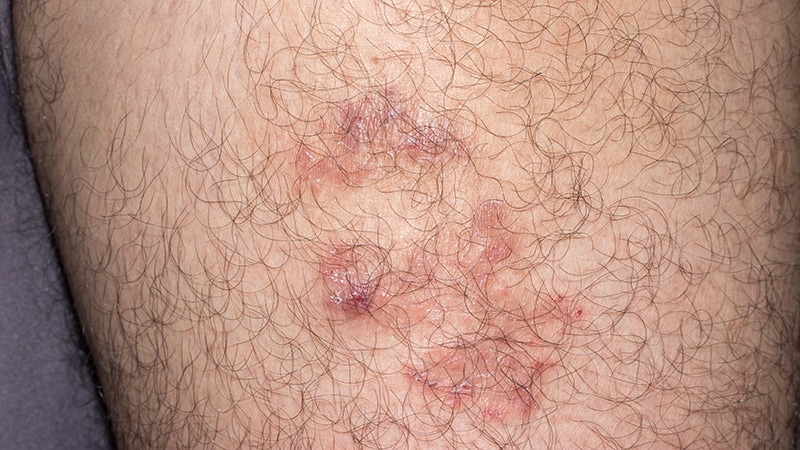 For patients presenting with moderate to severe bullous pemphigus vulgaris, the choice of initial therapy has been distilled to a single agent: rituximab. This drug is more rapidly effective, more likely to provide sustained remission, better tolerated, and lowers healthcare costs, according to an expert summary at the American Academy of Dermatology 2022 annual meeting.

With rituximab “we are not only able to offer better efficacy, earlier and longer remissions, less side effects, less risk of relapse after a response, but it is actually cheaper,” reported Erin X. Wei, MD, director of the Bullous Diseases Clinic at Brigham and Women’s Hospital, Boston, Massachusetts.

There are many treatments that reduce the inflammatory component of bullous pemphigus. Corticosteroids, doxycycline, mycophenolate mofetil, azathioprine, and methotrexate are among those options commonly considered in the early control of this rare and potentially fatal autoimmune blistering disease of the skin, mouth, and other tissues.

Not all of these options have been compared directly in controlled trials, but Wei indicated that the preponderance of evidence is now on the side of rituximab as a first-line choice. For example, in the multicenter Ritux 3 trial, which compared a tapered regimen of prednisone alone to rituximab combined with a shorter and lower-dose prednisone taper, complete response rates off therapy at 2 years were 89% in the rituximab group versus 34% in the group that received prednisone alone.

“This was quite a remarkable difference,” said Wei, who noted that remissions overall occurred faster in the rituximab group and were more durable once achieved.

No other treatment option has demonstrated this degree of relative benefit over corticosteroids, according to Wei. She said there is evidence that mycophenolate mofetil acts more rapidly, but it has not been shown to be superior for sustained complete response. Nor has azathioprine provided a clear advantage over steroids. There are no well-conducted comparisons of methotrexate and prednisone, according to Wei, who is also an assistant professor at Harvard Medical School.

Corticosteroids, doxycycline, and immunomodulators have been characterized as mainstays of early treatment in bullous pemphigus, but Wei argued that the evidence supports starting with the most effective therapy first. There are many advantages to suppressing disease activity “as soon as possible” after diagnosis.

Early control “is associated with a more sustained remission, lower overall steroid use, and better quality of life,” said Wei, listing the hazards of starting with less effective therapy, and explaining why she has moved to rituximab as a first-line choice. According to her, there are data to support these advantages.

Intravenous immunoglobulin (IVIG) therapy is effective in many patients but less reliable, and it has other disadvantages relative to rituximab as a first-line therapy.

“IVIG in pemphigus works quickly when it works, but it is more expensive and it is more of an ongoing therapy relative to rituximab,” said Wei, referring to the lower likelihood of IVIG to provide sustained remissions.

The price of rituximab is high relative to prednisone or other immunomodulators, but management costs are ultimately reduced because of better disease control, according to Wei. She cited a Canadian study published several years ago in which healthcare costs in the 6 months prior to rituximab were compared to costs over 6 months after it was initiated.

In this cohort of 89 patients, the average cost per patient for 6 months of care prior to starting rituximab was $42,231 in Canadian dollars. After treatment was started, the cost fell to $29,423, a 30% reduction, over the next 6 months.

“It takes rituximab up to 3 months or sometimes even longer to achieve its greatest benefit, making these results even more impressive,” Wei said.

The activity of rituximab to suppress autoreactive B-cells can be monitored with antidesmoglein autoantibody levels and by measuring CD20-positive cell percentages. Unlike severity of disease at baseline, which Wei said is not a reliable predictor of relapse risk, these can guide steroid tapering.

“If the patient is not making new autoantibodies, then tapering steroids can be considered safe,” Wei said.

One small case series cited by Wei has suggested that rituximab might be effectively employed as a maintenance therapy. The maintenance treatment, which initially consisted of 1 gm of rituximab every 6 months, was evaluated in 11 patients with a history of severe and frequent relapses.

In this group, rituximab was first employed to achieve a complete response. The maintenance was initiated when patients were in remission. In some patients, the maintenance dose interval was extended to once every 12 months over time. During a mean follow-up of 4 years, all 11 patients remained in complete remission.

“This was a remarkable result,” said Wei, who noted that there were no serious adverse events associated with rituximab maintenance over this period. This cannot be considered a routine strategy without a large patient experience, according to Wei, but it does provide another piece of evidence that rituximab is effective and well tolerated.

There are no guidelines from a major organization that establish an evidence-based treatment algorithm for pemphigus, but Wei is not alone in considering early initiation of the most effective therapy as the best approach to sustained control.

“I agree that rituximab is a good first-line option for pemphigus patients,” said Kara Heelan, MBBCh, MD, a consultant dermatologist at the Royal Marsden and Lister Hospital, London, UK. She was the first author of the cost-effectiveness study that Wei cited. The study was published when she was an associate in the Division of Dermatology at the University of Toronto, Ontario, Canada.

By calling rituximab “a good” option rather than a potential standard, Heelan appeared to be more circumspect than Wei about its central role in the care of pemphigus vulgaris, but she did agree in an interview that this agent “has been shown to be cost-effective.” In her study, this was an advantage attributed to relative efficacy and safety that reduced use of healthcare resources.

Ted Bosworth is a medical reporter who writes about clinical advances for a professional audience. He is based in New York City.