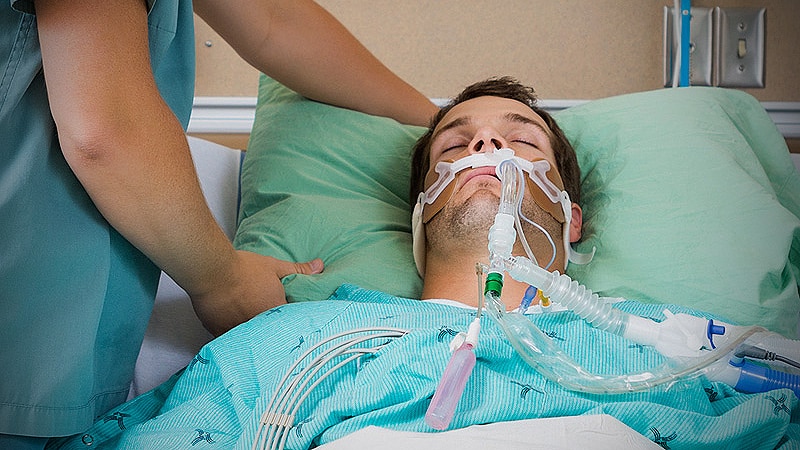 In comatose patients admitted to hospital after being resuscitated from out-of-hospital cardiac arrest (OHCA), a higher blood pressure target was not beneficial, and a restrictive oxygenation target was not harmful, in the BOX randomized trial.

Using a 2 × 2 factorial design, researchers randomly assigned 789 comatose patients with OHCA in Denmark to a target mean arterial blood pressure (MAP) of 63 mm Hg or 77 mm Hg, and then further randomly assigned patients in each group to receive “restrictive” oxygenation, defined as a partial arterial oxygenation pressure (PaO2) target of 9-10 kilopascal (kPa), or a “liberal” PaO2 target of 13-14 kPa.

The primary study outcome was a composite of death or discharge from hospital in a poor neurologic state, defined as a Cerebral Performance Category (CPC) of 3 or 4 within 90 days of hospitalization.

Targeting a MAP of 77 mm Hg or 63 mm Hg did not result in significantly different numbers of patients dying or having severe disability nor did using a restrictive or liberal oxygenation strategy.

These findings were presented August 27 in a hotline session at the annual European Society of Cardiology (ESC) Congress 2022 and simultaneously published as separate articles in The New England Journal of Medicine.

“In neuro-intensive care, many patients are treated with a lot higher blood pressure than we do in cardiac care; there’s definitely a discussion going on there about which is more beneficial for the brain,” he said.

“We wanted to see whether aiming higher was of benefit to the patient,” he continued. Based on the results, “we’ll be staying on the lower target for future patients,” he said. “We see no benefit of aiming higher.”

“In traumatic brain injury, many patients are treated by targeting higher blood pressures, as [clinicians] believe that brain perfusion and recovery is improved by this,” he noted in an email to theheart.org | Medscape Cardiology.

However, the drugs used to increase blood pressure, usually catecholamines, have side effects and increase the risk for complications, Kjaergaard said.

“Therefore, we think our results support aiming for the lower blood pressure, even if the patients we studied had hypoxic brain injury,” that is, they were comatose after the circulation had been restored. “We think that the lower target should be implemented in protocols on treating comatose cardiac arrest patients.”

Similarly, More Oxygenation Is Not Better

Presenting the oxygenation target findings, Møller summarized by saying, “I’m going to try to convince you that for oxygen, more is not better, like for blood pressure.”

The study “demonstrates no benefit of aiming for a higher oxygen target in post out-of-hospital cardiac arrest care,” Møller, from Odense University Hospital, Denmark, concluded. It “reassures that a restrictive oxygen target for patients with high risk of hypoxic brain injury cause no harm.”

“I’m not disappointed by this because I think it’s very reassuring that we don’t have to give more oxygen; we don’t have to keep patients on the ventilator for extended periods to obtain very high oxygen levels,” he said, “So for me, it’s actually a very positive result.”

“Our hope is that that guidelines will acknowledge this and recommend a low oxygen target in comatose patients resuscitated after cardiac arrest. Next is to target other parts of the post cardiac arrest syndrome such as inflammation.”

Neutral Results, Yet a Positive Study

“Your trial, as in septic shock, shows that putting blood pressure as high as possible is not the way to go,” and also shows similar results for oxygen saturation,” Alexandre Mebazaa, MD, PhD, the assigned discussant in the hotline session said.

“It is not a neutral study,” Mebazaa, from Hôpital Lariboisière, Paris, said; “It is a positive trial for three reasons.”

Second, “we are going to reduce the use of catecholamines — those drugs are really toxic in our ICU patients.”

Third, “in managing patients after cardiac arrest, the problem is not mortality, the problem is outcome,” he said. “Not only do we need to have those patients surviving, but they need to come back in the normal way with normal neurological conditions.”

Guidelines recommend a mean blood pressure target > 65 mm Hg in comatose patients who have been resuscitated after OHCA, “based on no data,” Mebazaa commented.

The researchers developed a method to “do a good double-blind study” of blood pressure in patients in intensive care, he said. “What I liked so much is the trick you used for the blood pressure.”

Essentially, the researchers recalibrated blood pressure monitors so that they showed a blood pressure reading that was either 10% higher or 10% lower than it actually was. Clinical staff were told to target a MAP of 70 mm Hg in all patients. They did not know that, owing to the recalibrated machines, a reading of 70 was actually 77 mm Hg in the patients randomly assigned to a high MAP target and 63 in the patients randomly assigned to a low MAP target.

The researchers enrolled adult patients with comatose who were resuscitated from OHCA at two large academic centers in Denmark.

The patients had a mean age of 62, 81% were men, a high percentage (86%) had bystander cardiopulmonary resuscitation, and 85% had shockable rhythm. It was 21 minutes to return of spontaneous circulation, 23% had first shock by external defibrillator, 92% had acute coronary angiography, and 44% had ST-segment elevation in ECG.

The patients received standard temperature management with a target of 36 ºC for 24 hours.

There was a clear separation of blood pressure (10.5 mm Hg), achieved by using higher doses of vasopressors.

Møller told the press that determining the best oxygenation and blood pressure targets “is a very important problem, especially the fact that half of the patients that we see in the ICU with this condition die in front of us.”

BOX was funded by the Novo Nordisk Foundation. Møller has received a research grant from Abiomed outside the current study. Kjaergaard discloses that he has no relevant financial disclosures. The disclosures of the other authors are listed with the articles.