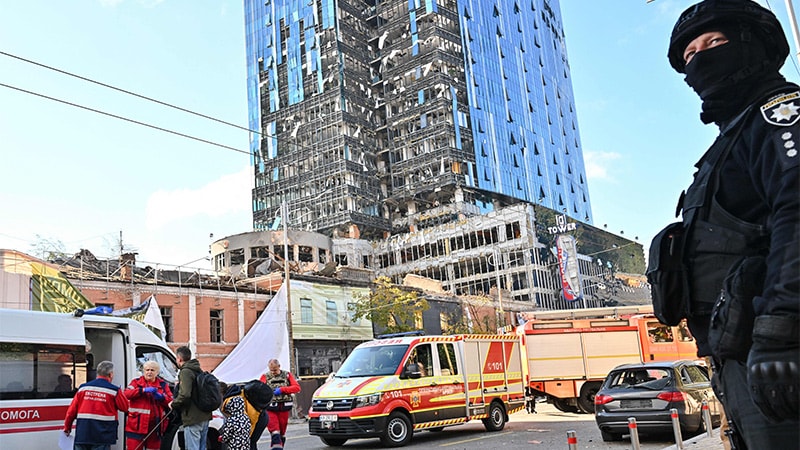 The effects of the Russian invasion of Ukraine have been devastating, with the loss of tens of thousands of civilian lives and about one-third of the population having been displaced. The war has put a great strain on health care in the country.

“The Russian army is targeting civilian infrastructure, trying to plunge Ukrainians into cold and darkness. (It) is also deliberately targeting hospitals and clinics in Ukraine,” said Nataliya Kovalchuk, PhD, during a session on Ukraine health care at the annual meeting of the American Society for Radiation Oncology held this week in San Antonio. She is a clinical associate professor of radiation oncology at Stanford (Calif.) University.

Analysis of previous wars have shown an increase in cancer incidence and mortality, and the same should be expected in the future in Ukraine, according to Ruslan Zelinskyi, MS, who is president of the Ukrainian Association of Medical Physicists and practices at Spizhenko Clinic in Ukraine. “We must prepare for it now, and we do it. During the full-scale war in Ukraine, three new linear accelerators were installed and put into clinical use,” he said during his talk.

He also gave a personal perspective of the terrible conditions and choices facing Ukrainian health care workers. “I have often heard that science is outside of politics. Perhaps in peacetime, but when fragments of missiles pass through the wall” – here, Mr. Zelinskyi paused to swing the camera around to show bomb damage on the walls of the room where he was conducting his virtual talk – “it is impossible to be outside of politics when 900 medical facilities were destroyed or damaged.” Health care workers have been killed, and patients have lost months or years because they could not receive medical care.

That reality is forcing Ukrainians to make choices most health care workers would struggle to imagine. “For many years, I put on medical clothes and fight against cancer. But (for) me comes the moment when I will change my medical clothes to military (clothes), like many, many other Ukrainians of various professions, because we must preserve the freedom of Ukraine and the security of Europe to do science in a peaceful world,” Mr. Zelinskyi said.

In the aftermath of the invasion, the Eurasian Regional Program launched the Safer Ukraine network to ensure continued care for children with cancer and blood disorders. Initially, the patient’s family or physician identifies a child has having a medical need that cannot be met locally and requiring evacuation. The nongovernmental organization Tabletochki, which has worked with children with cancer in Ukraine since 2011, then arranges transport of the child and his or her medical records to the Ukrainian Specialized Children’s Center in Lviv, Ukraine, for evaluation and stabilization. From there, patients along with their mother and sometimes siblings are transferred to Poland. Transportation methods include ambulance, helicopter, bus, and medical trains that have a full intensive care unit aboard.

In Poland, hospitals estimated they could take on another 200 patients without compromising care for their existing patients, but evacuations reached that number within the first few weeks of the war. It was clear patients would have to be transferred to other countries. To do that, Safer Ukraine set up the Unicorn Marian Wilemski Clinic, which is a converted hotel operated as a partnership between many foundations and governments. It sends unstable patients to nearby emergency rooms, and stable patients stay at the clinic until they can be evaluated and matched with an international care provider from a registry of more than 200 hospitals in 29 countries that have agreed to take patients. A 24/7 Zoom call began on the first day of the war, initially staffed by St. Jude volunteers and now by a contractor. It serves as a command center.

Over the first 12 weeks of the war, the program evacuated over 1,000 children, and over 200 medical records per week were being translated at peak activity. Nearly 300 patients went to Poland, and the rest to 18 countries in Europe and North America.

The success of the initiative stems in part from the fact that it leveraged preexisting collaborations that focused on childhood cancer, according to Agulnik. “Many stakeholders that came together had previously worked together, but then quickly came together around this unified initiative with the goal of helping these patients,” she said during her talk.

Roman Kowalchuk, MD, who is a radiation oncology resident at Mayo Clinic, spoke about telemedicine efforts to assist physicians and patients in Ukraine.

“I’ve been especially interested in trying to help through telemedicine. We have so much expertise, so many things that we can offer, even if we can’t be there physically, through some of these avenues that really, especially through COVID, have been further developed in terms of virtual support, virtual expertise, and consultations. That presents the opportunity to be able to share some of that knowledge, some of that expertise, to help clinical care in Ukraine given the current circumstance,” said Kowalchuk during his presentation.

Efforts have used technology like the telemedicine platform Viveo, based in Estonia. One app, called HealUA, takes descriptions from physicians needing advice, and volunteers can scroll through inquiries and provide input. This is especially useful since most physicians in Ukraine are generalists, according to Kowalchuk, and so may need assistance with diagnosis and management of rare conditions.

Other telehealth approaches include TeleHelp Ukraine. There are WhatsApp groups with hundreds of volunteers who translate Ukrainian medical records to other languages to help non-Ukrainian physicians understand a patient’s history. Expertise is also needed in engineering, emergency medicine, surgery, various fields of oncology, and other specialties. Kowalchuk noted that Good Samaritan laws generally shield volunteers in these types of programs from legal liability.

None of the presenters have relevant financial disclosures.