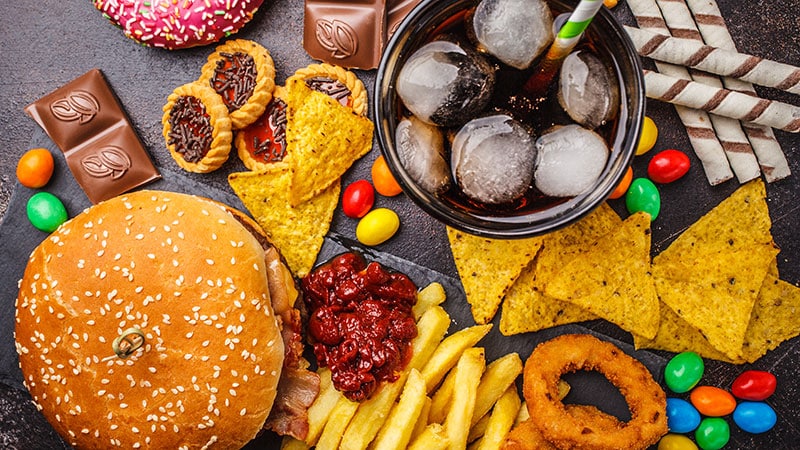 A diet rich in ultraprocessed foods (UPFs) increases the risk for colorectal cancer, heart disease, and death, according to results of two large observational studies published in The BMJ  this week.

Over the past 30 years, there’s been a steady increase in consumption of UPFs worldwide, coupled with mounting evidence that diets rich in UPFs raise the risk for several chronic diseases, including heart disease and cancer. Few studies, however, have focused specifically on the risk for colorectal cancer (CRC).

In Cox proportional models adjusted for confounding factors, men with the highest UPF intake had a 29% higher risk for CRC than men with the lowest UPF consumption. This association was limited to distal colon cancer, with a 72% increased risk.

Among subgroups of UPFs, a higher intake of meat/poultry/seafood-based, ready-to-eat products and sugary drinks were associated with increased risk for CRC among men.

“These products include some processed meats like sausages, bacon, ham, and fish cakes. This is consistent with our hypothesis,” lead author Lu Wang, PhD, with Tufts University in Boston, Massachusetts, said in a news release.

There was no association between overall UPF intake and risk for CRC in women and the reasons for this are unclear, the researchers say.

It’s possible that foods like yogurt help counteract the harmful impacts of other types of UPFs in women, the researchers say.

“Further research will be needed to determine whether there is a true sex difference in the associations, or if null findings in women in this study were merely due to chance or some uncontrolled confounding factors in women that mitigated the association,” co-senior author Mingyang Song, MD, with Harvard T. H. Chan School of Public Health, Boston, says in the news release.

Hard on the Heart Too

The related study in The BMJ  shows a joint association between a low-quality diet and high intake of UPFs and increased risk for death from heart disease or any cause.

In this study of 22,895 Italian adults (mean age, 55 years; 48% men), those with the least healthy diets had a 19% higher risk of dying from any cause and a 32% higher risk for death from cardiovascular disease, over 14 years, compared with peers with the healthiest diets.

Adults with the highest share of UPFs had similarly elevated risks for all-cause and heart disease mortality (19% and 27% higher risk, respectively).

When the two food dimensions (nutrients and food processing) were analyzed jointly, the association of poor diet quality with mortality was significantly attenuated, but UPF intake remained highly associated with mortality, even after accounting for poor nutritional diet quality.

“These findings suggest that highly processed foods are associated with poor health outcomes independently of their low nutritional composition,” Marialaura Bonaccio, PhD, with IRCCS NEUROMED, Pozzilli, Italy, and colleagues note in their paper.

The new studies linking UPFs to CRC and heart disease join a recent study that found high UPF intake is harmful for the aging brain, as reported by Medscape Medical News.

A Call to Action

Putting it bluntly, “Everybody needs food, but nobody needs ultra-processed foods,” Carlos Monteiro, MD, PhD, and Geoffrey Cannon, with University of Sao Paulo in Brazil, write in an editorial in The BMJ.

They point out that most UPFs are made, sold, and promoted by corporations that make them to be convenient, affordable, and hyper-palatable, and thus liable to displace other foods and also to be overconsumed.

“The rational solution is official public policies, including guidelines and publicity advising avoidance, and actions, including statutes, designed to reduce production and consumption of ultraprocessed foods and to restrict or preferably prohibit their promotion,” Monteiro and Cannon suggest.

“Enacted, this will promote public health. It will also nourish families, society, economies, and the environment,” the editorialists conclude.

The US study was supported by the National Institutes of Health and the Friedman School of Nutrition Science and Policy at Tufts University. The Italian study was supported by the Pfizer Foundation, Italian Ministry of University and Research, Instrumentation Laboratory, Milan, and the Italian Ministry of Health. Wang, Song, Bonaccio, Monteiro, and Cannon report no relevant financial relationships.