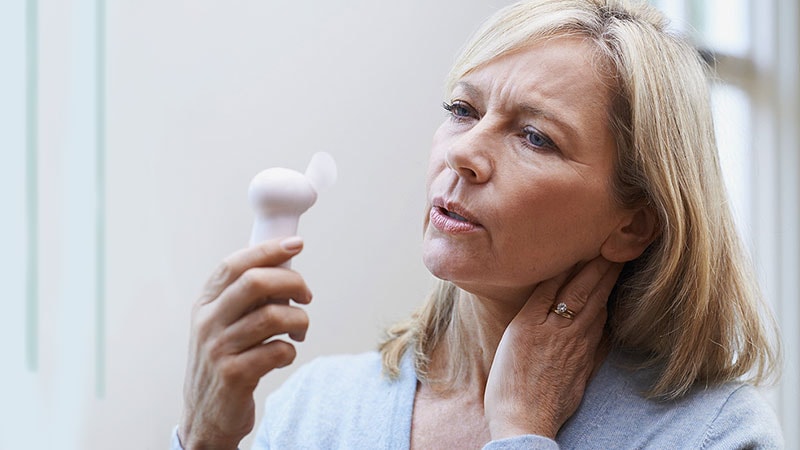 Hormone therapy did not increase mortality in postmenopausal women treated for early-stage estrogen receptor–positive breast cancer, but, in longitudinal data from Denmark, there was a recurrence risk with vaginal estrogen therapy among those treated with aromatase inhibitors.

Genitourinary syndrome of menopause (GSM) — including vaginal dryness, burning, and urinary incontinence — is common in women treated for breast cancer. Adjuvant endocrine therapy, particularly aromatase inhibitors, can aggravate these symptoms. Both local and systemic estrogen therapy are recommended for alleviating GSM symptoms in healthy women, but concerns have been raised about their use in women with breast cancer. Previous studies examining this have suggested possible risks for breast cancer recurrence, but those studies have had several limitations including small samples and short follow-up, particularly for vaginal estrogen therapy.

In the new study, from a national Danish cohort of 8,461 postmenopausal women diagnosed between 1997 and 2004 and treated for early-stage invasive estrogen receptor–positive nonmetastatic breast cancer, neither systemic menopausal hormone therapy (MHT) nor local vaginal estrogen therapy (VET) were associated with an overall increased risk for either breast cancer recurrence or mortality. However, in the subset who had received an aromatase inhibitor — with or without tamoxifen — there was a statistically significant increased risk for breast cancer recurrence, but not mortality.

The results were published in the Journal of the National Cancer Institute.

“The data are reassuring for the majority of women with no adjuvant therapy or tamoxifen. But for those using adjuvant aromatase inhibitors, there might be a small risk,” study lead author Søren Cold, MD, PhD, senior oncologist in the department of oncology at Odense (Denmark) University Hospital, Odense, said in an interview.

Moreover, Cold noted, while this study didn’t find an increased recurrence risk with MHT for women taking aromatase inhibitors, other studies have. One in particular was stopped because of harm. The reason for the difference here is likely that the previous sample was small — just 133 women.

“Our study is mainly focusing on the use of vaginal estrogen. We had so few patients using systemic menopausal hormone therapy, those data don’t mean much. … The risk with systemic therapy has been established. The vaginal use hasn’t been thoroughly studied before,” he noted.

The study pool was 9,710 women who underwent complete resection for estrogen-positive breast cancer and were all allocated to 5 years of adjuvant endocrine treatment or no adjuvant treatment, according to guidelines. Overall, 3,112 received no adjuvant endocrine treatment, 2,007 were treated with tamoxifen only, 403 with an aromatase inhibitor, and 2,939 with a sequence of tamoxifen and an aromatase inhibitor.

After exclusion of 1,249 who had received VET or MHT prior to breast cancer diagnosis, there were 6,391 not prescribed any estrogen hormonal treatment, 1,957 prescribed VET, and 133 prescribed MHT with or without VET.

Overall, compared with women who never used hormonal treatment, the absolute 10-year breast cancer recurrence risk was 19.2% for never-users of VET or MHT, 15.4% in VET users, and 17.1% in MHT users.

No Differences Found for Mortality

Asked to comment, Nanette Santoro, MD, professor and E. Stewart Taylor Chair of Obstetrics & Gynecology at the University of Colorado at Denver, Aurora, said in an interview: “It is important to look at this issue. These findings raise but don’t answer the question that vaginal estradiol may not be as safe as we hope it is for women with breast cancer using an aromatase inhibitor.”

However, she also pointed out that “the overall increase in risk is not enormous; mortality risk was not increased. Women need to consider that there may be some risk associated with this option in their decision making about taking it. Having a satisfying sex life is also important for many women! It is really compassionate use for quality of life, so there is always that unknown element of risk in the discussion. That unknown risk has to be balanced against the benefit that the estrogen provides.”

And, Santoro also noted that the use of prescription data poses limitations. “It cannot tell us what was going on in the minds of the patient and the prescriber. There may be differences in the prescriber’s impression of the patient’s risk of recurrence that influenced the decision to provide a prescription. … Women using AIs [aromatase inhibitors] often get pretty severe vaginal dryness symptoms and may need more estrogen to be comfortable with intercourse, but we really cannot tell this from what is in this paper.”

Indeed, Cold said: “We admit it’s not a randomized study, but we’ve done what was possible to take [confounding] factors into account, including age, tumor size, nodal status, histology, and comorbidities.”

He suggested that a potential therapeutic approach to reducing the recurrence risk might be to switch VET-treated women to tamoxifen after 2-3 years of aromatase inhibitors.

This work was supported by Breast Friends, a part of the Danish Cancer Society. Cold received support from Breast Friends for the current study. Some of the other coauthors have pharmaceutical company disclosures. Santoro is a member of the scientific advisory boards for Astellas, Menogenix, Que Oncology, and Amazon Ember, and is a consultant for Ansh Labs.