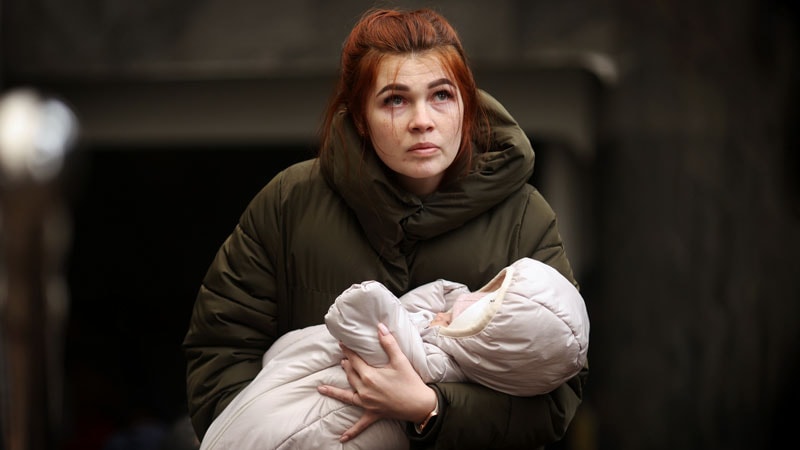 This article was originally published in Italian on Univadis .

The arrival of Ukrainian refugees in Italy, and especially the arrival of women and children coming from the cities most affected by the attacks, has made local medical services the first point of contact for the diagnosis and care of the psychological effects of war.

Many studies demonstrate the high prevalence of posttraumatic stress disorder (PTSD), depression, and anxiety among refugees. For example, a study from 2019 on refugee mental health offers a disturbing epidemiologic insight: 10% of refugees escaping conflict in Nepal showed signs of PTSD, 27.5% suffered from depression, and 22.9% from anxiety. The rate of depression surpasses 90% in all studies carried out on survivors of torture.

Posttraumatic stress is a form of mental disorder that manifests after experiencing highly traumatic events. Defined and studied in the United States, especially in veterans of the Vietnam War, and subsequently reviewed in relation to more recent conflicts, PTSD may appear in people of all ages. It also can occur in family members, witnesses, and aid workers involved in traumatic events. PTSD may also come from repeated exposure to episodes of violence and degradation.

Because it is a complex mental disorder derived from multiple factors, both personal and environmental, a diagnosis of PTSD is never straightforward. It is generally indicated as “a condition of acute stress which manifests after exposure to a traumatic event.”

Among the most common symptoms of war-related trauma, according to experts, are the onset of flashbacks of troublesome memories, intrusive trauma-related thoughts, panic attacks, insomnia and night terrors, and social avoidance. In children, elements of regression can be observed, such as a need to sleep next to their parents.

Research performed directly on different areas of the brain has demonstrated that people affected by PTSD produce abnormal levels of hormones that are involved in responding to stress and fear. The area of the brain responsible for this response is the amygdala, which activates during moments of fear and produces natural pain-relieving molecules. In people with PTSD, the production of these molecules can carry on long after the event is over, causing a change in emotional state. Furthermore, levels of neurotransmitters that reach the hippocampus are also altered, which influences memory and learning capability. These same alterations concerning neurotransmitter levels are the basis for sudden flashbacks.

People with PTSD are also subject to a change in blood flow to the brain and structural changes to brain tissue.

“A factor that worsens the mental condition of Ukrainian refugees is the speed in which they have passed from a normal life, similar to that of many other Western countries, to a state of war, death, and injury,” writes Arash Javanbakht, MD, associate professor of psychiatry at Wayne State University in Detroit, Michigan, and an expert in PTSD in war refugees. “Furthermore, they are experiencing an awful feeling of injustice, as the democracy and freedom that they have fought so hard to have has been put at risk, and they don’t feel sufficiently supported by their allies.”

As of this writing, the World Health Organization has estimated that there are 3.6 million Ukrainian refugees. This population already has experienced war and its psychological consequences. A study from 2019 assessed the prevalence of PTSD (27%) and depression (21%) among the 1.5 million Ukrainians who had to leave their homes after the first Russian invasion in 2014 and the rebellion of predominantly Russian regions.

Children are particularly at risk of developing PTSD, as seen from studies conducted on Syrian refugees. They have a roughly 70% chance of developing separation anxiety, a condition that many workers and volunteers have experienced firsthand recently. Some children do not accept being separated from their parents even to allow them to go to the bathroom or wash themselves, which also aggravates stress levels among adults. Infant trauma also increases the risk of developing physical or mental disorders during adulthood, including depression, chronic pain, heart disorders, and diabetes.

War-related trauma also entails transmissible epigenetic alterations, as shown by studies on the transmissibility of trauma on a biological level.

People with PTSD have difficulty controlling their emotions, resulting in irritability, sudden rage or emotional confusion, depression and anxiety, and insomnia. They also are determined to avoid any actions that remind them of the traumatic event. Another common symptom is a sense of shame, as a result of having survived or not having been able to save others.

Physical symptoms include chest pain, dizziness, gastrointestinal problems, migraine, and a weakened immune system. A diagnosis of PTSD can be made when, in accordance with the American National Institute of Mental Health (NIMH), the patient presents with the characteristic symptoms for more than a month after the event that caused the symptoms occurred.

The NIMH highlights that a diagnosis cannot always be made in a systematic way. In many cases, patients with PTSD are treated for the physical symptoms only, without any consideration for the overall picture.

The American Psychiatric Association (APA) has created a detailed list of PTSD symptoms. According to the APA, these symptoms usually appear within 3 months of the trauma, even if stress may appear later. Symptoms are arranged into the following three well-defined categories:

Why do some people pass unscathed through traumatic situations, whereas others carry the scars forever? There is a correlation with the severity of the trauma, but also with biological and genetic factors, as well as with previous experiences that contribute to increasing an individual’s resilience. Another key element is the rapid and effective treatment of symptoms, which also relates to personal and financial security.

It is not a coincidence that the first guidelines that clinicians follow when treating a traumatized patient aren’t strictly medical. It is necessary to guarantee the financial security of a refugee, but also the security of the few valuable items they have with them (such as keepsakes and pets). Clinicians are advised to facilitate contact with any of the patient’s family members located elsewhere whenever possible. It is appropriate to use relaxation techniques that are compatible with the patient’s cultural approach. Clinicians also check for the most common conditions in the refugee’s population of origin. It is advisable constantly to check for trauma-related symptoms and to listen to the patient’s story. Caregivers should be allowed to stay close to their children and should be provided sufficient information, but not an overwhelming amount.

There isn’t a consensus on how to treat people with PTSD. The possibility that PTSD can be resolved even without specific treatments has not been excluded, if the affected person is cared for and helped within a family and community setting, and if their personal condition allows for this. However, in general, some form of treatment is beneficial before symptoms become chronic.

Pharmacologic and psychological treatment may be implemented. For the latter, the NIMH and the APA suggest that good results can be obtained from cognitive behavioral therapy, where the patient learns to manage his or her anxiety and depression and amend dangerous behaviors, such as the dismissal of his or her own emotions. According to these organizations, group therapy and other forms of psychotherapy have also provided good results. The indicated duration of treatment is generally 6-12 weeks, even if this duration strongly depends on the individual’s condition, with subsequent periodic follow-ups. The involvement of the patient’s family and community is incredibly important.

The National Center for PTSD in Washington, DC (run by the US Department of Veterans Affairs) has highlighted the importance of a detailed case-by-case assessment to put in place a precise therapy plan. If patients should continue to find themselves in a state of crisis, for example during a war or in cases of domestic violence, working toward removing the cause of stress is first necessary before beginning treatment.

An important aspect is making the victim aware of the disorder. Treatment should therefore begin after the patient and family have been informed about the possibility of PTSD and the way in which it develops. Recognizing the symptoms over the following weeks and working quickly to manage and treat them significantly affects treatment success.