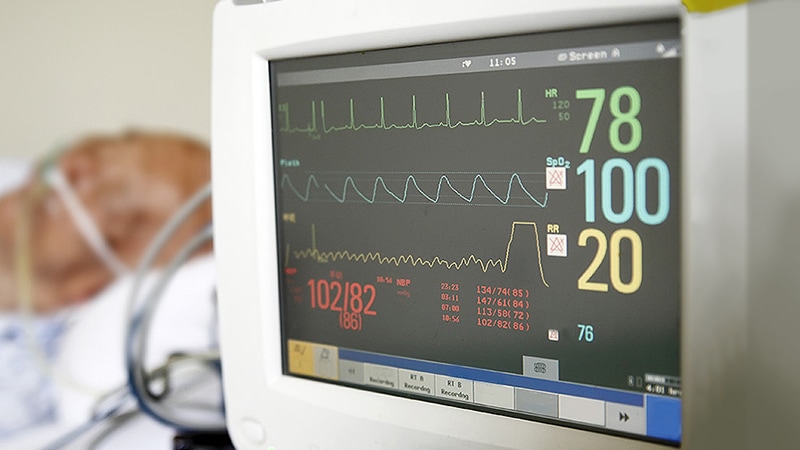 A large randomized trial that was investigating intensive lowering of blood pressure in acute ischemic stroke patients who had undergone mechanical thrombectomy has been stopped early because of safety concerns.

“Intensive control of systolic blood pressure to lower than 120 mm Hg should be avoided to prevent compromising the functional recovery of patients who have received endovascular thrombectomy for acute ischemic stroke due to intracranial large-vessel occlusion,” the investigators conclude.

Results from the ENCHANTED2/MT trial were presented by Craig Anderson, MD, professor of neurology and epidemiology, University of New South Wales, Sydney, Australia, on October 28 at the 14th World Stroke Congress (WSC), which is taking place in Singapore.

The study was simultaneously published online in The Lancet.

“What our results have pretty convincingly shown is that in acute stroke patients who have undergone mechanical thrombectomy, lowering blood pressure down to a systolic of 120 mm Hg for 3 days is too low for too long. We shouldn’t go that far down,” Anderson told theheart.org | Medscape Cardiology.

Anderson said the trial has provided an important message for clinical practice.

“This result is not what we expected, but it is a definitive result and gives us a lower safety margin for blood pressure in acute ischemic stroke patients. This, in itself, is a big step forward.”

He noted that the optimum blood pressure for these patients is not known.

“We need to do further trials to determine optimum blood pressure in these acute patients, but perhaps we should be aiming more towards 140 mm Hg,” he suggested.

“But this trial shows us that in patients who have had successful clot retrieval with endovascular treatment for acute ischemic stroke, careful blood pressure management is important to avoid levels becoming too low. We have to make sure we don’t overshoot down to 120 mm Hg or below.”

The chair of the WSC session at which the trial was presented, Jeyaraj Pandian, MD, head of neurology at Christian Medical College, Ludhiana, India, who is the current vice-president of the World Stroke Organization, said: “This is a very important result. It has major practical implications.”

“Theoretically, if we can control the blood pressure, we may be able to improve outcomes,” he said.

In 2019, the first ENCHANTED trial reported that controlling blood pressure by a moderate amount ― to around 140 mm Hg, which is lower than currently recommended in the guidelines ― was linked to a reduction in bleeding complications of thrombolysis and appeared safe, but it did not improve recovery, Anderson noted.

“This trial was done before mechanical thrombectomy became routinely adopted, and this procedure has now become the standard of care for large-vessel occlusion strokes, but we don’t know what we should do about blood pressure in these patients,” he added.

A smaller French trial has suggested lowering blood pressure to 130 mm Hg, rather than a more liberal 130 – 180 mm Hg, was safe after successful mechanical thrombectomy, but there was no effect on functional outcome.

“In stroke patients with a large-vessel occlusion, blood pressure is often elevated to very high levels. There are wide ranges of opinions on what to do about this ― whether it should be lowered, and by how much,” Anderson said. “We conducted the current ENCHANTED2/MT trial to look at this issue.”

The primary endpoint was disability, as measured by the Modified Rankin Scale (mRS) score at 90 days.

The study was started in China with the intention of expanding recruitment internationally. The planned enrollment was more than 2000 patients.

However, in March of this year, after 821 patients had been enrolled, the data safety monitoring board (DSMB) recommended that recruitment into the trial be suspended because of a safety signal. All of the patients who had been recruited were from China.

These patients were followed to obtain the 3-month outcome results, after which the DSMB recommended that the trial be stopped because safety was still a problem.

Results showed that the patients who underwent the more intensive blood pressure lowering had more disability at 3-month follow-up, with worse scores on a shift analysis of the mRS than those in the less intensive group (common odds ratio [OR], 1.37; 95% CI, 1.07 – 1.76).

The unfavorable shift in mRS scores in the more intensive group was consistent in adjusted sensitivity analysis, and there was no significant heterogeneity in the treatment effect on the primary outcome across all prespecified subgroups.

No Difference in ICH or Severe Hypotension Episodes

“Our results show that intensive lowering of blood pressure appears to be associated with worsening physical disability. While there was no difference in mortality rates between the two groups, the lower blood pressure appeared to compromise the ability to recover from the stroke,” Anderson said.

On the possible mechanism of harm, he suggested that the intensive blood pressure reduction might be interfering with blood flow through the injured part of the brain and impeding the ability to recover from the clot removal procedure.

What Levels Should be Aimed For?

Anderson stressed that it was important to have conducted this trial.

“Most clinicians aim for about the 140 mm Hg mark, but there is a large variation in opinion on what to do,” he said. “Some doctors treat aggressively, believing that lower pressures could be beneficial in preventing bleeding and swelling, and others prefer to keep levels higher. Our results have helped to give some guidance on this.”

Asked what he thought an optimum target would be, Anderson replied: “For now, I think a target of around 140 mm Hg systolic would be reasonable, and there is no evidence to move below that.”

“The real importance of these study results is that they show that lowering blood pressure too much is detrimental on outcome. My personal interpretation, looking at the results of this study but also on the previous studies, is that we should aim for a target of 140–150 mm Hg. This is true for patients with recanalization therapy. For patients without any therapy, I would even be more careful in lowering blood pressure and recommend just staying below 180 mm Hg.”

As to whether these results are generalizable to other populations, given that the patients were Chinese, Anderson noted that Asian people have higher rates of intracranial atherosclerosis and more blood pressure complications in the heart and kidney than White patients. Stroke management patterns also differ.

“These points raise questions about generalizability, and while I think this is an issue for consideration, I do not think it should detract from the clarity of these results,” he commented.