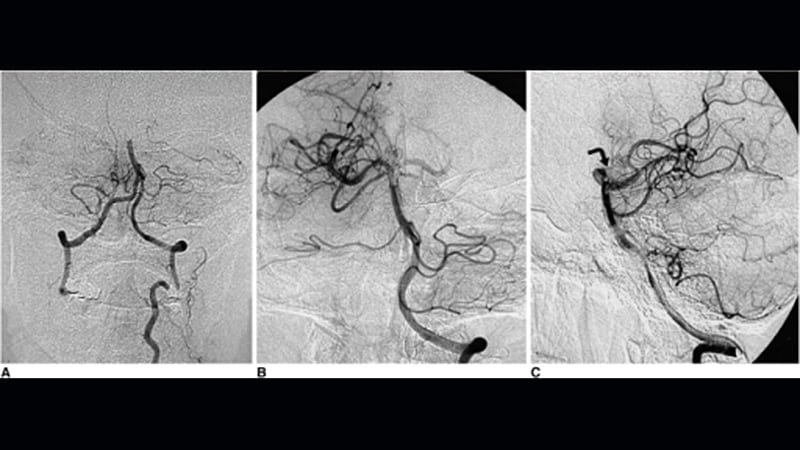 Giving intra-arterial thrombolysis after successful thrombectomy in patients with acute ischemic stroke led to a large increase in the number of patients achieving an excellent neurologic outcome at 90 days in a groundbreaking new study.

The phase 2b CHOICE study was presented February 9 at the International Stroke Conference (ISC) 2022 by Ángel Chamorro, MD, University of Barcelona, Spain, who received a round of applause as the results were revealed.

The study was also published online in the Journal of the American Medical Association to coincide with the presentation at the ISC.

The main results showed a remarkable and significant 18.4% absolute increase in the number of patients achieving an excellent neurologic outcome, defined as modified Rankin Scale (mRS) score of 0-1, after treatment with intra-arterial alteplase immediately following thrombectomy. This was despite the fact that the study was stopped early because of difficulty obtaining placebo supplies during the pandemic, having only enrolled 121 of the planned 200 patients.

This benefit was achieved without any increase in intracranial hemorrhage, which Chamorro described as “reassuring.”

He explained that although mechanical thrombectomy gives a high rate of successful reperfusion, only about 27% of patients achieve complete freedom of disability (mRS 0-1) at 3 months. He suggested this may be the result of impaired reperfusion of the microcirculation despite complete recanalization of the occluded vessel.

The researchers postulated that thrombi could persist within the microcirculation in patients with normal or nearly normal cerebral angiograms at the end of thrombectomy, and that these smaller thrombi may be dissolved by a dose of intra-arterial thrombolysis.

The CHOICE study was greeted with enthusiasm from commentators at the ISC meeting. Louise McCullough, MD, chair of the late-breaking science session at which the study was presented and ISC program chair, described the results as “very dramatic and very exciting.”

“The CHOICE trial is going to be a highlight of the meeting because it could change care now,” McCullough said. “By just giving a little adjunctive tPA after the main clot is out, everybody seems to benefit, and there was no increased risk in bleeding. I think that’s the one that people are going to take back to their practice. But it was a very small trial, so you have to be cautious.”

Commenting for theheart.org | Medscape Cardiology, Panagos added: “This study addresses a well-described finding from many of the interventional trials, that despite excellent outcomes in recanalization, patients don’t do as well as predicted. The thought is that either re-stenosis or propagation of smaller clots downstream from the original clot in small-caliber vessels [is what] causes additional, unintended damage. The use of intra-arterial thrombolysis after recanalization may assist in dissolving those smaller, downstream clots and debris and improve outcomes.”

But he pointed out that enthusiasm over these results must be matched with some concerns, including the small study size and wide confidence intervals — so larger, randomized studies will be required to confirm and change current clinical practice.

The CHOICE trial was conducted in seven centers in Catalonia, Spain.

For the study, patients with large vessel occlusion acute ischemic stroke treated with thrombectomy within 24 hours after stroke onset and who had achieved successful reperfusion (an expanded TICI angiographic score of 2b50 to 3) were randomly assigned to receive intra-arterial alteplase (0.225 mg/kg; maximum dose, 22.5 mg) infused over 15 to 30 minutes or placebo.

Because of the lack of continued availability of placebo supplies, the study had to be stopped early after 121 patients were enrolled (65 alteplase; 56 placebo), and after a few dropouts who did not receive treatment, the analysis was performed on 61 patients who received alteplase and 52 given placebo.

The improved clinical outcomes in the alteplase group were seen despite only minor differences between the treatment groups in angiographic scores or in other surrogate imaging, Chamorro pointed out, suggesting that the improved functional outcome may be explained by an amelioration in the microcirculatory reperfusion.

for 15-30 minutes at the dose used. Of note, 60% of the study population had also received IV alteplase before thrombectomy.

In the JAMA study, the authors report that current guidelines recommend that all eligible patients receive intravenous alteplase before thrombectomy, and the results of this trial do not contradict this recommendation.

“The study results support the safety of adjunct intra-arterial alteplase in patients with successful reperfusion at the end of thrombectomy, including in patients treated previously with intravenous alteplase, although the findings on effectiveness should be interpreted as preliminary, requiring replication

before any recommendations for practice change,” they conclude.

Chamorro said that his group was now planning a second larger trial, CHOICE-2.

In an accompanying editorial in JAMA, Pooja Khatri, MD, MSc, University of Cincinnati, Ohio, says “the 18% treatment effect observed in this 113-patient trial is remarkable.”

However, she cautions that consideration of its clinical implications must be tempered because of the lack of precision of the effect estimate, given wide 95% confidence intervals, the small sample size, and the observation that trials with early termination are well known to overestimate treatment effect.

But she acknowledges that the results suggest “that additional reperfusion therapy may be warranted after relatively successful mechanical thrombectomy of large vessel occlusions, whether to treat the residual primary thrombus, more distal arterial occlusions, or perhaps even microthromboses.”

Khatri notes that this approach runs counter to the recent movement to consider bypass of intravenous alteplase altogether in thrombectomy-eligible patients and suggests that additional or perhaps more targeted thrombolysis will be the most beneficial approach.