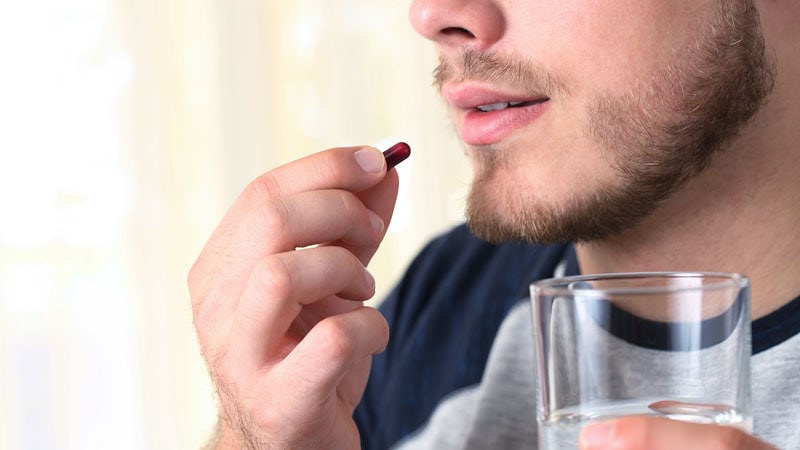 ATLANTA — Potential once-daily male oral contraceptives have passed a first clinical hurdle, showing a degree of testosterone suppression that should be sufficient for a contraceptive effect without causing symptomatic hypogonadism, according to phase 1 study results to be presented at ENDO 2022.

There are two pills in development and the studies so far suggest that both or a combination might be able to provide an acceptable balance of efficacy and tolerability, according to Tamar Jacobsohn, BS, a researcher in the Contraceptive Development Program, Eunice Kennedy Shriver National Institute of Child Health and Human Development, Bethesda, Maryland.

The two drugs evaluated in this study are dimethandrolone undecanoate (DMAU) and 11b-methyl-19-nortestosterone-17b-dodecylcarbonate (11b-MNTDC). Both are bifunctional prodrugs with androgenic and progestogenic effects. The prodrugs are designed to be cleaved after ingestion so that the active hormones are released over 24 hours, permitting once-daily dosing.

However, she noted that there is still a long way to go on this research path. While the phase 1 studies have shown tolerability, the biology involved in suppressing sperm production suggests that men would need to take these pills daily for about 3 months at the very beginning of contraceptive treatment, until adequate sperm suppression is achieved to prevent pregnancy.

“We are working toward a phase 2 trial that will include a contraceptive efficacy endpoint, but there are lots of steps to get there, including more early phase studies,” she noted.

“There is a huge unmet need in terms of male contraceptive methods,” said Arthi Thirumalai, MBBS, an endocrinologist and assistant professor of medicine at the University of Washington School of Medicine in Seattle.

Senior author of a 2020 review article on male contraception, Thirumalai said in an interview that prodrugs and other hormonal methods to lower testosterone and suppress sperm production are attractive because of convenience, efficacy, and reversibility,

“We hope that oral formulations can be used to address this need,” said Thirumalai, who has participated in several experimental and clinical studies of male contraception methods. She is, in fact, one of the many coauthors of the data presented by Jacobsohn.

Jacobsohn emphasized: “Development of an effective, reversible male contraceptive method will improve reproductive options for men and women, have a major impact on public health by decreasing unintended pregnancy, and allow men to have an increasingly active role in family planning.”

Phase 1 Results With DMAU and MNTDC

The work that led to phase 1 studies suggested that each of the drugs — DMAU and MNTDC — might provide adequate hormone suppression to reduce sperm counts without inducing unacceptable symptoms of hypogonadism. To test this potential, dose-ranging phase 1 studies with an endpoint of testosterone suppression were conducted with each one.

Efficacy was evaluated by measuring testosterone levels. Tolerability was largely based on patient questionnaires.

At the end of 7 days, testosterone levels remained at reference levels (400 to 600 ng/dL) in those who received placebo. The levels fell to <100 ng/dL in all subjects assigned to an active agent regardless of which agent or dose.

The difference in degree of testosterone suppression did not appear to influence tolerability.

Subjects on four vs two daily pills “did not report a significant difference in general satisfaction or their willingness to use the pills in the future or recommend them to other men,” said Jacobson, presenting P values for these outcomes among subjects on active therapy relative to placebo that were not significant, ranging from 0.48 to 0.85.

Overall, there were no serious adverse events. Mild side effects associated with hypogonadism did occur, but “all resolved by the end of the study,” she said.

Zero Sperm Production Is Not the Goal. Lowering It Sufficiently Is

Thirumalai said the need for a male contraceptive is strong. While condoms have a substantial failure rate, vasectomy is not reliably reversible even though the majority of men agree that the responsibility for preventing pregnancy should be shared, she said.

Thirumalai’s earlier review article found that clinical trials of hormonal suppression to provide male contraception have been conducted for at least 30 years. The challenge has been finding an effective therapy that is well tolerated.

Drugs that combine both androgenic and progestogenic activity might be the answer. By manipulating hormones that lower testosterone, sperm production is reduced without eliminating a man’s ability to ejaculate. Zero sperm production is not the goal, according to data in Thirumalai’s review article.

Rather, studies suggest that when ejaculate contains less than 1 million sperm per mL (levels typically range from 15 to 200 million sperm/mL), the antipregnancy efficacy is similar to that achieved with female oral contraceptives.

However, clinical trials to demonstrate that this can be achieved safely have yet to be conducted.

Jacobsohn said that sperm half-life is about 3 months. This means that patients would need to be on hormonal therapy for a period of about this duration before reliable contraception is achieved.

In other words, the efficacy endpoint used in this current study [of 28 days duration] does not ensure effective contraception, but Jacobsohn suggested this is nevertheless an important step forward in clinical development.