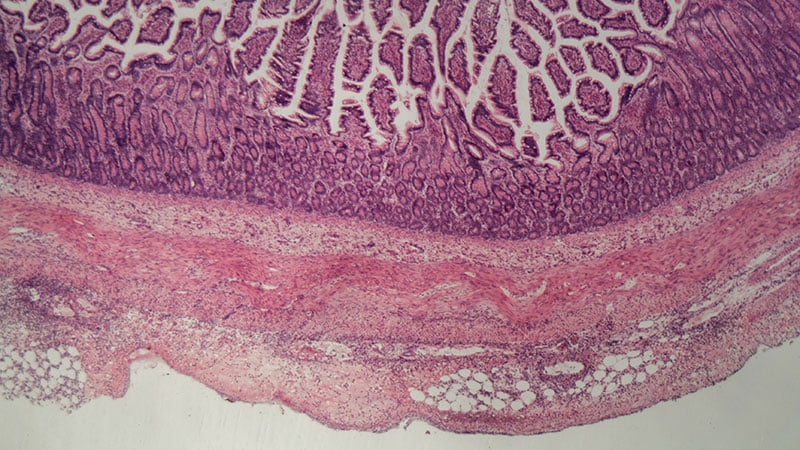 A gastroenterology research group led by a vice dean at a medical school has requested that a journal correct a paper with an image duplicated from an earlier study by the same group, Retraction Watch has learned. The journal has not yet determined what kind of notice to place on the article.

Uma Sundaram, vice dean of research and graduate education at the Joan C. Edwards School of Medicine of Marshall University in Huntington, W. Va. and chair of the department of clinical and translational science, is corresponding author on both of the papers that share an image. Sundaram also has a dual appointment at a VA medical center in Huntington.

The comment that prompted Sundaram’s email to us was posted on our story about Joseph I. Shapiro, who was then the dean of Marshall University’s medical school. Shapiro, who has racked up five retractions to date, had announced plans to step down as dean before our story, and is still a professor at the university. Another expression of concern was published for one of his papers earlier this month.

Sundaram told us he expected to be considered for Shapiro’s former job, and was worried about the potential impact the comment identifying the duplicated images could have on his chances.

The first paper, “Mast cell regulation of Na-glutamine co-transporters B0AT1 in villus and SN2 in crypt cells during chronic intestinal inflammation,” was published in BMC Gastroenterology in 2015. The later paper, “Cyclooxygenase pathway mediates the inhibition of Na-glutamine co-transporter B0AT1 in rabbit villus cells during chronic intestinal inflammation,” appeared in PLOS ONE in 2018. It does not yet have a correction or editorial notice. The two papers have been cited nearly 30 times, according to Clarivate’s Web of Science.

Sundaram told us he had his coauthors had discovered the duplicated image before the comment was posted and before his employer received the allegation:

As we were preparing the next manuscript for submission in these series of studies, we (myself, Dr. Arthur and Dr.Singh) were reviewing our published work to date, we noted the accidental error in the Plos publication and notified the journal. The study methodologies and the templates we use to report the results are similar in these series of papers. But, the data, is specific for each publication. The data in BMC paper of 2015 is not in question as it predated the Plos paper. During the preparation of Plos paper, as Drs. Arthur and Singh were replacing old data panel from the BMC paper with the new one for the Plos paper, and panel in Figure 4 was inadvertently not replaced. This is an error that we did not catch at the time of the Plos publication in 2018. To the best of our knowledge, we have not made such an error in three decades of research. Nevertheless, we took responsibility for this oversight and proactively corrected it.

The Veterans Health Administration Office of Research Oversight received the anonymous allegation about the reused image in June of this year, according to the memos Sundaram provided to us. Our story was posted on June 8, and the anonymous comment about the papers was posted there on June 14. PLOS tells us that the journal received the request on June 17th. Sometime that month, the VA oversight office also launched a joint inquiry with Marshall University, according to memos Sundaram provided us.

A memo on VA letterhead dated August 25 from the research misconduct inquiry committee describes their initial findings that “based on the appearance of the bands and artifacts from the blots, it is probable that the images are duplicated.” The committee also summarized Sundaram’s response:

Dr. Sundaram reports acknowledgement of the error and that his lab has already taken steps to rectify the inclusion of the duplicate blot in the later paper prior to notification of the research misconduct inquiry. The inclusions in Dr. Sundaram’s response corroborate the timeframe outlined in the response. The correction to the PLoS One article is in process at the time of writing this memo.

The committee decided not to pursue a full inquiry into the complaint, given that the correction was purportedly in progress:

Dr. Sundaram’s lab duplicated a blot figure in the two manuscripts listed above. However, upon realization of the error, the respondent took appropriate steps to rectify the error with PLoS One prior to being notified of the research misconduct inquiry. In light of the rectifiable actions taken by the respondent’s lab, the committee does not feel that a full inquiry into the above complaint is warranted. The recommendation of the committee is to keep the current case open until the corrections submitted by Dr. Sundaram are formally published in PLoS One, after which it can be closed.

In another memo about the inquiry dated September 10, Marshall University’s vice president for research John M. Maher wrote more definitively that the committee found “the instance was not research misconduct” and “the matter is considered closed.” He continued:

In summary, Dr. Sundaram and his colleagues did not commit research misconduct, but instead offered exemplary vigilance and diligence in detecting and correcting a mistake in published work.

We asked PLOS spokesperson David Knutson about the status of the correction Sundaram requested. He told us the editors hadn’t decided what type of notice to issue yet:

We are working toward addressing the image duplication issue, as per the authors’ request. However, we cannot speak as to what type of notice we will issue because our editorial assessment and follow-up discussions are still ongoing.