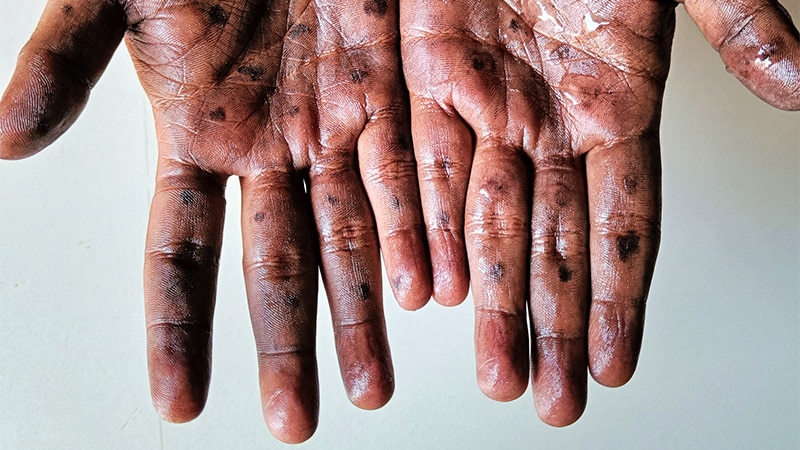 New areas of concern include transmissions among people experiencing homelessness and severe cases in immunocompromised persons.

Agam K. Rao, MD, with the Poxvirus and Rabies Branch of the Centers for Disease Control and Prevention (CDC), updated the global picture Wednesday at IDWeek: As of October 14, the confirmed worldwide cases number 73,288, with more than one third of them (27,317) in the United States. Case counts in the US, however, have been decreasing since early August.

Cases have been most commonly found in men who have sex with men (MSM), though monkeypox has also been diagnosed in cisgender and transgender women, children, and men who do not report recent sex with other men.

Shift Away From White Men

“There’s a lot of emphasis right now at CDC to try to understand these spreads, whether they are household (transmission) or another contact. We know that some of the women have had sexual contact with men who were diagnosed with monkeypox,” Rao said.

In children under age 12, direct skin-to-skin contact with household members seems to be the source, she said. In adolescents, as in adults, the main source seems to be male-male consensual sex.

“And just as in adults, Black and Hispanic children have been disproportionately affected,” she said.

No Sustained Spread Outside MSM

Rao said that so far, there has been no sustained spread detected beyond the MSM community. A CDC study of inmates in Cook County Jail in Chicago, Illinois, at the end of September, she noted, found no secondary cases.

However, healthcare workers are another group that was suspected to be at higher risk given close contact with patients, although there have only been three confirmed exposures. Sharps injuries from unroofed lesions are tied to some of those confirmed or suspected cases.

“We do not recommend unroofing lesions,” she said. “We’re getting very good samples from just rigorous swabbing of the lesions.”

She said that the CDC is also monitoring “a few hundred” cases, some of them severe, among people experiencing homelessness.

“We are working to try to understand the exposures that have occurred to those individuals and whether transmission has occurred person-to-person,” Rao said.

Also of concern are people with compromised immune systems owing to advanced HIV or organ or stem cell transplants.

Boghuma Titanji, MD, MSc, PhD, a physician-scientist at Emory University in Atlanta, Georgia, and an emerging-disease specialist, addressed the difference in presentations between immunocompromised and immunocompetent patients.

She said the main distinction is the extent of the lesions. Patients with AIDS and very low CD4 counts, for instance, are presenting with more lesions and have a longer course of illness.

Rao told Medscape Medical News, “It’s really important to understand someone’s immune status and understand whether they are severely immunocompromised. If there is a concern that a person has monkeypox, also testing for HIV concurrently may be important. It could be a missed opportunity to not evaluate for it, especially given the fact that these can occur together.”

Assessing the size and appearance of the lesions is important to understanding whether patients could develop severe infection, she said.

Differences From Past Epidemics

Titanji said the current outbreak has some differences from historic outbreaks.

There are also more cases of presentations with only single lesions, which were infrequent in past epidemics, she said.

The scope of suspected cases has also broadened, with changing clinical features.

“We have expanded the clinical descriptions to include presentations that involve isolated rectal presentation — individuals presenting solely with rectal pain as the primary manifestation of monkeypox — or presenting with a sore throat as the only manifestation,” she said.

Expanding the case definition will help identify who should be tested.

“Monkeypox is an incredible clinical mimic,” Titanji said. “The rash can really take the form of a lot of the things we encounter on a regular basis in ID. It’s important to always have a low index of suspicion to test patients when they fit the right epidemiological profile.”

Brett Petersen, MD, MPH. captain of the US Public Health Service with the CDC, said that Jynneos, licensed by the US Food and Drug Administration, continues to be the primary vaccine for monkeypox.

However, the strategy has changed.

Whereas the initial vaccine strategy was to administer the vaccine after known exposure, the guidance now includes vaccinating after “both known and presumed exposures, as described in the eligible populations.”

It’s now been expanded even further to include preexposure inoculations for a wide group of people at greater risk, he explained

Early data from the CDC indicate that the Jynneos vaccine is effective.

In a report last month, the CDC found that among 32 US jurisdictions, monkeypox incidence was much higher among at-risk, unvaccinated people for whom vaccination is recommended than among those who got the Jynneos vaccine.

“Unvaccinated people had 14 times the risk of monkeypox disease compared to people who were vaccinated,” the CDC reported.

Asked about the end goal for monkeypox, Petersen said, “Our goal should be elimination. I think that is an achievable goal, but it will depend on a lot of factors and a lot of continued public health efforts.”