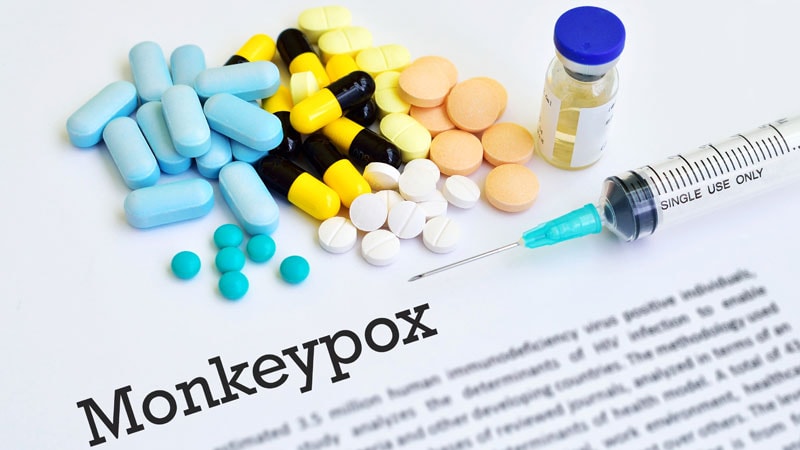 People with monkeypox face a wide range of symptoms, from mild skin lesions to severe, debilitating pain. And experts have no reliable way yet to predict who will have the worst symptoms.

There is an antiviral treatment, tecovirimat (TPOXX), but it’s only available from the Strategic National Stockpile at the moment. The FDA approved tecovirimat to treat smallpox in 2018 over concerns that it might be used as a bioterrorism weapon someday.

Local health departments are working with the CDC and the U.S. Department of Health and Human Services to request tecovirimat through a complicated, 120-page protocol. At the same time, monkeypox cases have risen to more than 11,000 worldwide, according to the CDC.

And even though monkeypox is a global concern, some places in the U.S., like New York City, are seeing larger outbreaks.

“As of yesterday, we are now up to 336 cases in New York City alone – and that is a tripling of our cases, essentially, over the past week,” Mary Foote, MD, said at a news briefing sponsored by the Infectious Diseases Society of America.

“Just to be very clear, we do not believe that this count [reflects] the true burden of disease. There are a lot of cases that are not being diagnosed,” said Foote, medical director of the Office of Emergency Preparedness and Response for the New York City Department of Health and Mental Hygiene.

“We do think this is a genuine exponential increase in cases that will probably continue for a while,” she said.

Soaring Case Numbers Are the Result of Slow, Inadequate Response to the Outbreak, Experts Say

“If this is a trial run post-COVID to see if we are better, I don’t think it is going that well,” Amesh Adalja, MD, a senior scholar at the Johns Hopkins Bloomberg School of Public Health’s Center for Health Security in Baltimore, said in an interview. “The CDC response leaves a lot to be desired.”

The slow response to growing monkeypox cases is even more puzzling, Adalja says, because we already had all the tools needed to contain the spread. “This should have been a home run after COVID-19: a not very transmissible disease for which we have off-the-shelf vaccines, off-the-shelf antivirals, and diagnostic tests that already existed,” he said.

Accessing Treatment Can Be Challenging

Health officials in New York are requesting treatment for the estimated 20% to 25% of patients with monkeypox who meet certain guidelines.

But the problem is that the drug can only be prescribed through a cumbersome new process called the “expanded access investigational new drug protocol.”

“It’s quite complex … and very time-consuming to complete all this paperwork,” Foote said.

Because of these requirements, it’s mostly state health departments and large academic health systems that have the resources to apply through this protocol.

Also, with all the forms and administrative requirements, a patient visit to start monkeypox treatment can take anywhere from 1½ to 3 hours, Foote estimated. “In a busy community clinic, urgent care center, or emergency department where most of these patients are being seen, this is nearly impossible to implement.”

What’s more, tecovirimat was not tested in humans.

“For obvious reasons, you can’t do a randomized controlled trial with smallpox or monkeypox, so it’s based on an animal model,” Foote said. But animal evidence suggests 90% to 100% effectiveness at preventing death.

Human data on tecovirimat is limited to a few case reports, but so far, signs are positive.

“Anecdotally, the clinical response has been very good,” Foote said. “Many patients have reported significant improvement in their symptoms within just a few days.”

She said patients appear to be tolerating the drug well, with some headaches and nausea but no serious side effects reported.

“Excruciating Pain” and Other Symptoms

Many doctors learned in medical school that monkeypox is a mild disease that goes away on its own, “and many people have said that about this outbreak as well,” Foote said. “But the reality on the ground is a lot of people with this infection are really suffering, and some actually may be at risk for permanent damage and scarring.”

“We’ve seen many people with symptoms that are so severe that they are unable to go to the bathroom, urinate, or eat without excruciating pain,” she said.

Greater awareness about monkeypox is needed among patients and providers, said Lilian Abbo, MD, who also spoke at the news briefing. Many infected people jump from one clinical setting to another before getting a diagnosis.

Foote agreed. “It’s really been striking to me, how many of these patients have had difficulty getting the care they need to treat these symptoms – having to go between clinics, hospitals and urgent care centers – never getting referred to us,” said Foote.

So far, most monkeypox cases reported to the CDC are among men who have sex with men. “This is a very savvy community that is great at advocating for themselves,” Foote said. “And they are really standing up and saying, ‘Hey, you need to take this seriously.'”

Abbo said monkeypox is already spreading beyond this community.

“This feels a little bit like when the HIV epidemic started. I don’t want to create stigma around men who have sex with men – we’re seeing the spread already in women, and other countries have reported this in children.”

“We need to take care of entire population, she said. Even if it starts with one group, “it will spread to the rest.”

Access to testing has been challenging as well, Abbo said. Photos of monkeypox lesions are sometimes required to get a test authorized, and “it can take up to 8 hours to get approval after multiple layers and phone calls.”

In addition to public health department testing, commercial labs started offering the monkeypox test last week, but there is a cost, Abbo said. She estimated each commercial test costs $90 to $100.

“We’re also trying to set up in-house testing,” she said.

Some universities have already done that, but they face challenges due to the supply chain shortages.

Now, Aegis Sciences, LabCorp, Mayo Clinic Laboratories, and Quest Diagnostics offer testing for monkeypox. The tests need to be ordered by a health care provider; a patient cannot go to a laboratory location on their own to request a test. Each company has specified one laboratory nationwide where all samples can be sent.

“It’s just not a response that is adequately urgent for the need to contain this virus,” says Jennifer Nuzzo, DrPH, the director of the Pandemic Center at Brown University School of Public Health in Providence, RI.

Vaccination also can help prevent monkeypox infection or, if given early enough, prevent severe disease among those who already have monkeypox. But there are challenges there too, experts said.

The New York City Health Department was first to offer expanded vaccine protection for people at high risk for exposure to monkeypox.

“And the demand has been very, very high – overwhelming at this point. There’s a limited supply nationally,” Foote said.

Health officials in New York and elsewhere are working with federal partners, clinics, and community health organizations to get vaccines to the people at highest risk in an equitable way, she said.

People who treat people with monkeypox also have a higher risk for infection, Abbo said. Many people are asking about vaccinating health care workers, she said. “We’re in constant exposure, examining patients.”

Health care workers could likely end up classified as high-risk if or when such categories or guidelines are created, Abbo said. This strategy could help get scarce resources to the right places as well.

Until vaccines become more available, more testing is needed to ease the spread of monkeypox. “We really need a strategy to make sure that anyone who needs a test can get one as easily as possible,” Nuzzo says, “because right now, with a shortage of vaccines and therapeutics, that’s our primary intervention: testing people so that they can isolate and stay at home for as long as they’re contagious.”

Abbo also pointed out that health care workers were already feeling the stress of managing COVID-19 before the monkeypox outbreak.

“This is also the burnout of the nurses, the physicians, the laboratory technicians, everyone who has been working nonstop for the last 2 years with the COVID pandemic. Now, we have to focus still on COVID and on this new outbreak.

“Please understand that we appreciate everything that the government is doing,” Abbo said, “but we do need help with the treatment and access to rapid diagnosis.”

“We know outbreaks are becoming more frequent. There’s a whole body of public health literature to look at the reasons why,” she said.

Reasons include globalization, environmental decline, and more. She listed the Zika virus, Ebola, COVID-19, meningitis, and now monkeypox “over the last couple of years.”