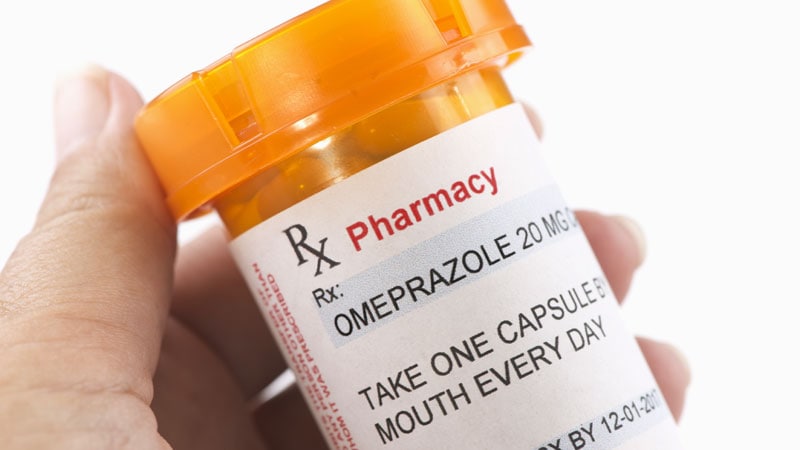 Controversy regarding the purported link between the use of proton pump inhibitors (PPIs) or histamine H2 receptor antagonists (H2RAs) and risk for dementia continues.

Adding to the “no link” column comes new evidence from a study presented May 23 at Digestive Disease Week (DDW) 2022, a conference held virtually and in San Diego, California.

Among almost 19,000 people, no association was found between the use of these agents and a greater likelihood of incident dementia, Alzheimer’s disease, or cognitive decline in people older than 65 years.

“We found that baseline PPI or H2RA use in older adults was not associated with dementia, with mild cognitive impairment, or declines in cognitive scores over time,” said lead author Raaj Shishir Mehta, MD, a gastroenterology fellow at Massachusetts General Hospital in Boston.

“While deprescribing efforts are important, especially when medications are not indicated, these data provide reassurance about the cognitive impacts of long-term use of PPIs in older adults,” he added.

As PPI use has increased worldwide, so too have concerns over the adverse effects from their long-term use, Mehta said.

“One particular area of concern, especially among older adults, is the link between long-term PPI use and risk for dementia,” he said.

Igniting the controversy was a February 2016 study published in JAMA Neurology that showed a positive association between PPI use and dementia in residents of Germany aged 75 years and older. Researchers linked PPI use to a 44% increased risk of dementia over 5 years.

The 2016 study was based on claims data, which can introduce “inaccuracy or bias in defining dementia cases,” Mehta said. He noted that it and other previous studies also were limited by an inability to account for concomitant medications or comorbidities.

To overcome these limitations in their study, Mehta and colleagues analyzed medication data collected during in-person visits and asked experts to confirm dementia outcomes. The research data come from ASPREE, a large aspirin study of 18,846 people older than 65 years in the United States and Australia. Participants were enrolled from 2010 to 2014. A total of 566 people developed incident dementia during follow-up.

The researchers had data on alcohol consumption and other lifestyle factors, as well as information on comorbidities, hospitalizations, and overall well-being.

“Perhaps the biggest strength of our study is our rigorous neurocognitive assessments,” Mehta said.

They assessed cognition at baseline and at years 1, 3, 5, and 7 using a battery of tests. An expert panel of neurologists, neuropsychologists, and geriatricians adjudicated cases of dementia, in accordance with DSM-IV criteria. If the diagnosis was unclear, they referred people for additional workup, including neuroimaging.

All analyses were adjusted for age, sex, body mass index, alcohol use, family history of dementia, medications, and other medical comorbidities.

At baseline, PPI users were more likely to be White, have fewer years of education, and have higher rates of hypertension, diabetes, and kidney disease. This group also was more likely to be taking five or more medications.

During 80,976 person-years of follow-up, there were 566 incident cases of dementia, including 235 probable cases of Alzheimer’s disease and 331 other dementias.

“Similarly, when we look specifically at Alzheimer’s disease or mixed types of dementia, we find no association between baseline PPI use and dementia,” Mehta said.

When they excluded people already taking PPIs at baseline, they found no association between starting PPIs and developing dementia over time.

To determine whether any association could be a class effect of acid suppression medication, they assessed use of H2RA medications and development of incident dementia. Again, the researchers found no link.

A diverse multinational population from urban and rural areas was a strength of the study, as was the “very rigorous cognitive testing with expert adjudication of our endpoints,” Mehta said. In addition, fewer than 5% of patients were lost to follow-up.

In terms of limitations, this was an observational study “so residual confounding is always possible,” he added. “But I’ll emphasize that we are among the largest studies to date with wealth of covariates.”

Why the Different Findings?

Moayyedi, a professor of medicine at McMaster University in Hamilton, Ontario, Canada, asked Mehta why he “found absolutely no signal, whereas the German study did.”

“It’s a good question,” Mehta responded. “If you look across the board, there have been conflicting results.”

The disparity could be related to how researchers conducting claims data studies classify dementia, he noted.