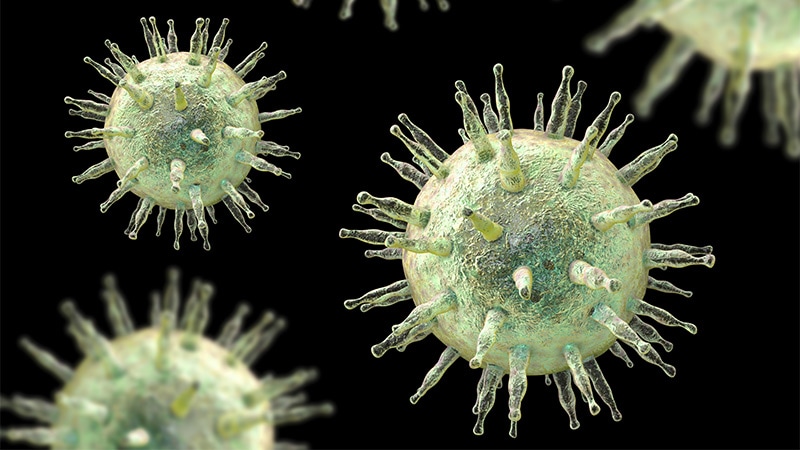 Epstein-Barr Virus (EBV) is a suspect in the development of multiple sclerosis (MS), and recent research developments have strengthened that connection. In 2022, two studies received quite a bit of attention. One showed that EBV seroconversion occurs in the years prior to MS diagnosis in virtually every patient, and that serum levels of the neuronal damage biomarker neurofilament light (NfL) rose following EBV infection. Another paper showed anti-EBNA (Epstein-Barr nuclear antigen) antibodies in the cerebrospinal fluid cross-react with the central nervous system antigen GlialCAM in some MS patients.

Based on those studies, “it’s tempting to speculate that primary EBV infection could be a trigger to the autoimmune process suspected for MS,” said Tilman Schneider-Hohendorf, PhD, during a presentation at the annual meeting of the European Committee for Treatment and Research in Multiple Sclerosis (ECTRIMS).

Schneider-Hohendorf, who is a postdoctoral fellow at the University of Münster, Germany, presented a new study that added more evidence that EBV may be a key player in MS pathogenesis. He and colleagues conducted a genetic analysis of patient T cells and found evidence that EBV viral activity may be occurring during MS.

A Viral Pathway to MS

Asked for comment, Bruce Cree, MD, PhD, said: “I think it is a very interesting one, because what we know about EBV is that it’s a risk factor for MS. So many studies performed over the last 20 years have shown a very strong association between EBV infection and the occurrence of MS. Studies have shown quite conclusively that EBV infection precedes MS in almost every patient, and that EBV infection is followed by a rise in serum NfL, which is a biomarker of neuronal damage. You have EBV infection, and then typically several years later a rise in serum concentrations of this marker of neuronal injury, and this is all in a presymptomatic state. Then that is followed by the onset of clinical symptoms in MS. That temporal sequence, I think, is very convincing,” said Cree, who is a professor of clinical neurology at the University of California, San Francisco.

He pointed out that EBV is not the sole causal pathway of MS, since genetic and environmental factors are known to be involved. “Nonetheless, it’s very strong evidence to indicate that this virus is involved in disease pathogenesis,” said Cree.

The new research takes the work a step further by revealing a population of T cells in MS patients that appear to be responding directly to EBV during active viral disease. That could be telling because most people who experience an EBV infection and experience mononucleosis recover, and some never even realize they have been infected. As a herpes virus, EBV remains in a latent state in B cells and other immune cells. “We know that you need an EBV infection (to trigger MS), but is EBV in some way continuing to be active in MS?” said Cree.

Other groups have looked for such evidence, but results have been mixed. Cree’s own group looked for evidence of EBV in spinal fluid of MS patients when they first present with symptoms, and could find no evidence. On the other hand, an autopsy study of MS patients has found evidence of chronic EBV infection in and around the brain, including the meninges, which could implicate the B cells found in that region. Another study found EBV-targeting antibodies that cross react with neuronal antigens in the cerebral spinal fluid of MS patients. “So depending on the assay used and the types of investigation, there is variable evidence to indicate that EBV has a role in ongoing MS pathogenesis – that it isn’t just a risk factor for MS that triggers the disease but potentially has a role in determining the course of MS,” said Cree.

Is EBV Part of MS Pathogenesis?

The new study presented at ECTRIMS by Schneider-Hohendorf offered evidence that MS patients have excess CD8-positive T cells that recognize EBV antigens typically shed during active viral infection. The results suggest “that the immune system is responding to that chronic infection,” said Cree.

The findings have some implications for a clinical study now in progress, called EMBOLD, which is looking at whether a heterologous infusion of T cells that have been primed to attack EBV could improve symptoms of progressive MS. “The hypothesis there is that chronically infected cells within the body are causing progressive MS and that if we could eradicate those cells, both within the central nervous system and within the periphery, perhaps we could see improvement in MS functional outcomes,” said Cree, who is a co-investigator for the EMBOLD study. The trial is using T cells from donors that are matched for the human leukocyte antigen complex, which is hoped will target and kill EBV-infected cells.

The study presented by Schneider-Hohendorf supports the approach. “There is an implication from this study that the trial that that’s currently being conducted might actually possibly have a benefit in the sense that there’s now another piece of evidence to indicate that EBV is not only a risk factor for MS, but may actually participate during the course of the disease as part of the pathogenesis,” said Cree.

In the new study, the researchers sequenced the T-cell receptor variable beta-chain (TRBV) peripheral repertoire among three cohorts of MS patients: A discovery cohort with 1,336 patients with MS and 229 controls; a validation cohort with 59 patients with MS and 51 controls; and 35 monozygotic twins who were discordant for MS. They identified sequences known to bind to EBV, SARS-CoV-2, cytomegalovirus, and influenza A, and used the latter three viruses as a proof of concept to demonstrate the validity of the approach. EBV-specific MHC-1 restricted CD8 TRBV in the serum of MS patients, with large effect sizes in the discovery (+2.2), validation (+2.1), and MS twin (+1.6) populations. The findings in the twin population rule out a genetic or environmental explanation for the findings in the discovery and validation cohorts, according to Schneider-Hohendorf.

The researchers also sequenced CSF among six healthy donors and five patients with MS and found significant differences. The T-cell populations had more lytic properties that suggested ongoing immune surveillance. “We can conclude that we found a broader response that could indicate an aberrant immune response. This could be a remnant of disease triggering an event or it could indicate an ongoing immune response to EBV. Is this EBV activity? We really don’t know. To find out, we would expand our pathogen-specific sequences, we would assess CNS tissue and lesions, and we would define the primary response in pediatric cohorts to better understand what might go wrong,” Schneider-Hohendorf concluded.