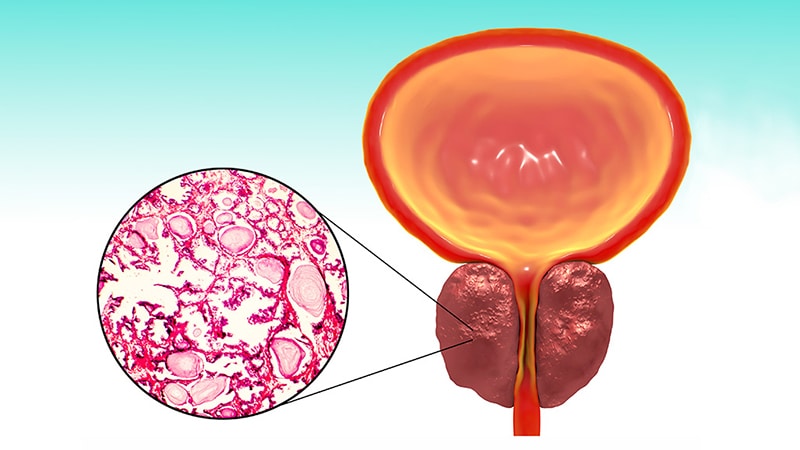 SAN ANTONIO — Patients with high-risk prostate cancer can be safety treated with a shorter hypofractionated radiotherapy regimen without compromising overall and disease-free survival outcomes, suggest long-term results from a phase 3 trial from Canada.

“That’s 3 weeks of not having to come to the clinic — the transportation, parking costs, and just the time it takes away from a person’s day-to-day life,” commented study presenter Tamim M. Niazi, MD, an associate professor of oncology at McGill University, Montreal, Quebec, Canada. “Our trial found no benefit to the extra 3 weeks.”‘

Reacting to the presentation on Twitter, several oncologists wondered whether these new long-term results would lead to a shift in clinical practice.

Martin Ma, MD, PhD, a radiation oncologist at UCLA Health, Los Angeles, California, said the results are “one more step in the right direction” for patients with high-risk prostate cancer. He too wondered whether it spells the “end of an era” for conventional regimens.

After a median of 7 years of follow-up, the rates of overall, prostate cancer–specific, biochemical recurrence-free, and distant recurrence-free survival were virtually identical between the two treatment arms, with hazard ratios of around 1.

Moreover, rates of gastrointestinal and genitourinary toxicities, almost all of which were classified as grade 1 or 2, were broadly similar across the study, despite an initial peak of acute toxicities among patients given the hypofractionated regimen.

Hypofractionated radiotherapy is “as effective as conventional fractionation” and has “similar and acceptable toxicity,” Niazi concluded.

Moderate hypofractionated radiotherapy “should be considered as a new standard of care for high-risk prostate cancer patients considered for external-beam radiation therapy and long-term androgen deprivation therapy,” he added.

“Many of us already incorporate this into our clinical practice, but now we have the 7-year data to back us up,” commented study discussant Sophia C. Kamran, MD, assistant professor for radiation oncology, Harvard Medical School, Boston Massachusetts.

Kamran, who was not involved in the study, said the study “tells us that moderate hypofractionation for high-risk prostate cancer is safe, with comparable cancer control to standard fractionation.”

Nevertheless, there are “some open questions that remain,” Kamran said.

“Notably, treatment wasn’t shortened by much. It went from 7 weeks to about 5 weeks. The question is: If we further hyperfractionated or further shorten the treatment, does that lead to increased efficacy or increased toxicity?”

She also wondered whether radiation to the pelvic nodes, which was administered to all patients in the current trial, could be hypofractionated.

“Does that lead to increased efficacy or increased toxicity? Again, it remains to be seen and is being actively studied now” in other trials, she said.

Details of the Results

The majority of previous studies that investigated the use of moderate hypofractionated radiotherapy for patients with prostate cancer have focused on patients with low- or intermediate-risk disease, or they included mixed cohorts, Niazi commented.

He emphasized that this trial focused on patients with high-risk prostate cancer, with stage T3a+ disease, a prostate-specific antigen (PSA) level of ≥20, and a Gleason score of 8–10. A total of 329 patients were recruited from 12 sites in Canada.

The median age of the patients was 72 years, and the two treatment arms were well balanced in terms of T stage, PSA level, Gleason score, and quality-of-life measures.

Niazi reported that after 7 years of follow-up, overall survival was virtually identical between the standard and hypofractionated radiotherapy arms, at 82.0% vs 81.7% (P = .76). There was also no appreciable difference in prostate cancer–specific mortality, at 96.4% vs 94.9% (P = .61).

Biochemical recurrence-free survival was also similar between the two arms, at 85.1% with standard radiotherapy and 87.4% among patients assigned to hypofractionated radiotherapy (P = .69), while rates of distant metastasis-free survival were 91.8% and 91.5%, respectively (P = .76).

Regading safety, there was “minimal” grade 3 toxicity and “no grade 4 toxicity” in either treatment arm, Niazi reported.

Rates of grade ≥1 and grade ≥2 genitourinary-related acute toxicity were also numerically higher with hypofractionated radiotherapy, but the differences did not reach statistical significance.

Despite the initial peaks of gastrointestinal and genitourinary acute toxicity being higher with hypofractionated radiotherapy, they plateaued after around 8 months and approached the rates seen with standard radiotherapy, Niazi reported.

Late toxicities, whether gastrointestinal or genitourinary, were again almost exclusively of grade 1 or 2, and there were no significant differences in rates between the two treatment arms.

Niazi said that there are two potential future directions for this research: one is to further explore reducing the fractions to as few as five treatments, an approach known as ultra-hypofractionation; the other involves intensifying the hormonal therapy.

“We know the reason why patients unfortunately die of their cancer is because of metastasis, and the only way to reduce the rate of metastasis is to intensify systemic therapy,” he commented.

Jeff M. Michalski, MD, MBA, vice chair and director of clinical programs, Department of Radiation Oncology, Washington University School of Medicine in St. Louis, commented at a press conference that “adoption of these shorter courses of radiation has been very slow, and they are not yet considered by many to be a standard of care in men with higher-risk disease.”

Michalski, who is also ASTRO president-elect, added: “That’s why this trial is so important,” as it shows that reducing the number of treatments is not only tolerable, “but they did not see any worsening of the cancer control outcomes.”

He explained that there also are “considerable advantages to shortening the course of radiation therapy. First of all, there are economic advantages: fewer treatments mean less cost of the treatment course,” and there are advantages regarding access “for many patients who would be concerned about 8 weeks of daily visits to the radiation therapy center.”

Michalski added: “I think the next challenge that we face is, can we do even shorter courses of radiation? And I’m happy to say that there are studies that are ongoing right now to test that hypothesis.”