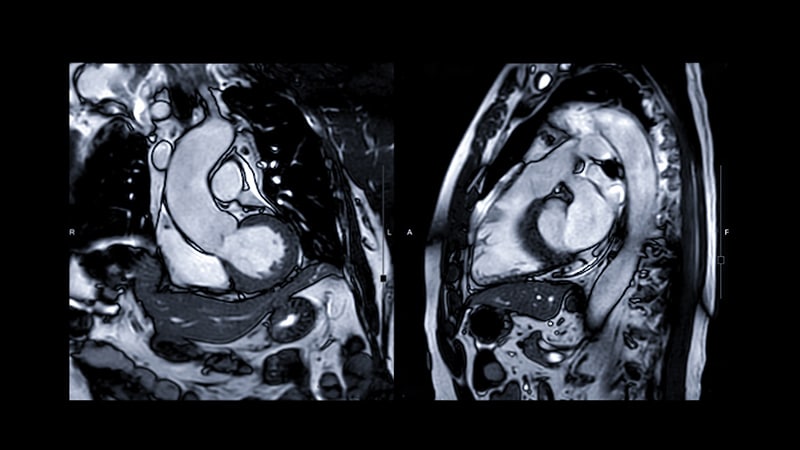 RbPET and CMR using a 3 Tesla device showed “absolutely similar performance,” in a head-to-head comparison that used fractional flow reserve assessment via invasive coronary angiography in each patient in the study as the arbiter of the true extent of coronary disease, reported Morten Bøttcher, MD, PhD, at the annual congress of the European Society of Cardiology.

This result is good news for practice because clinicians can feel free to use whichever of the two assessment methods is most feasible for each patient, said Bøttcher, a researcher at Aarhus (Denmark) University Hospital. But the study was limited by its size, and he hopes to run a future study with many more patients to try to more definitively compare RbPET and CMR.

“The Techniques Are Probably Interchangeable”

“There is a very clear result from the data: The performance of the two modalities is similar in the population studied,” commented Colin Berry, MBChB, PhD, professor of cardiology and imaging at the University of Glasgow (Scotland), and designated discussant for the report. “The techniques are probably interchangeable,” he said.

Bøttcher and his associates designed the Danish Study of Non-Invasive Diagnostic Testing in Coronary Artery Disease 2 (Dan-NICAD 2) to address a knowledge gap highlighted in the 2019 guidelines of the European Society of Cardiology for the management of patients with chronic coronary syndromes, specifically low- or intermediate-risk patients who present with symptoms of possible coronary disease who have been identified as having possibly stenotic coronary lesions using coronary CT angiography. The guidelines cite using noninvasive imaging at this point prior to invasive angiography, but note that the relative performance of the various imaging options available for this step in unknown, said Bøttcher.

The researchers enrolled 372 patients at any of four hospitals in Denmark who agreed to participate and had a positive result on a coronary CT examination performed to assess their symptoms of coronary disease. (These 372 patients came from an initial pool of people that was fourfold larger, but three-quarters had negative findings on their coronary CT examination.) Clinicians had referred all of these patients to invasive angiography with fractional flow reserve assessment, and prior to that procedure they each underwent both a RbPET and a CMR examination for the purpose of this study. The researchers used each patient’s eventual invasive angiography result as the definitive determinant of their coronary disease. These patients averaged 64 years old, and 71% were men.

He also noted that it remains unclear how to best manage patients who show no signs of ischemia when examined by RbPET or CMR, but have an apparently hemodynamically meaningful coronary lesion when assessed by invasive angiography and fractional flow reserve. “We don’t know whether we should be guided by the negative scan or by the positive FFR result,” Bøttcher said. “There is a challenge when you get different results.”

In addition, the two compared imaging methods both have logistical limitations. RbPET involved radiation exposure, and CMR performed with a 3-tesla device may not be as widely available and requires more expensive equipment.

Berry also noted that imaging methods continue to advance. For example, the CMR examinations used in the study involved qualitative assessments, but quantitative CMR is now becoming more widely available and may provide enhanced diagnostic capabilities. Berry added that patients with symptoms of coronary disease but without an identifiable coronary obstructive may have microvascular coronary disease, a disorder that he has been at the forefront of describing.

Dan-NICAD 2 received no commercial funding. Bøttcher has been an adviser to Acarix, Amgen, AstraZeneca, Bayer, and Novo Nordisk. Berry had no disclosures.

This article originally appeared on MDEdge.com.