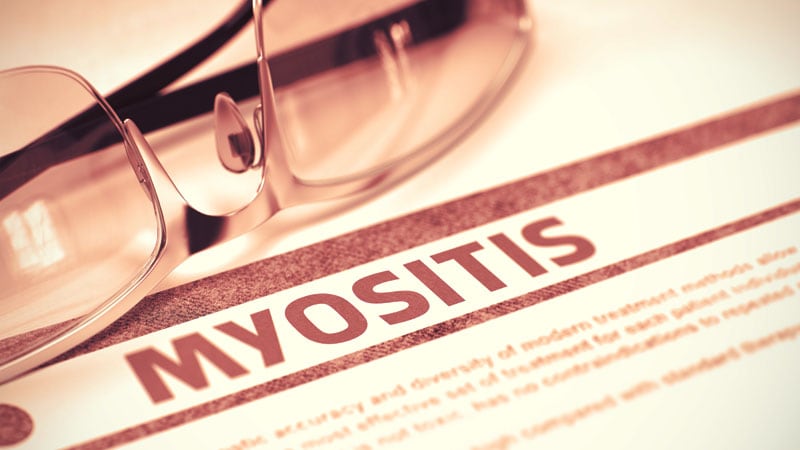 All patients with idiopathic inflammatory myopathies (IIM) should be screened for swallowing difficulties, according to the first evidence-based guideline to be produced.

The guideline, which has been developed by a working group of the British Society for Rheumatology (BSR), also advises that all diagnosed patients should have their myositis antibody levels checked and have their overall well-being assessed. Other recommendations for all patients include the use of glucocorticoids to reduce muscle inflammation and conventional synthetic disease-modifying antirheumatic drugs (csDMARDs) for long-term treatment.

It has been a long labor of love, however, taking 4 years to get the guideline published, said Chinoy, professor of rheumatology and neuromuscular disease at the University of Manchester (England), and a consultant at Salford (England) Royal Hospital.

“We’re not covering diagnosis, classification, or the investigation of suspected IIM,” said Chinoy. Inclusion body myositis also is not included.

Altogether, there are 13 recommendations that have been developed using a PICO (patient or population, intervention, comparison, outcome) format, graded based on the quality of the available evidence, and then voted on by the working group members to give a score of the strength of agreement. Chinoy noted that there was a checklist included in the Supplementary Data section of the guideline to help follow the recommendations.

“The target audience for the guideline reflects the variety of clinicians caring for patients with IIM,” Chinoy said. So that is not just pediatric and adult rheumatologists, but also neurologists, dermatologists, respiratory physicians, oncologists, gastroenterologists, cardiologists, and of course other health care professionals. This includes rheumatology and neurology nurses, psychologists, speech and language therapists, and podiatrists, as well as rheumatology specialist pharmacists, physiotherapists, and occupational therapists.

With reference to the latter, Liza McCann, MBBS, who co-led the development of the guideline, said in a statement released by the BSR that the guideline “highlights the importance of exercise, led and monitored by specialist physiotherapists and occupational therapists.”

McCann, a consultant pediatric rheumatologist at Alder Hey Hospital, Liverpool, England, and Honorary Clinical Lecturer at the University of Liverpool, added that the guidelines also cover “the need to address psychological wellbeing as an integral part of treatment, in parallel with pharmacological therapies.”

Some of the highlights of the recommendations include the use of high-dose glucocorticoids to manage skeletal muscle inflammation at the time of treatment induction, with specific guidance on the different doses to use in adults and in children. There also is guidance on the use of csDMARDs in both populations and what to use if there is refractory disease – with the strongest evidence supporting the use of intravenous immunoglobulin (IVIG) or cyclophosphamide, and possibly rituximab and abatacept.

“There is insufficient evidence to recommend JAK inhibition,” Chinoy said. The data search used to develop the guideline had a cutoff of October 2020, but even now there is only anecdotal evidence from case studies, he added.

Importantly, the guidelines recognize that childhood IIM differs from adult disease and call for children to be managed by pediatric specialists.

“Routine assessment of dysphagia should be considered in all patients,” Chinoy said, “so ask the question.” The recommendation is that a swallowing assessment should involve a speech and language therapist or gastroenterologist, and that IVIG be considered for active disease and dysphagia that is resistant to other treatments.

“Around one in four patients with myositis will develop cancer within the 3 years either before or after myositis onset,” Alexander Oldroyd, MBChB, PhD, said in a separate presentation at the BSR annual meeting.

“It’s a hugely increased risk compared to the general population, and a great worry for patients,” he added. Exactly why there is an increased risk is not known, but “there’s a big link between the biological onset of cancer and myositis.”

Oldroyd, who is an NIHR Academic Clinical Lecturer at the University of Manchester in England and a coauthor of the BSR myositis guideline, is part of a special interest group set up by the International Myositis Assessment and Clinical Studies Group (IMACS) that is in the process of developing separate guidelines for cancer screening in people newly diagnosed with IIM.

The aim was to produce evidence-based recommendations that were both “pragmatic and practical,” that could help clinicians answer patient’s questions on their risk and how best and how often to screen them, Oldroyd explained. Importantly, IMACS has endeavored to create recommendations that should be applicable across different countries and health care systems.

“We had to acknowledge that there’s not a lot of evidence base there,” Oldroyd said, noting that he and colleagues conducted a systematic literature review and meta-analysis and used a Delphi process to draft 20 recommendations. These cover identifying risk factors for cancer in people with myositis and categorizing people into low, medium, and high-risk categories. The recommendations also cover what should constitute basic and enhanced screening, and how often someone should be screened.

Moreover, the authors make recommendations on the use of imaging modalities such as PET and CT scans, as well as upper and lower gastrointestinal endoscopy and naso-endoscopy.

“It’s important – just get it out in the open, talk to people about it,” Oldroyd said.

Chinoy acknowledged he had received fees for presentations (UCB, Biogen), consultancy (Alexion, Novartis, Eli Lilly, Orphazyme, AstraZeneca), or grant support (Eli Lilly, UCB) that had been paid via his institution for the purpose of furthering myositis research. Oldroyd had no conflicts of interest to disclose.