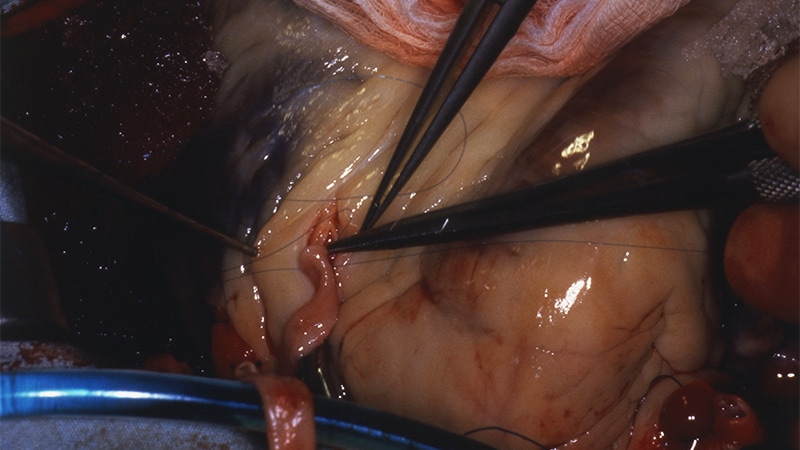 There’s a new wrinkle in the story of botulinum toxin injections intended not for cosmetic enhancement, but for suppressing postoperative atrial fibrillation (AF).

The procedure failed to show such an effect, at least based on its primary endpoint reflecting 30-day AF burden, at either of two neurotoxin dosages in a phase-2 study with a mixed cardiac surgery population. But it may have yielded novel mechanistic insights and clues to identifying specific patients that could be most likely to show a benefit.

The arrhythmia is a common cardiac surgery complication that is hard to prevent with drugs and poses substantial risk. The somewhat avant-garde intraoperative procedure calls for the neurotoxin to be injected into epicardial fat pads containing ganglion plexi that modulate cardiac autonomic activity.

Although the technique hasn’t been consistently successful, its overall trial experience has intrigued and impressed the field enough for it to explore the treatment in increasingly more instructive trials.

The current study, called NOVA, showed no significant treatment effect on post-op AF across the population of about 300 patients, who received 125 U or 250 U intraoperative injections of an investigational botulinum toxin type A (AbbVie) or sham injections.

A subgroup analysis, however, hinted that the procedure using the lower dose may significantly cut post-op AF burden at 30 days in patients age 65 or older, especially those undergoing isolated coronary bypass surgery (CABG). No such effects were seen at the higher neurotoxin dosage.

Across the entire study, actively treated patients showed milder inflammatory biomarker responses to surgery within a couple days of the procedure compared with controls.

Still, the 30-day AF risk fell 36% in the subgroup of patients 65 or older (P = .02) and by 51% (P = .01) for such patients who underwent isolated CABG rather than valvular surgery, either isolated or combined with CABG. The reductions were all at the lower 125 U dose of botulinum toxin type A; no such significant effects were seen at the higher dosage.

But it supports and extends observations from earlier studies of the neuromodulation procedure for post-op AF and may best be interpreted along with the other trials, he told theheart.org | Medscape Cardiology.

Of the prior studies, Piccini said, “those with the strongest signals of efficacy focused on bypass-only patients, and the ones that were neutral included patients with valve surgery,” consistent with the NOVA suggestion of efficacy only in isolated CABG.

“My sense is that with valve surgery, there’s probably too much inflammation and too much pro-fibrillatory influence,” he said, for the neurotoxin to effectively counter any proarrhythmic effects.

With NOVA, more is understood about the optimal botulinum toxin dosage for suppressing post-op AF, “and I think we learned that we should probably be targeting patients undergoing bypass surgery and older patients,” Piccini said in an interview.

“I think overall, the trial is very innovative and leads to new insights into a question that we’ve had for a long time: how to treat patients for postoperative atrial fib preventatively at cardiac surgery,” Elaine Y. Wan, MD, Columbia University Medical Center, New York City, observed for the theheart.org | Medscape Cardiology.

But NOVA also underscores the need to further clarify the procedure’s mechanisms of possible benefit, added Wan, who is director of electrophysiology research at her center and not associated with the current study.

The neurotoxin injections apparently lessened inflammation, she said, “but they still didn’t prevent the atrial fibrillation completely, which means there must be a mechanism going on other than inflammation.”

Indeed, inflammatory biomarker levels in the trial were reduced with the neurotoxin at both dosage levels, including the higher dosage that nonetheless didn’t cut the risk of AF, observed Usha B. Tedrow, MD, Brigham and Women’s Hospital, Boston, Massachusetts.

That “raises the question whether the AF reduction was maybe not mediated by inflammation, specifically,” proposed Tedrow, who directs her center’s clinical cardiac electrophysiology program and was the invited discussant for Piccini’s NOVA presentation.

The trial was “well-designed and well-executed,” but had a limited number of patients and events, Tedrow said, “so subgroups are appropriately interpreted with caution.”

Beyond what was presented, “it would be very interesting to know the results of heart rate variability or other autonomic assessment in the groups, to try to better elucidate the mechanism of action of the botulinum toxin on AF incidence.”

The study randomly assigned 319 patients slated for first-time open-chest cardiac surgery — CABG (64%), valve repair or replacement (24%), or both (12%) — who had left-atrial diameters 55 mm or less and were in sinus rhythm for at least 48 hours before the procedure. They averaged 67 years in age and 17% were women.

They were assigned to receive injections of botulinum toxin type A into each of five epicardial fat pads for a total dose of 125 units or 250 units — 105 and 109 patients, respectively — or, in 105 patients, fat-pad injections of a saline placebo.

No significant reduction was seen across all patients undergoing isolated CABG, but the story was different at the lower dosage in these patients who were also 65 or older.

Table. Relative Risk (RR) for Post-op AF, by Duration and Neurotoxin Dose, in Patients 65 Years or Older with Isolated CABG

In an exploratory analysis, Piccini reported, 15.7% of patients injected with placebo, 8.7% of the 125-U group, and 9.4% of those assigned to the 250 U dose were hospitalized for any cause within 30 days of the surgery.

Levels of interleukin-6 (IL-6) climbed after surgery in all three groups, peaking at postoperative day 2. But the effect was less pronounced for patients receiving either the lower (P = .001) or higher neurotoxin dose (P = .044) compared with placebo.

Similarly, postoperative levels of high-sensitivity C-reactive protein (hs-CRP) jumped in all three groups, but responses were blunted in the higher-dose group at day 2 (P = .021) and day 4 (P = .022) compared with the control group.