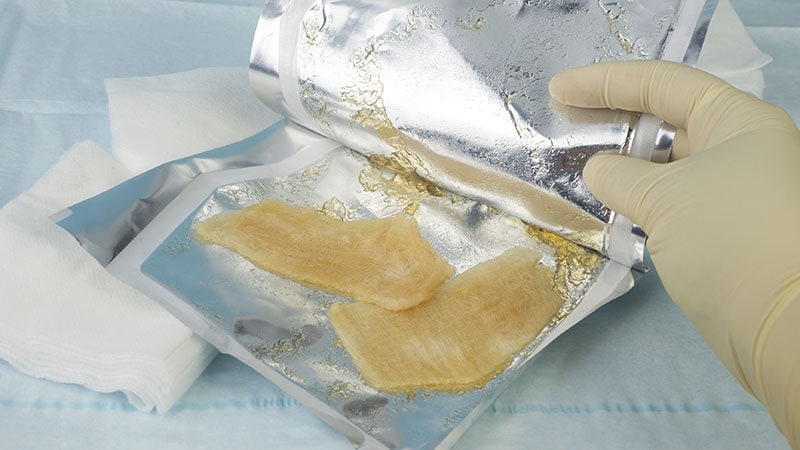 A new type of wound dressing might change burn care for the better with one amazing property: dissolvability. Surgically debriding burn wounds can be tedious for doctors and excruciating for patients. To change that, bioengineers have created a new hydrogel formula that dissolves rapidly from wound sites, melting off in 6 minutes or less.

“The removal of dressings, with the current standard of care, is very hard and time-consuming. It becomes very painful for the patient. People are screaming, or they’re given a lot of opioids,” said senior author O. Berk Usta, PhD, of the Center for Engineering in Medicine and Surgery at Massachusetts General Hospital, Boston. “Those are the things we wanted to minimize: the pain and the time.”

Although beneficial for all patients, a short, painless bandage change would be a particular boon for younger patients. At the pediatric burns care center at Shriners Hospitals for Children (an MGH partner), researchers “observe a lot of children who go through therapy or treatment after burns,” said Usta. The team at MGH collaborated with scientists at Tufts University with those patients in mind, setting out to create a new hydrogel that would transform burn wound care.

Hydrogels provide cooling relief to burn wounds and maintain a moist environment that can speed healing. There are currently hydrogel sheets and hydrogel-infused dressings, as well as gel that gets applied directly to burn wounds before being covered with protective material. These dressings must be replaced frequently to prevent infections, but that can be unbearably painful and drawn out, as dressings often stick to wounds.

“It can take up to two, three hours, and it requires multiple people working on it,” said Usta.

The new hydrogel treatment can be applied directly to a wound and it forms a protective barrier around the site in 15 seconds. The hydrogel is then covered by a protective dressing until it needs to be changed.

“After you take off the protective covering, you add another solution, which dissolves the [hydrogel] dressing, so that it can be easily removed from the burn site,” Usta said.

The solution dissolves the hydrogel in 4-6 minutes.

Many hydrogels currently used for burn wounds feature physically cross-linked molecules. This makes them strong and capable of retaining moisture, but also difficult to dissolve. The researchers used a different approach.

“This is not physical crosslinking like the traditional approaches, but rather, softer covalent bonds between the different molecules. And that’s why, when you bring in another solution, the hydrogel dissolves away,” Usta said.

The new hydrogels rely on a supramolecular assembly: a network of synthetic polymers whose connections can be reversed more easily, meaning they can be dissolved quickly. Another standout feature of the new hydrogels is their hybrid composition, displaying characteristics of both liquids and solids. The polymers are knitted together into a mesh-like network that enables water retention, with the goal of maintaining the moist environment needed for wound healing.

The supramolecular assembly is also greener, Usta explained; traditional crosslinking approaches produce a lot of toxic by-products that could harm the environment.

And whereas traditional hydrogels can require a dozen chemistry steps to produce, the new hydrogels are ready after mixing two solutions, Usta explained. This makes them easy to prepare at bedside, ideal for treating large wounds in the ER or even on battlefields.

When tested in vitro, using skin cells, and in vivo, on mice, the new hydrogels were shown to be safe to use on wounds. Additional studies on mice, as well as large animals, will focus on safety and efficacy, and may be followed by human clinical trials, said Usta.

“The next phase of the project will be to look at whether these dressings will help wound healing by creating a moist environment,” said Usta.

The researchers are also exploring how to manufacture individual pre-wrapped hydrogels that could be applied in a clinical setting — or even in people’s homes. The consumer market is “another possibility,” said Usta, particularly among patients with “smaller, more superficial burns” or patients whose large burn wounds are still healing once they leave the hospital.