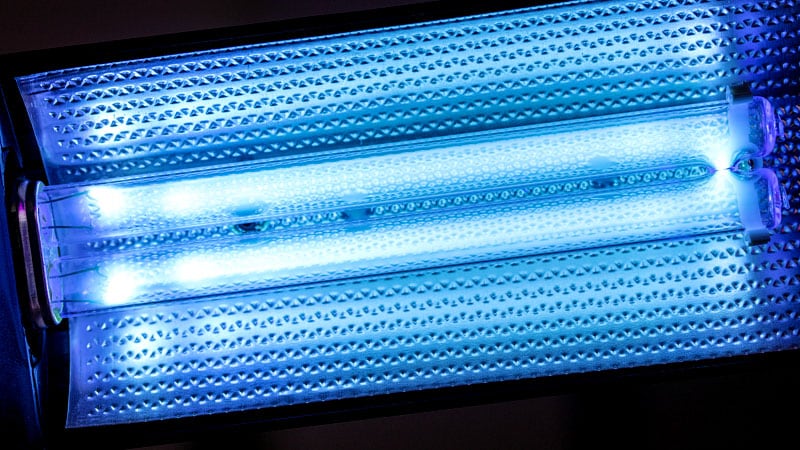 A type of ultraviolet light called far-UVC, which is safe to shine on people, could dramatically reduce the transmission of airborne germs when used indoors, according to a new study published in Scientific Reports, a journal by Nature.

In an experiment, shining the light for less than 5 minutes reduced the number of airborne microbes by more than 98%, the researchers found. The technology could become a new “hands-off” way to reduce the spread of airborne diseases such as COVID-19 and the flu, they say.

“Far-UVC rapidly reduces the amount of active microbes in the indoor air to almost zero, making indoor air essentially as safe as outdoor air,” David Brenner, PhD, one of the researchers and director of the Center for Radiological Research at Columbia University, said in a statement.

“Using this technology in locations where people gather together indoors could prevent the next potential pandemic,” he said.

Scientists have known for decades that a type of ultraviolet light called UVC can kill microbes, including bacteria and viruses. But conventional germ-killing UVC light can’t be used in indoor spaces when people are present because it could harm the eyes and skin, potentially causing sunburn and skin cancer. UVC has mostly been limited to sterilizing medical equipment.

Far-UVC light, on the other hand, has a shorter wavelength and doesn’t penetrate human skin cells or eye cells. During the past decade, multiple studies across the world have found that far-UVC can destroy airborne germs without causing damage to living tissue.

In a study published in February, Brenner’s lab found that far-UVC light didn’t cause damage in a 3D model of human skin. In another study, they found no signs of skin damage in hairless mice that were exposed to the light for 8 hours a day over 15 months.

During the experiment, a sprayer continuously spewed an aerosol mist of Staphylococcus aureus, a bacteria that causes a variety of medical issues and can be involved in dangerous drug-resistant cases. The research team chose the microbe because it is less sensitive to far-UVC light than coronaviruses. After the microbes reached a certain concentration in the room, they turned on the lamps.

The lamps killed more than 98% of the airborne microbes in 5 minutes. The research team found that even as more microbes were sprayed into the room, the far-UVC lamps keep the level of microbes low.

The research team also noted the potential limits to using far-UVC in the real world, such as ensuring that lamps are installed properly and that the light has the right amount of radiation to be effective and safe for people. If a safe balance can be achieved, the technology could be a game-changer for reducing virus transmission, the researchers said.

Previous studies have shown that far-UVC light can kill the virus that causes COVID-19, other human coronaviruses, the flu, and drug-resistant bacteria, Brenner said. Due to the way the light kills microbes, viruses and bacteria can’t develop resistance as they do with vaccines and drug treatments.

“What’s particularly attractive about far-UVC technology as a practical method of preventing indoor disease transmission is that it will be equally good at inactivating all future COVID variants,” he said, “as well as new infectious viruses that have yet to emerge, while retaining efficacy against ‘old-fashioned’ viruses like influenza and measles.”

The study was supported by a grant from the U.K. Health Security Agency. Brenner and co-inventors have been granted a U.S. patent for the technology, and Columbia University has licensed parts of filtered UV light technology to USHIO Inc. and received a research gift from LumenLabs, a company producing far-UVC sources.

Photochemistry and Photobiology: “Wavelength-dependent DNA Photodamage in a 3-D human Skin Model over the Far-UVC and Germicidal UVC Wavelength Ranges from 215 to 255 nm.”