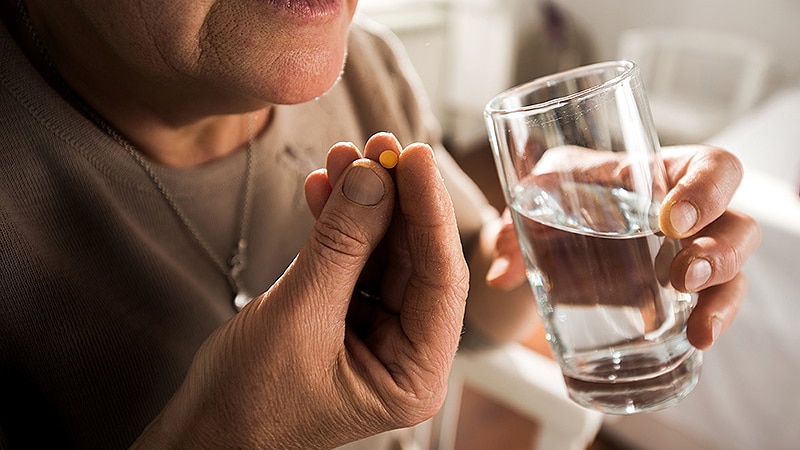 NATIONAL HARBOR, Maryland — The first randomized trial to examine whether older adults with multiple sclerosis (MS) can safely discontinue disease-modifying therapy (DMT) after years of being relapse-free failed to deliver a definitive conclusion.

Results from the DISCOMS trial, which included more than 200 participants, showed discontinuation of DMTs failed to achieve noninferiority vs drug continuation.

“While we did not get a perfect answer either way, this is perhaps the most likely outcome we might have expected — a possible small amount of excess new MRI activity primarily, but of unclear clinical significance,” study co-investigator John R. Corboy, MD, professor of neurology at the University of Colorado School of Medicine and director at the Rocky Mountain MS Center at the University of Colorado in Aurora, told Medscape Medical News.

After an average follow-up of about 2 years, older study participants who discontinued DMT after years of having no relapses showed some small increases in disease activity vs patients who continued treatment. However, with no significant differences in increased disability, he added.

The late-breaking results were presented at the Consortium of Multiple Sclerosis Centers (CMSC) 2022 Annual Meeting.

The DISCOMS study was a noninferiority trial conducted at 20 US centers and included 259 patients with MS who were enrolled between May 2017 and January 2021.

Participants had a mean age of 63 years at baseline, no significant differences in characteristics, and were randomly assigned to either discontinue (n = 131) or continue (n = 128) their current drug therapy regimen.

Study criteria at baseline included no changes in patient brain lesions on MRI for at least 3 years and no relapses for at least 5 years.

Average time from last relapse for the participants was 13.9 years and average level of disability was moderate, with a score of 3.4 on the 10-point Expanded Disability Status Scale (EDSS).

The primary outcome was the development of new brain lesions or worsening of the EDSS. At an average follow-up time of about 2 years, approximately 5% of the group who continued medication vs 13% of the discontinuation group had new disease activity.

Total number of disease activity events among those who continued and discontinued DMTs were 6 and 16, respectively. In the combined groups, 15 of these events involved one or two new brain lesions, but no clinical relapse.

Of note, 28 of the 30 patients who did have disability progression did not show any new lesions, according to scan activity, or have relapses.

There were no significant differences in overall quality of life, symptoms related to MS, and/or cognitive scores on the symbol digit modalities test. There were also no differences in adverse events (AEs) between the groups.

“The main conclusions are that while we could not show discontinuation to be noninferior to continuation in these patients using this primary outcome measure, there were very few [overall] clinical events,” including relapse, scan change, or disability progression, said Corboy.

“The significance of one or two new brain lesions over almost 2 years of follow-up is not really known, but [the lesions] were not associated with disability progression in this study,” he said.

The issue of MS medication discontinuation as patients age is pressing, yet data on the issue is sorely lacking, said Corboy.

Most pivotal phase 3 trials on DMTs have excluded individuals over age 55 years. However, results from modeling studies not only suggest DMTs may become less effective as patients age, but the prevalence of AEs also increases, the researchers noted in a viewpoint published last year in JAMA Neurology.

“An important question that remains to be answered is when do the risks of the DMT start to outweigh the benefits?” they write. “Also, does the efficacy of therapy still justify the financial burden of decades-long or indefinite prescription of expensive DMTs?”

The investigators called for clinical trials to allow patients to make more informed decisions. In addition to DISCOMS, other trials taking on these issues include STOP-I-SEP and DOT-MS.

“We strongly believe that it is now time to, as a field, focus more on individualized treatment strategies, especially on how to better predict which patients need therapy and which patients do not, at both the beginning of the disease and in older patients who have been treated for a long time,” they write.

“The bottom line is, it was unfortunately a negative study,” said Coyle, who was not involved with the research.

“These were older individuals who had not shown any clinical activity over several years, so the question was: Since they’d been quiescent for so long, could you remove them from their DMT? But the results were disappointing,” she added.

Coyle said she would have liked for the findings to have shown that one option was not inferior to the other, “and have that documented in a randomized trial.”

She noted the challenges of discontinuation further underscore the importance of identifying biomarkers in the blood that may foreshadow disease progression.

“This is why biomarkers such as serum neurofilament light chain may be helpful. If they can predict a higher risk of a potential for increased activity before there are symptoms, that could help guide these decisions,” Coyle said.