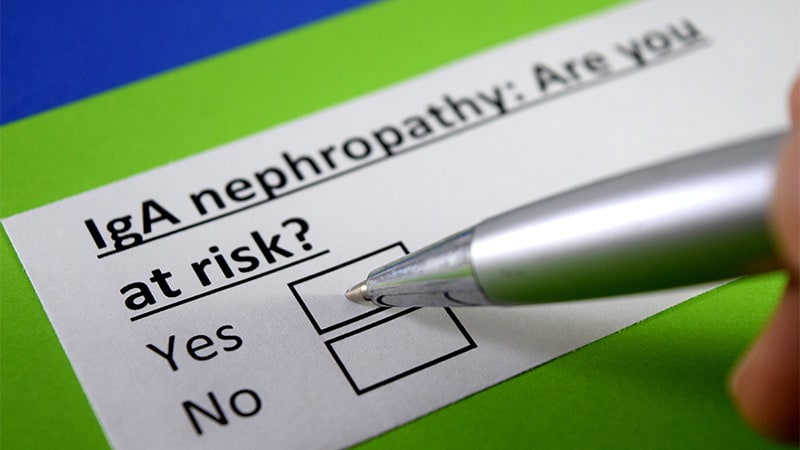 Patients with immunoglobulin A (IgA) nephropathy showed clinically meaningful improvements in several measures of renal function after 9 months of treatment with a delayed-release formulation of the oral glucocorticoid budesonide, Nefecon, in a pivotal trial.

The newly published findings “support Nefecon as the first disease-modifying therapy approved for patients with primary IgA nephropathy at risk of end-stage kidney disease,” write Jonathan Barratt, MD, professor of renal medicine at the University of Leicester, UK, and co-authors in a recent report, which details part A of the NefIgArd trial, published in Kidney International.

Based largely on these results, Nefecon received marketing approval as Tarpeyo from the US Food and Drug Administration in December 2021 for the indication of reducing proteinuria in patients with primary IgA nephropathy at risk for rapid disease progression.

The FDA gave this formulation of delayed-release budesonide an orphan-drug designation, as well as accelerated approval, which the agency says, “enables FDA to approve drugs for serious conditions to fill an unmet medical need based on a result that is reasonably likely to predict a clinical benefit to patients.”

The FDA’s marketing approval came with the caveat that “further clinical trials are required to verify and describe Tarpeyo’s clinical benefit,” the agency said.

The results showed that patients who received delayed-release budesonide had a 27% reduction in UPCR compared with the placebo group, a significant difference for the primary endpoint. All secondary endpoints also showed significant benefits in favor of active treatment.

The authors also concluded that treatment was “well-tolerated” and most treatment-emergent adverse effects were reversible and mild or moderate in severity; 1% of adverse events were severe. The delayed-release formulation of the oral steroid targets the small intestine, reducing potential adverse effects.

The 9-month results from the NefIgArd trial represent the first of two prespecified phases, with a follow-up, fully blinded observational phase intended to verify the clinical benefit of delayed-release budesonide on long-term kidney function by assessing an eGFR-based endpoint calculated over 2 years with an additional 12 months of follow-up.

According to the new report, all 360 patients required for the second-phase analysis have been enrolled, with final results expected in 2023.

The authors say they expect the early benefits of UPCR levels seen during the first phase will “likely translate into a slower eGFR decline over time,” the endpoint that they will fully assess in the second phase, which could lead to full FDA approval of the agent for this additional indication.

The NefIgArd trial was sponsored by Calliditas, the company that markets delayed-release budesonide (Tarpeyo). Barratt has reported being a consultant for Calliditas and has received research grants and personal fees from Calliditas. Several of the co-authors have reported financial relationships with Calliditas.