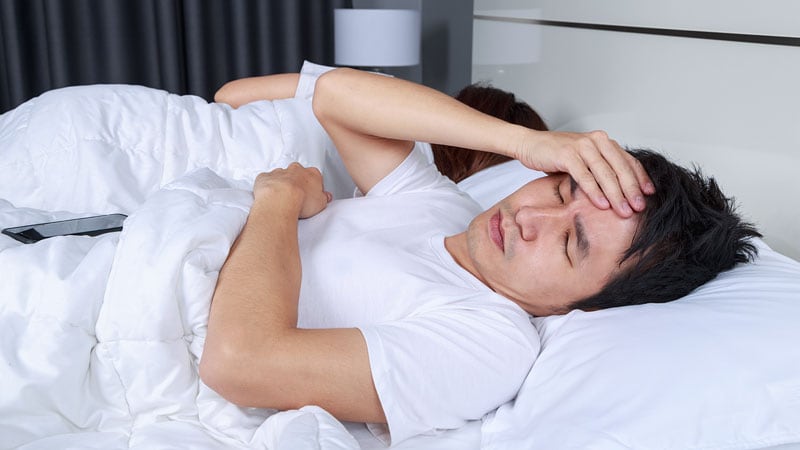 Sleep behaviors, both individually and combined, are associated with an increased risk of developing metabolic-dysfunction associated fatty liver disease (MAFLD), shows a Chinese analysis that suggests the effect may be independent of obesity.

Yan Liu, PhD, from the School of Public Health at Sun Yat-sen University in Guangzhou, China, and colleagues studied data on over 5000 individuals who self-reported sleep behaviors and underwent liver ultrasound.

In contrast, having any of six healthy sleep behaviors decreased the risk by 16% each, and even a “moderate improvement in sleep quality was related to a 29% reduction in the risk for fatty liver disease,” he added.

The research, published online July 28 in the Journal of Clinical Endocrinology & Metabolism, also indicated that obesity accounted for only one fifth of the effect of sleep quality on MAFLD risk.

Rise in Unhealthy Lifestyles Leads to Increase in MAFLD

The authors write that MAFLD is the “leading chronic liver disease worldwide,” affecting around a quarter of the adult population, and may lead to end-stage liver diseases and extra-hepatic complications, thus “posing a major health and economic burden.”

Moreover, the disease prevalence is “soaring at an unanticipated rate,” increasing from 18% to 29% in China over the past decade, due to a “rapid rise in unhealthy lifestyles,” the authors note.

Sleep disturbance is increasingly prevalent, “and an emerging contributor to multiple metabolic disorders,” with insomnia and habitual snoring, for example, positively correlated with hypertension, impaired glucose metabolism, and dyslipidemia, report the authors.

However, whether sleep quality, which includes “several metabolic-related sleep behaviors,” constitutes an independent risk for MAFLD “over and above” the effect of obesity remains unclear.

To investigate further, the researchers examined data from the baseline survey of the community-based, prospective South China Cohort study, which was conducted in four regions of Southern China and involved 5430 individuals aged 30-79 years.

Between March 2018 and October 2019, the participants self-reported sleep behaviors on the Pittsburgh Sleep Quality Index questionnaire and underwent ultrasound examination of the liver.

MAFLD was diagnosed in those with hepatic steatosis and one of the following:

After excluding patients with insufficient data, and those with a history of liver cirrhosis, hepatectomy, or liver cancer, among others, the team included 5011 individuals with an average age of 64 years, and a mean body mass index of 24.31 kg/m2. Forty percent were male.

Obesity was present in 13% of participants, whereas 15% had diabetes, 58% hypertension, and 35% metabolic syndrome.

MAFLD was diagnosed in 28% of the study population. They were older, more likely to be female with a higher education, and had a higher prevalence of preexisting metabolic disorders, and worse metabolic profiles, than those without the disease.

Turning to the associations between sleep and the risk of MAFLD, the researchers say that “in contrast to previous reports, neither shorter nor longer sleep duration was found to be associated with the risk for MAFLD.”

However, after adjusting for demographics, lifestyles, medication and preexisting metabolic comorbidities including hypertension, diabetes and obesity, they found that the risk of MAFLD was significantly associated with late bedtime (defined as after 10 PM), at an odds ratio of 1.37 (P < .05).

When the team compared low-risk and high-risk sleep factors, they found that participants who had an early bedtime, slept 7-8 hours per night, never or rarely had insomnia or snoring, had infrequent daytime sleepiness, and daytime napping of half-hour or less had an odds ratio for MAFLD vs other participants of 0.64 (P < .05).

Further analysis indicated that individuals with a sedentary lifestyle and central obesity had a higher risk of MAFLD, but that the presence of obesity accounted for only 20.8% of the total effect of sleep quality on the risk of MAFLD.

“Taken together, our results suggests that obesity only partially mediates the effect of overall sleep quality on MAFLD,” the authors write.

“Given that large proportions of subjects suffering from poor sleep quality are underdiagnosed and undertreated, our study calls for more research into this field and strategies to improve sleep quality,” Liu said.

The study was supported by the “National Key R&D Program” of China, the Fundamental Research Funds for the Central Universities (Sun Yat-sen University), Natural Science Foundation of Guangdong Province, the Key Project of Medicine Discipline of Guangzhou, and Basic Research Project of Key Laboratory of Guangzhou.