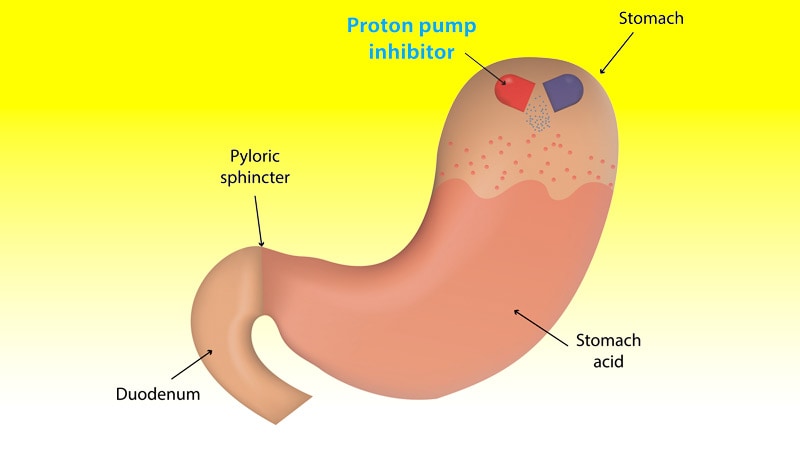 Patients on PPIs had an 18% reduction in all-cause mortality vs other patients if they had gastrointestinal bleeding. But in those without bleeding, PPIs were associated with a 23% increase in liver-related mortality.

“My take-away from this study is that there should be a nuanced understanding of PPIs and cirrhosis,” corresponding author Nadim Mahmud, MD, MS, Perelman School of Medicine, University of Pennsylvania, Philadelphia, PA, told Medscape Medical News, adding that, if they are to be used in this setting, there should be “a very compelling indication.”

Based on the new analysis, Mahmud explained, in a patient with cirrhosis hospitalized with a potentially ulcer-related upper gastrointestinal bleed, “we shouldn’t be afraid” to use PPIs “out of fear of potential infection or decompensation because our data demonstrate pretty strongly that that sort of patient may have a mortality benefit.”

In contrast, patients with cirrhosis and “vague abdominal discomfort” are often started on a PPI “just to see if that helps,” Mahmud said, and they may stay on the medication “in perpetuity, just because they’re so ubiquitously prescribed.”

“In that patient, we should recognize that there is a potential risk of increased infection and decompensation,” he said. There “should be an active effort to deprescribe the PPI or at the very least reduce it to the minimum dose needed for efficacy, if it’s treating a symptom.”

The research was published online April 6 in the journal Gastroenterology.

Looking at the Big Picture of PPIs in People With Cirrhosis

The authors note that the half-life of PPIs is “prolonged in patients with cirrhosis” and that alterations in the gastrointestinal microbiota as a result of gastric acid suppression “may allow for bacterial overgrowth and translocation,” thus increasing the risk for infections.

However, studies of the impact of PPIs on adverse outcomes in patients with cirrhosis have often been hampered by numerous limitations, such as small sample sizes, a “limited ability to control for complex confounding,” or a “narrow focus” on hospitalized patients.

To overcome these problems, the team retrospectively examined data from the Veterans Outcomes and Costs Associated with Liver Diseases (VOCAL) cohort, including all adults with incident cirrhosis between January 2008 and June 2021.

They excluded patients with Fib-4 scores <1.45 at baseline, as well as those with prior liver transplantation, decompensated cirrhosis at baseline, a diagnosis of hepatocellular carcinoma within 6 months of the index date, and less than 6 months of follow-up.

Over 49 months of follow-up, all-cause mortality was recorded for 37.5% of patients, of whom 59% experienced non–liver-related death and 41% liver-related mortality.

The authors suggest that these increased risks “may mediate the observed increased in liver-related mortality.”

“Although this is a retrospective study, it is very large so we should give credit to the associations,” she told Medscape Medical News. She was not involved with the current study.

“The most important message is that we need to be judicious with our therapy,” Reau added, qualifying that “everything is a risk–benefit ratio.”

“PPI use in cirrhosis has a role but should not overstep its boundary,” she explained. “More simply, if the PPI is indicated, you should not avoid it in a patient with cirrhosis. On the other hand, if you have a patient with advanced liver disease who is chronically taking a PPI, you should question its indication.

Paul Martin, MD, chief of the Division of Hepatology, University of Miami Health Systems, Miami, Florida, told Medscape Medical News that when it comes to PPI use in patients with cirrhosis, “judicious is the right word. They should be clearly used if there’s a bona fide indication…and probably for a finite period of time.”

In a common scenario, “a patient is put on a PPI after they’ve undergone endoscopy with obliteration of varices, and the thought is that PPIs help the ulcers induced by the banding to heal,” said Martin, who was not associated with the research. “This paper didn’t specifically tease out whether that’s beneficial or not, but it certainly suggests, in patients with a history of gastrointestinal bleeding, that PPIs are still beneficial.”