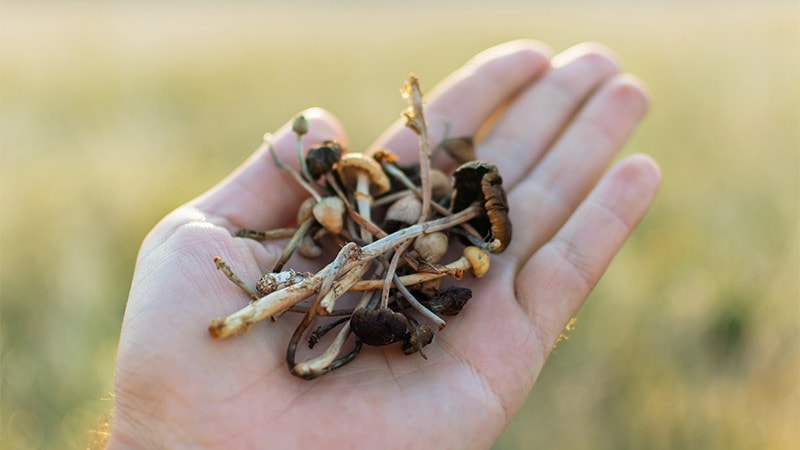 Psilocybin paired with psychotherapy is associated with a robust and sustained decrease in drinking among adults with alcohol use disorder (AUD), new research suggests.

Results from the first randomized, placebo-controlled trial of psilocybin for alcohol dependence showed that during the 8 months after first treatment dose, participants who received psilocybin had less than half as many heavy drinking days as their counterparts who received placebo.

The effects observed with psilocybin were “considerably larger” than those of currently approved treatments for AUD, senior investigator Michael Bogenschutz, MD, psychiatrist and director of the NYU Langone Center for Psychedelic Medicine, New York City, said during today’s press briefing.

If the findings hold up in future trials, psilocybin will be a “real breakthrough” in the treatment of the condition, Bogenschutz said.

The findings were published online August 24 in JAMA Psychiatry.

The study included 93 adults (mean age, 46 years) with alcohol dependence who consumed an average of seven drinks on the days they drank and had had at least four heavy drinking days during the month prior to treatment.

The participants also received 12 psychotherapy sessions over a 12-week period. All were assessed at intervals from the beginning of the study until 32 weeks after the first medication session.

During the last month of follow-up, which was 7 months after the final dose of study medication, 48% of the psilocybin group were entirely abstinent, vs 24% of the placebo group.

“It is remarkable that the effects of psilocybin treatment persisted for 7 months after people received the last dose of medication. This suggests that psilocybin is treating the underlying disorder of alcohol addiction rather than merely treating symptoms,” Bogenschutz noted.

Total alcohol consumption and problems related to alcohol use were also significantly less in the psilocybin group.

Adverse events related to psilocybin were mostly mild, self-limiting, and consistent with other recent trials that evaluated the drug’s effects in various conditions.

However, the current investigators note that they implemented measures to ensure safety, including careful medical and psychiatric screening, therapy, and monitoring that was provided by well-trained therapists, including a licensed psychiatrist. In addition, medications were available to treat acute psychiatric reactions.

A cited limitation of the study was that blinding was not maintained because the average intensity of experience with psilocybin was high, whereas it was low with diphenhydramine.

This difference undermined the masking of treatment such that more than 90% of participants and therapists correctly guessed the treatment assignment.

Another limitation was that objective measures to validate self-reported drinking outcomes were available for only 54% of study participants.

Despite these limitations, the study builds on earlier work by the NYU team that showed that two doses of psilocybin taken over a period of 8 weeks significantly reduced alcohol use and cravings in patients with AUD, as reported by Medscape Medical News.

“We’re very encouraged by these findings and hopeful about where they could lead. Personally, it’s been very meaningful and rewarding for me to do this work and inspiring to witness the remarkable recoveries that some of our participants have experienced,” Bogenschutz told briefing attendees.

The authors of an accompanying editorial note that novel medications for alcohol dependence are “sorely needed. Recent renewed interest in the potential of hallucinogens for treating psychiatric disorders, including AUD, represents a potential move in that direction.”

Henry Kranzler, MD, and Emily Hartwell, PhD, both with the Center for Studies of Addiction, University of Pennsylvania Perelman School of Medicine, Philadelphia, write that the new findings “underscore the potential of developing psilocybin as an addition to the alcohol treatment pharmacopeia.”

They question, however, the feasibility of using hallucinogens in routine clinical practice because intensive psychotherapy, such as that provided in this study, requires a significant investment of time and labor.

“Such concomitant therapy, if necessary to realize the therapeutic benefits of psilocybin for treating AUD, could limit its uptake by clinicians,” Kranzler and Hartwell write.

The study was funded by the Heffter Research Institute and by individual donations from Carey and Claudia Turnbull, Dr Efrem Nulman, Rodrigo Niño, and Cody Swift. Bogenschutz reports having received research funds from and serving as a consultant to Mind Medicine, the Multidisciplinary Association for Psychedelic Studies, B. More, AJNA Labs, Beckley Psytech, Journey Colab, and Bright Minds Biosciences. Kranzler and Hartwell have reported no relevant financial relationships.