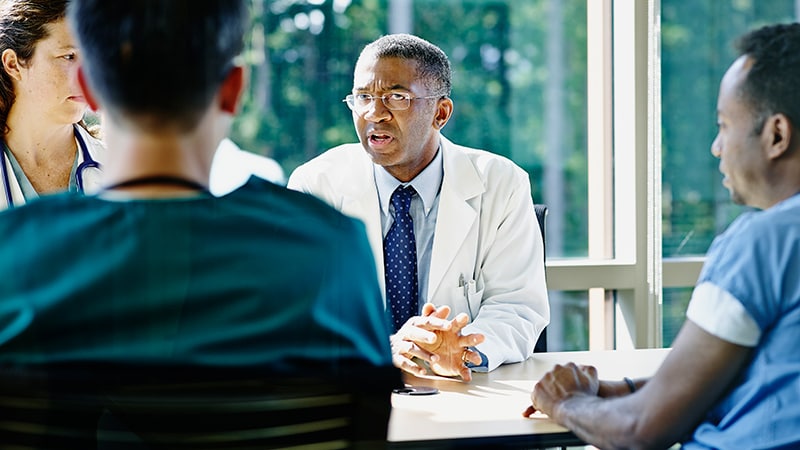 NASHVILLE, Tenn. — If a pulmonologist becomes involved early in the care of patients admitted to the hospital for an acute exacerbation of chronic obstructive pulmonary disease (AECOPD), the rate of readmission is reduced substantially relative to no pulmonologist involvement, according to a retrospective cohort review presented at the American College of Chest Physicians (CHEST) annual meeting.

“When stratified by severity of COPD at the time of admission, the difference in the readmission rate was even greater,” reported Nakisa Hekmat-Joo, MD, a third-year resident at Staten Island University Hospital, New York City.

Just as protocols for have been developed for prompt initiation of antibiotics in patients with septicemia or prompt revascularization in patients with ST-segment elevated myocardial infarction (STEMI), Hekmat-Joo said the data from this study warrant a larger trial to evaluate whether an AECOPD admission protocol is warranted to improve outcomes and lower costs.

In this study, all AECOPD admissions were included from a recent 2-year period at two Staten Island hospitals. Of these, 198 patients received a pulmonologist consult within 24 hours. The remaining 92 patients were not evaluated by pulmonologists but were admitted and then managed by residents, internists, or others.

At admission, there was no significant difference between those receiving a pulmonologist consult and those who did not. The average O2 saturation was lower in the group seen by a pulmonologist (93% vs. 95.4%; P < .0001), but the most striking difference was the low relative readmission rate, which remained significant after controlling for severity and pulmonary function.

“We speculate that pulmonologists were more likely than internists to treat beyond standard guidelines, particularly in the event of greater severity,” Hekmat-Joo explained. These steps might include earlier use of non-invasive positive pressure ventilation or earlier initiation of rehabilitation strategies.

There were several signals that a pulmonologist consult led to more rigorous care.

Based on these results, Hekmat-Joo and her co-investigators are now working on a protocol for COPD admissions that involves a pulmonologist consult within 24 hours of admission. She hopes to test this protocol in a prospective trial.

“COPD remains a major cause of death and consumes enormous healthcare resources. About 30% of the cost of COPD care is due to readmissions,” she said, noting that readmissions adversely impact quality of life.

Asked if there was sufficient staff at her institution to allow for a pulmonologist consult with every COPD admission, Hekmat-Joo acknowledged that this has to be demonstrated, but compelling evidence of a benefit might prompt a redistribution of resources.

“If we can show that readmissions are substantially reduced, adding staff to perform these consults would be a good investment,” said Hekmat-Joo, indicating that improved outcomes could also attract the attention of third-party payers and those tracking quality-of-care metrics.

There is a strong rationale for a randomized prospective trial to confirm the value of a pulmonologist consultation following admission for an acute exacerbation of COPD, according to Nicola A. Hanania, MD, director, Airways Clinical Research Center, Baylor College of Medicine, Houston, Texas.

The potential for benefit as seen in this retrospective study is a rational expectation and might be related to more appropriate therapy upon discharge as well as to earlier and more rigorous follow-up, according to Hanania. Although he cautioned that there is a meaningful risk of selection bias in a retrospective study, he thinks this study “is certainly probing an important issue.”

“Mortality from a hospitalized COPD exacerbation exceeds that of a myocardial infarction,” Hanania pointed out. Noting that all patients with an MI are evaluate by a cardiologist, he sees the logic of a pulmonologist consult — although he acknowledged that evidence is needed.

“I strongly believe that a prospective study is feasible and will answer the question in an unbiased manner if done properly,” he said in an interview. If a multicenter, well-controlled study was positive, it could change practice.

In the event of a study showing major clinical benefits, particularly a reduction in mortality, “I believe it is feasible to have a pulmonary consult to see every COPD exacerbation patient admitted to the hospital,” Hanania said.