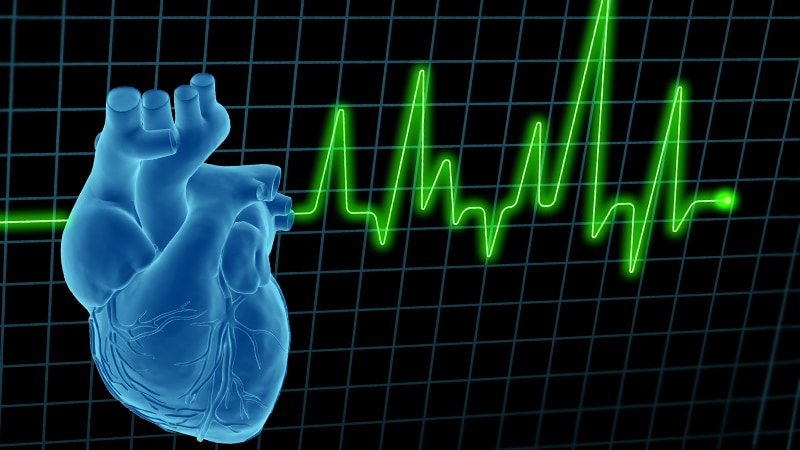 In the first transplant of a genetically altered pig heart into a human in January, initial unexpected, prolonged ECG readings apparently did not affect the heart’s function, although the organ suddenly began to fail at day 50.

A study of these ECG changes, scheduled for presentation by Calvin Kagan, MD, and colleagues at the American Heart Association (AHA) 2022 Scientific Sessions, offers insight into this novel operation.

As widely reported, the patient, 57-year-old David Bennett of Maryland, had end-stage heart disease and was a poor candidate for a ventricular assist device and ineligible for a human heart, when he consented to be the first human to be transplanted with a pig heart that had a number of genes added or subtracted with the goal, in part, to prevent rejection.

The heart initially performed well after it was transplanted in an operation at the University of Maryland School of Medicine (UMSOM) in Baltimore on January 7, but failed in the second month and Bennett passed away on March 9.

The US Food and Drug Administration (FDA) had granted emergency authorization for the surgery through its expanded access (compassionate use) program, co-author Muhammad Mohiuddin, MD, told theheart.org | Medscape Cardiology in an interview.

“We have learned a lot and hope we can do more,” said Mohiuddin, scientific and program director of the Cardiac Xenotransplantation program at UMSOM.

“Suddenly on day 50, the heart started to get thicker and was not relaxing enough,” explained senior author Timm Dickfeld, MD, PhD, director of electrophysiology research at UMSOM. A biopsy revealed substantial buildup of interstitial fluid that restricted movement. The fluid was replaced by fibrous tissue, leading to irreversible damage.

The patient had daily 12-lead ECGs after the transplant.

However, in the transplanted xenograft heart, the initial ECG readings showed a longer PR interval of 190 ms, QRS duration of 138 ms, and QT of 538 ms.

“In a human heart, when those parameters get longer, this can indicate signs of electrical or myocardial disease,” Dickfeld explained in a press release from the AHA.

“The QRS duration may prolong when, for example, the muscle and the electrical system itself is diseased, and that is why it takes a long time for electricity to travel from cell to cell and travel from one side of the heart to the other,” he said.

“In the human heart, the QT duration is correlated with an increased risk of abnormal heart rhythms,” he noted. “In our patient, it was concerning that the QT measure was prolonged. While we saw some fluctuations, the QT measure remained prolonged during the whole 61 days.”

Two experts who were not involved with this research weighed in on the findings for theheart.org | Medscape Cardiology.

“This very interesting study reinforces the difficulties in xenotransplantation, and the need for more research to be able to safely monitor recipients, as baseline values are unknown,” said Edward Vigmond, PhD.

Vigmond, from the Electrophysiology and Heart Modeling Institute (LIRYC) at the University of Bordeaux in France, published a related study about a model of translation of pig to human electrophysiology.

The ECG is sensitive to the electrical activation pattern of the heart, along with the cellular and tissue electrical properties, he noted.

“Although pigs and humans may be similar in size, there are many differences between them,” Vigmond observed, including “the extent of the rapid conduction system of the heart, the number of nuclei in the muscle cells, the proteins in the cell membrane which control electrical activity, the orientation of the heart and thorax, and the handling of calcium inside the cell.”

“On top of this,” he continued, “donor hearts are denervated, so they no longer respond to nervous modulation, and circulating compounds in the blood which affect heart function vary between species.”

“With all these differences, it is not surprising that the ECG of a pig heart transplanted into a human resembles neither that of a human nor that of a pig,” Vigmond said.

“It is interesting to note that the humanized-gene-edited porcine heart exhibited abnormal electrical conduction parameters from the outset,” Mandeep R. Mehra, MD, commented.

“Whether these changes were due to the gene modifications (ie, already inherent in the pig ECG prior to transplant) or a result of the transplant operation challenges (such as the ischemia reperfusion injury and early immunological interactions) is uncertain and should be clarified,” said Mehra, from Harvard Medical School and Brigham and Women’s Medicine in Boston.

“Knowledge of these changes is important to determine whether a simple ECG parameter may be useful to identify changes that could indicate developing pathology,” Mehra added.

“In the older days of human transplantation, we often used ECG parameters such as a change in voltage amplitude to identify signals for rejection,” he continued. “Whether such changes occurred in this case could be another interesting aspect to explore as changes occurred in cardiac performance in response to the physiological and pathological challenges that were encountered in this sentinel case.”

The study authors report having no outside sources of funding.