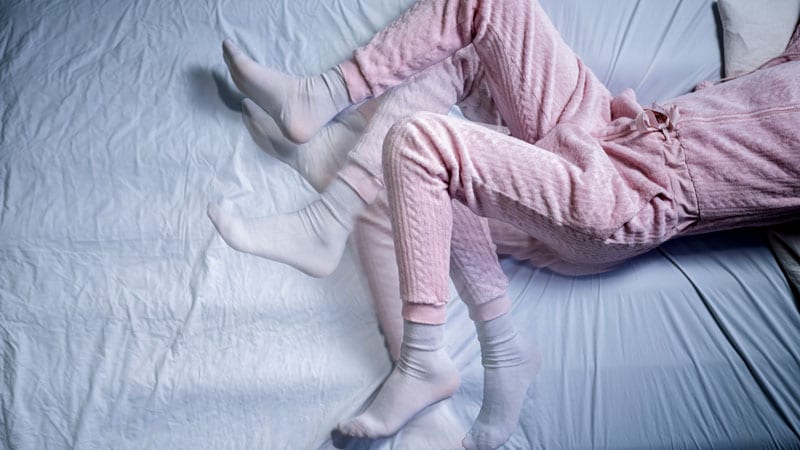 Individuals with restless legs syndrome showed an increase in symptom severity in the early phase of the COVID-19 pandemic in the United States in 2020, but this increase had waned by 2021, according to data from 500 participants in the National Restless Legs Syndrome Opioid Registry.

“Considering the link between RLS and psychiatric illness, it has been speculated that there may have been increases in RLS symptom severity alongside the recent rise in depression and anxiety,” but this association has not been explored, they said.

In a study published in Sleep Medicine, the researchers reviewed data from 500 adult participants in the National RLS Opioid Registry, a longitudinal observational study. Participants reported RLS symptom severity before and during the COVID-19 pandemic at 6-month intervals. Survey responses were collected from the early phase of the pandemic in the United States in January/February 2020, then in April/May 2020, and then 6 months later, from September 2020 through February 2021, and also 1 year later, in March 2021 through June 2021.

In a between-subjects analysis for these time periods, symptom scores on the IRLS were significantly higher in January/February 2020; participants were approximately twice as likely to have IRLS scores of 20 or higher compared to April/May 2020 (37.7% vs. 20.9%).

The researchers also compared responses by the same participants at baseline and 6 months later, from September 2020 through February 2021, and 1 year later, from March 2021 through June 2021. In this within-subjects analysis, 51.3% of the participants had increased IRLS scores in spring 2020. Participants were significantly more likely to have IRLS scores of 20 or above in the early COVID-19 period in April and May 2020 compared with baseline (37.7% vs. 26.6%). Both PHQ-9 and GAD-7 scores were higher during early COVID-19 in April and May 2020 than at baseline.

“Changes in IRLS were also significantly correlated with changes in both PHQ-9 and GAD-7 scores, providing further support for the associations of RLS to both depression and anxiety,” the researchers wrote. “Notably, individuals who completed surveys in January and February 2020 did not see increases in RLS severity or other mental health questionnaire values on subsequent six-month surveys completed during the pandemic or on the following iteration of surveys 1 year later. We suspect that these findings may be at least partially related to the timing of the surveys,” the researchers said.

Six-month survey data for most patients were collected during a decline in cases and hospitalizations, and 1-year data in early 2021 may have reflected optimism with the availability of vaccines, they said.

The study findings were limited by several factors including the observational design, which prevented conclusions about causality, and the lack of data on the effect of COVID-19 infection on RLS symptoms, which should be investigated in future studies, the researchers said.

However, the results are the first evidence of increased RLS symptom severity during the COVID-19 pandemic, and elevated scores were associated with sleep disturbance, depression, and anxiety, they wrote. “These data suggest that clinicians should attend to RLS symptoms during the current pandemic and in future instances of socioeconomic and/or political uncertainty. Future studies need to confirm these findings in other populations of patients with RLS,” they concluded.