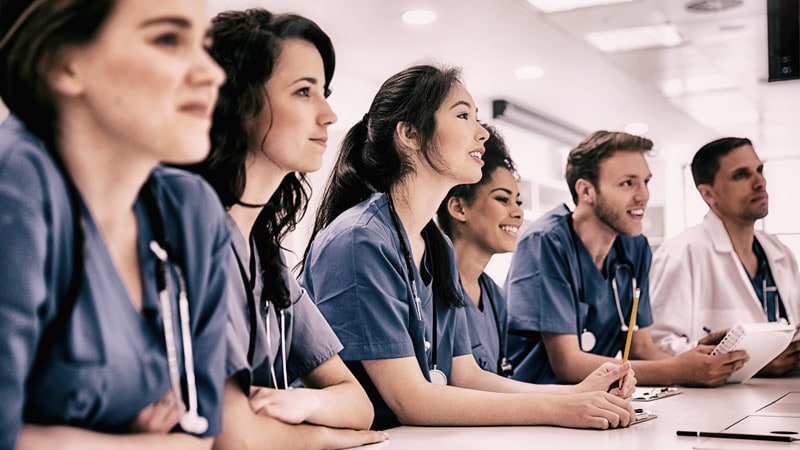 Nurse practitioner (NP), physician assistant (PA), and family medicine training programs across the country are adapting to restrictions now in play after the US Supreme Court overturned Roe v. Wade. The decision is expected to limit abortion training capabilities across the country.

Before the fall semester, some programs are rapidly trying to adjust their training to comply with new laws banning abortions, while programs in haven states are preparing to take on an influx of trainees.

More than half of US states are expected to ban medically unnecessary abortions. Of those states, 13 already have laws in place ― trigger bans ― that are already in effect or will be by the end of the month.

A recent study of ob-gyn residencies by UCSF and the Univeristy of California, Los Angeles, predicted that the overturn of Roe would reduce access to opt-in abortion training from 92% of programs to 56%.

And while ob/gyns are critical to comprehensive healthcare for women, it’s often family doctors and advanced practice clinicians who serve as the primary point of reproductive medicine in many areas, said Rob Stenger, MD, program director of the Family Medicine Residency of Western Montana (FMRWM).

NP and PA programs across the Southeast are now considering how to adapt their training. Vanderbilt University has established a task force to address the effects on training within the university. Because the discussions are still in the works, they are not yet prepared to disclose those details, a university spokesperson said via email.

In North Carolina, the future legality of abortions is uncertain, but some members of Duke University’s faculty told Medscape they are having discussions about what changes may become necessary. Both NP and PA leadership at Duke declined to comment on the specific adjustments they are considering.

In California, advanced practice clinicians were legally able to perform procedural abortions. Now, states such as Connecticut and Maryland are following suit, with new laws that allow midwives, physician assistants and nurse practitioners to do these procedures. In Delaware, midwives and NPs can now prescribe abortion-inducing medication to women in the first 10 weeks of pregnancy.

In states where abortion is limited or is becoming more restricted, there is still a vast opportunity for training in reproductive healthcare. Goodman says that the TEACH curriculum will continue to be very useful even in programs in which procedural training is restricted. “If you do not provide abortion services directly, it is important to know how to refer patients and handle follow-up issues within the context of your practice setting,” she said.

In addition to procedural and medication abortions, the curriculum provides instruction on contraceptives, counseling, referrals, and post-abortion care, all of which are critical to providers in every state, she said.

Despite the overturn of Roe and Montana’s very conservative legislature, Stenger doesn’t expect training within the FMRWM program to change for now. “In Montana, privacy is a protected right in the state constitution. The state Supreme Court recognized abortion as protected under Montana constitution in the 1990s,” he said.

Their training partners ― three clinics in the region ― are expecting a surge of patients from neighboring Wyoming and Idaho. As for the sister training program in Idaho, a trigger ban from 2020 is expected to halt training. Coordinators at the Idaho program did not respond to Medscape’s request for comment.

So, while the administration is actively reviewing the Supreme Court decision to determine whether the ruling will have any implications on training, the Roe reversal will likely have fewer effects on trainees in Kentucky.

A report on Southern hospitals by Columbia University Law School revealed that access to abortions and abortion training across the Southeast was already limited before the Roe reversal. A large number of major hospital systems in this region are affiliated with protestant institutions and so had already limited abortions to medically necessary circumstances. Even public institutions are influenced by the large number of anti-abortion constituents.

A host of haven states are preparing to increase their training capacity. Goodman says that the TEACH program is sponsoring a bill in California that would expand access to abortion care and train the future reproductive healthcare workforce by providing educational scholarships, living wage stipends, and wraparound services to promote success in meeting their professional goals.

Stenger and Goodman agree that simulation and case-based learning may offer some ways for restricted states to adapt their training.

“We [already use] simulation of various types for a lot of our training,” Stenger said. In Montana, simulations of manual vacuum aspiration ― the most common surgical abortion procedure ― are being used. Higher-fidelity, higher-tech simulations are likely available, he said. But “we need some clinical [exposure] even if we ramped up the simulation.”

The newest iteration of the TEACH curriculum, released this month, offers more in-depth guidance on self-managed abortions than any version before it. Medication abortions already make up more than half of abortions nationwide, and researchers expect to see an uptick in self-managed medication abortions with the overturn of Roe. In this event, it will be important for providers to anticipate seeing these patients. Most of these patients will present with cases identical to spontaneous miscarriage, according to a 2020 review article published in The New England Journal of Medicine (NEJM).

While Stenger is confident in physicians’ and advanced care clinicians’ ability to treat spontaneous miscarriages, he’s concerned that the new laws will make doctors wary with respect to treating these patients.

It’s largely safer for the patients and clinicians not to distinguish between spontaneous miscarriage and medicated abortion, according to the NEJM article. However, the same researchers say there will also be a rise in self-managed abortions performed by a nonmedication approach.

Clinicians should prepare to see and offer lifesaving treatment to patients with sepsis, hemorrhage, pelvic-organ injury, or toxic exposures, the authors write.

Goodman said that it’s critical for programs to educate trainees ― and that practitioners take care to educate themselves ― on the laws in their state so that they can safely care for their patients and themselves,