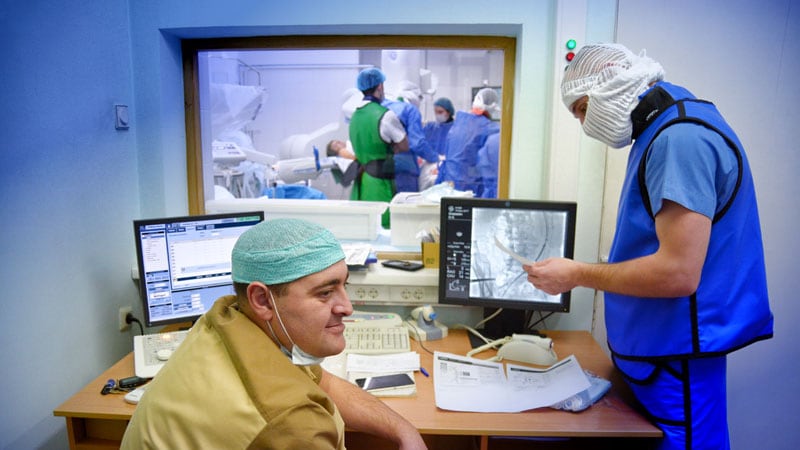 In response to the Russian invasion of Ukraine, international companies and professional associations, including those in the field of medicine, have taken various measures to stop doing business with Russia. Although the intent of these measures may be to pressure the regime of Russian President Vladimir Putin, they also are having significant effects on doctors’ care for their patients.

The current atmosphere is light years away from what it was a month ago, when Russian doctors still took part in international research and clinical trials. They participated in international collaborations and felt themselves to be a normal part of the global medical community.

“It’s very painful to see how professional societies put on hold collaborations with Russian doctors,” said Polina Shilo, MD, medical oncologist at Luch Clinic and program director of the Higher School of Oncology in Saint Petersburg, Russia. “It took us, thoughtful doctors, years and years to build these collaborations. International colleagues learned about us, that we are normal people who speak English, that there is proper medicine and proper medical science in Russia. We felt like we were finally a part of the community, but now it’s over.

“Collaborations are stopped, even those where grants were won and clinical work started, and there’s nothing we can do about it. It’s more difficult for us to publish our work in international peer-reviewed journals. Many of them charge a fee that is very high for us with a new exchange rate, and we still have to figure out how to pay it because our bank cards stopped working. Same thing with foreign sources by subscription.”

“I’m afraid that there will definitely be problems with attending conferences, events, with joint scientific research,” said an anonymous doctor from a private clinic. “International medicine speaks English, and we have only just begun to ‘touch’ this world, to introduce evidence-based medicine. Blocking access to information will only lower the emerging standards of healthcare. Without international credit cards, we cannot pay for international databases such as UpToDate.

“Internships, grants, [and] exchanges may become unavailable to our doctors. And all this will only lead to the ‘old school’ triumph with its expert opinion, which for modern medical science has the lowest level of evidence.”

Modern imaging-based diagnostic methods are the first items at risk, as the machinery and supplies needed for CT, MRI, PET and other sophisticated methods of examination depend on international supplies and are difficult to source, especially quickly.

“To name one example, the x-ray film that we use for mammography is produced only in Belgium,” said an anonymous doctor from a university clinic in a major city. “Now we have just three boxes left in the department. This is enough for 100 women, and we need thousands and thousands. This means no breast cancer screening this year. Our tomograph is of Russian production, but it’s like cars: semi knocked-down assembly with the components from America or Japan. Now the warranty period is over. An x-ray tube cost about 10 million rubles a year ago, which was already an unbearable amount for the hospital. We needed the second CT room for stroke duty, and hoped to do it by the summer. This is not happening.”

He continued, “Russian public healthcare operates through compulsory medical insurance. Its prices were calculated on the basis of certain prices for medicines and other supplies. There used to be favorable and not-very-favorable tariffs. Everyone tried to take patients with ‘beneficial’ diseases. Now there will be no such ones.”

“As for the equipment, I hope it will not disappear completely,” said the head of the radiology department at a large private hospital in Moscow. “We will start to buy something secondhand through third-party countries or use Chinese analogues. Maybe some black market. But another problem is the technical support and service. For now, it looks like the previously signed contracts are not canceled, but sooner or later, this market will collapse too.”

The same concerns apply to virtually all kinds of modern high-tech dentistry and orthodontics. “Right now, we do not feel drastic changes, but they will come at the moment when warehouses run out of medical devices, medicines, and components (and they will run out, despite the decision to ban their export abroad by suppliers who have announced sanctions),” said an anonymous dentist from Moscow.

“Suppliers of high-tech equipment have already raised selling prices for medical devices. As a result, the availability of high-quality, high-tech methods of treatment and diagnostics for our patients will drop sharply. As a result, the country will experience an increase in chronic diseases, advanced stages of cancer, and other issues that could be diagnosed and treated at an early stage. This deterioration in the quality of treatment will result in an increase in the number of complaints and lawsuits against doctors, and an increase in the burden on all the medical workers, which will inevitably make plenty of highly qualified specialists leave their jobs.”

He continued, “Effectively, here is a double blow, so to speak: an increase in the ruble price of drugs, products, and services, plus the gradual decommissioning of tomographs, dental units, etc. Those who are smarter created stocks of consumables (anesthesia, dental implants, filling material, orthopedic elements, etc.). This will be enough for some 6 months or so, and then we will see.”

Foreign suppliers seem quite reluctant even about their pre-war arrangements with Russian clients. “It is not a secret that our industry does not produce what is needed for modern, high-class dentistry,” said an anonymous dentist from Saint Petersburg. “And it’s awful what is happening now. For example, Invisalign informed us post-factum that it is not shipping its products to Russia. They blame their shipper UPS, but it’s their responsibility. Retainers were already ordered, produced, billed, and paid, and now they say that everything that was not yet shipped will remain in their warehouses in Mexico. We are clueless. Patients ask questions, and we do not know what to answer. It harms innocent people’s health, it harms our reputation. It’s all terrible.”

Medicine and medical devices and equipment are considered necessary for humanitarian reasons and are excluded from sanctions. Still, several companies took action without respect to the sanctions.

US drugmaker Eli Lilly and Company said it will send medicines for urgent medical conditions such as cancer and diabetes. It is suspending sales of “nonessential medicines” as well as all investments and promotions. It will also will not start any new clinical trials in Russia.

“International clinical trials in Russia are now on hold,” said Shilo. “This was one of the ways for our patients to get diagnostics and treatment using experimental or best available therapy for free, and for the doctors to gain some additional money to their modest salaries. Most companies now cite issues with logistics and shipment, as delivery services stopped working with Russia, but as a matter of fact, for the time being, no new patients are being admitted. For some patients, being part of a clinical trial is a last resort. For others, it’s a way of seriously lightening the financial burden.”

Among other companies limiting their operations in Russia are Novartis, AbbVie, Johnson & Johnson, Pfizer, and Bayer. Many of them announced that the profit they gain from the Russian market will be dedicated to supporting Ukraine.

“Despite pharmaceutical companies having not yet announced the curtailment of their activities in Russia (although there are calls for this on various levels and platforms, including, unfortunately, Medscape), there are several reasons for the possible, albeit temporary, shortage of certain drugs,” said Alexey Vodovozov, MD, a physician in Moscow and editor in chief of the magazine Russian Pharmacies.

“First, logistical difficulties. All of the main chains have been disrupted, and it will take time to find acceptable work-arounds. Second, fluctuations in the ruble exchange rate lead to problems with mutual settlements, revision of price lists, and price increases. And not necessarily by manufacturers — distributors were the first to act, and then pharmacies were forced to change their price tags.

Third, panic rumors were dispersed on social media networks and the usual reaction of our citizens to any difficulties is to buy up drugs. Right now, it is very difficult to find Nurofen or Norvasc, Depakin or insulin in local pharmacies, although it seems that their supply has not been stopped. Analogues and generics help out, for now. It’s clear that eventually the situation will improve and stabilize at some new level, but both doctors and patients will be thoroughly worried.”

“Right now, imported therapies for oncologic patients are still in stock, purchased at a rate of about 60 rubles per euro,” said Ilya Fomintsev, MD, oncologist and executive director of the Cancer Prevention Foundation in Saint Petersburg. “But they will run out very quickly, in about a month. The following purchases will go at a rate of approximately 160 rubles per euro, which means tripling the cost of an already expensive therapy. This will make therapy completely unavailable to patients except those who pay for it themselves.”

He continued, “Yesterday, I spoke with a pathologist. Reagents and slides for immunohistochemistry have disappeared, so we will probably go back to hematoxylin-eosin. Not all young people know how to do it, and they are right — it’s like using percussion and a stethoscope in the age of CT and MRI.”

“It looks like international companies are going to leave our market,” said Shilo. “It is very sad, though I do not expect a complete collapse of the market of oncological drugs. There are Russian analogues that are not as bad as one might think.”

“I lost the sense of being useful,” said an anonymous Moscow radiologist. “Medicine is not just medicines and instruments. It is a will to do your job properly, to develop, to grow. This will to grow is supported by the understanding that people are in need of what you do. This very feeling has totally disappeared these days. Imagine a chef in a very good restaurant whose business suffers for some reason beyond his control. People tell him, ‘Come on, don’t be sad, people will still want to eat.’ Of course, you can feed people with hot dogs and cure them with oak bark. But this demotivates terribly. In the last year, four employees of mine emigrated. It’s difficult to stand.”

“It is very important for me to convey a simple thought: the pharma business is more pharma than business,” said Shilo. “That if everyone leaves Russia, our patients are really in trouble. We do not have an industry that could cover the needs of, say, oncology. And even if there is something, we will still not be able to produce what we need due to patent restrictions.

“All this in the end multiplies sorrow and suffering, which is completely contrary to humanism.”