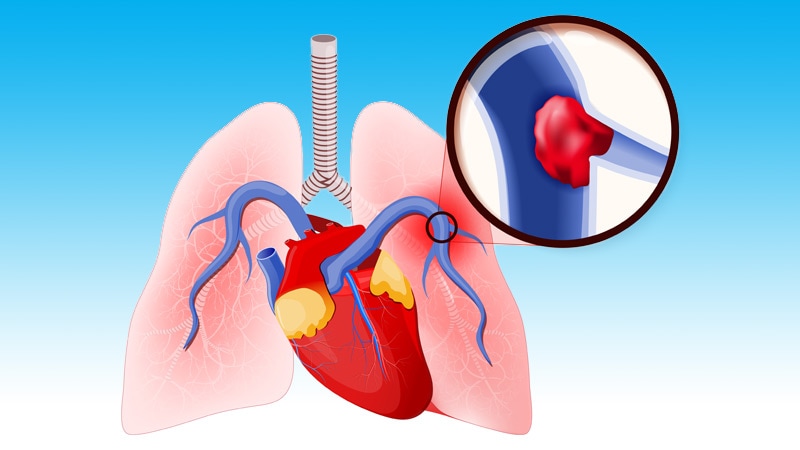 “Female patients hospitalized for PE have been shown to have adverse outcomes when compared to male patients [but] sex-based differences in outcomes for those undergoing advanced interventional therapies such as percutaneous pulmonary artery thrombectomy are currently unknown,” Manyoo Agarwal, MD, David Geffen School of Medicine at the University of California in Los Angeles, and colleagues write.

The study was published online on August 1 in the journal Chest.

Data were extracted using the Nationwide Inpatient Sample database for the retrospective, cross-sectional study. Among the 1,128,904 patients diagnosed with pulmonary embolism between 2016 and 2018, 0.5% of them underwent percutaneous pulmonary artery thrombectomy. “The primary outcome was in-hospital death,” the authors note.

However, as the proportion of patients with PE undergoing catheter-based pulmonary thrombectomy increases, “identifying sex differences in outcomes could potentially help to create sex-specific approaches with respect to patient selection and procedure-related aspects,” the authors suggest. For example, blood transfusion rates might have been higher in women than in men due to lower baseline pre-procedural hemoglobin levels that might lower the threshold for blood transfusion.

“Similarly, sex has been shown to independently predict vascular complications and mortality after vascular access procedures,” the investigators observe. The higher vascular complication rate in women might also be due to their smaller iliofemoral vessels compared with men, which could account for the higher risk of complications. “Further studies are needed to validate our findings and to determine the causes of the increased adverse events and healthcare resource utilization that we observed in our cohort of PE patients undergoing percutaneous thrombectomy,” the authors state.

“Efforts can then be directed toward decreasing these events and optimizing healthcare resource use,” they conclude.