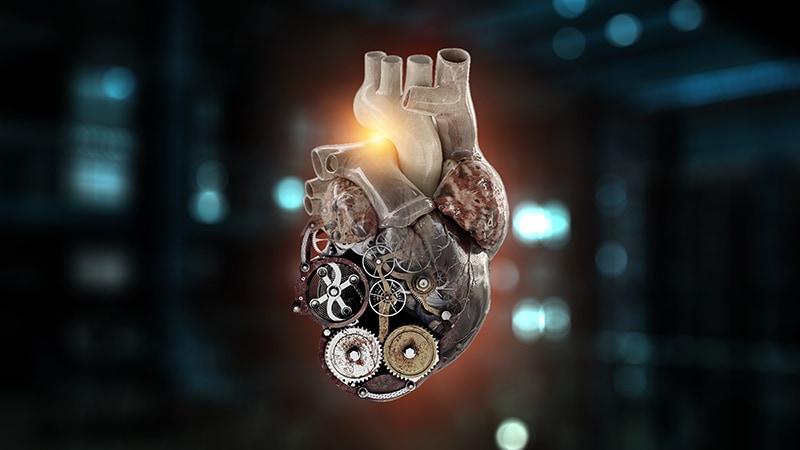 Transcatheter implants designed to alleviate high left atrial (LA) pressures — which, as a possible way to treat heart failure (HF) once seemed like a long shot — are emerging as new stars of heart failure research.

Clinical trial results have been mixed but also seem to have dispelled most doubts about whether interatrial shunt devices may eventually prove an effective treatment for HF. That would be especially welcome in HF with preserved ejection fraction (HFpEF), which has diverse etiologies that seem to converge at elevated LA filling pressures.

A new preliminary analysis suggests the intervention led to improved left- and right-sided ventricular structure and function after 12 months, researchers say, in patients with HF who received a particular shunt device.

They also seemed to benefit in quality of life and symptom status, said Julio Nuñez Villota, MD, PhD, Universitat de València, Spain, who reported the cohort’s 1-year echocardiographic results May 21 at the Heart Failure Association of the European Society of Cardiology (HFA-ESC) 2022 sessions, held virtually and live in Madrid.

The 61 patients with HF and any left ventricular ejection fraction (LVEF) had been implanted with the Ventura (V-Wave) interatrial shunt device on an open-label basis as part of the randomized RELIEVE-HF trial’s roll-in cohort.

The full study aims to assign about 500 such patients to transcatheter implantation of the device or a sham control procedure. Enrollment requires patients to be symptomatic up to ambulatory NYHA class 4 and with pulmonary hypertension and significant right ventricular (RV) dysfunction.

The early experience supports the shunt devices’ intended purpose; positioned in the interatrial septum, they offload blood from the left to the right atrium, decompressing the left atrium and, in theory, improving myocardial structure and HF symptoms.

In the current series, those initially with an LVEF below 40% showed a significant 3.5-point improvement in LVEF at 12 months. The mean gain among those with baseline LVEF less than 50% reached 4.6 points (P = .0078), Nuñez Villota reported. The shunts remained patent throughout the follow-up.

“Obviously, these are preliminary findings that need to be confirmed in a randomized clinical trial,” said Nuñez Villota. But they suggest that use of the Ventura interatrial shunt “improves left ventricular structure and function with favorable effects on the right ventricle,” thereby conferring at least some degree of left-sided and right-sided reverse remodeling.

As promising as the strategy has seemed, enthusiasm for it cooled recently when a large randomized trial failed to show a clinical advantage at 1 year in patients implanted with the IASD System II interatrial shunt (Corvia Medical). Moreover, in the sham-controlled study, REDUCE LAP-HF 2, treated patients appeared to have an excess risk for cardiac events, a component of the prespecified primary safety endpoint.

“In REDUCE LAP-HF 2 we found that the overall population did not benefit,” but subgroups with divergent responses were identified that could help guide future selection of patients for the therapy, trialist Mark C. Petrie, MBChB, told theheart.org | Medscape Cardiology.

In particular, he said, patients with elevated pulmonary vascular resistance at exercise hemodynamic testing or who had right ventricular (RV) pacing leads fared worse with shunt therapy. Such hemodynamic testing had been required for trial entry. Other patients seemed to benefit from the device strategy.

Petrie and his colleagues plan further randomized trials that focus on groups considered most likely to benefit. But for now, he said, the small single-group, observational Ventura shunt experience is not capable of showing “improvements” in cardiac function with the device. “Myocardial recovery is seen in many heart failure cohorts due to time and/or HF medical therapy.”

With REDUCE LAP-HF 2 looming over RELIEVE-HF presentations at the HFA-ESC sessions, the latter trial’s investigators speculated as to why the two trials came out differently; specifically, that they varied in entry criteria and tested distinctly different shunt implants.

“The key concept in interatrial shunting is that the shunt must be small. It must be large enough to result in decompression of the left atrium, but not so large as to produce volume overload on the right side of the heart,” he said. “So, getting this just right is important.”

Beyond that, REDUCE LAP-HF 2 and RELIEVE-HF had “different trial designs, different execution, and different patients,” said Abraham, who holds the position of chief medical officer at V-Wave.

Early computer modeling, Petrie said, suggested that the Corvia device’s 8 mm aperture “would be optimal.” Whether a different aperture diameter may be more effective “can only be determined by randomized controlled trials.” Without such trials, he said, it’s “premature” to claim that either device works better than the other.

The health status of each trials’ patients still might have been a reason, Nuñez Villota said. The rate of cardiovascular death or nonfatal ischemic stroke at 12 months in REDUCE LAP-HF 2 was only 1% regardless of assignment group. And study entry required patients to perform an exercise test for measurement of wedge pressure. Therefore, he proposed, enrolled patients were potentially less sick to begin with, compared with RELIEVE-HF patients, and were therefore less likely to register a treatment effect.

The latter trial’s patients tend to be in NYHA class 3 to 4 with “very high levels” of natriuretic peptides, and in other respects “at very high risk in terms of mortality,” Nuñez Villota said. Of the 97 total roll-in patients, he pointed out, 13 (13.4%) died or were implanted with ventricular assist devices before reaching their 12-month echo assessment.

It’s conceivable the exercise-test requirement in REDUCE LAP-HF 2 “led to inclusion of patients that had an almost nonexistent mortality and low NT-proBNP levels — which is in rather stark contrast to what is seen in the run-in cohort of RELIEVE-HF,” agreed Stefan D. Anker, MD, PhD, German Center for Cardiovascular Research and Charité Universitätsmedizin, Berlin.

And that, he told theheart.org | Medscape Cardiology, could have contributed to the earlier trial’s neutral results. It might be time to reconsider whether “exercise hemodynamics are really needed to select patients for this therapy.”

Anker, a RELIEVE-HF coprincipal investigator, said he’s also a principal investigator for the FROST-HF randomized, sham-controlled trial just getting underway. It’s testing the Atrial Flow Regulator interatrial stent (Occlutech) in an estimated 230 patients with HF and an LVEF greater than 45%.

“I think RELIEVE-HF, with a device that appears to have a somewhat smaller shunt than that of Corvia, and a population rather different from that in REDUCE LAP-HF 2, will tell us in about 1.5 to 2 years what the future of this approach likely is going to be,” Anker said. “FROST-HF will also be most interesting as it will utilize two different shunt sizes.”

Heart Failure Association of the European Society of Cardiology (HFA-ESC) 2022: Improved left and right ventricular structure and function with the V-Wave Ventura Shunt Device in patients with HFrEF and HFpEF, presented May 21, 2022; Inter-atrial shunt for treatment of HFrEF & HFpEF, presented May 22, 2022.