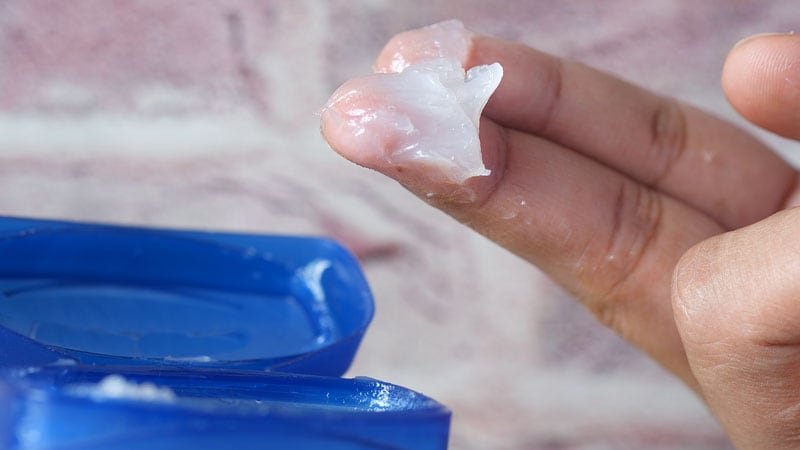 They’ve been around for a while and show no signs of going away: videos on TikTok of people, often teens, slathering their face with petroleum jelly and claiming that it’s transformed their skin, cured their acne, or given them an amazing “glow up.”

TikTok videos mentioning petrolatum increased by 46% and Instagram videos by 93% from 2021 to 2022, reported Gabriel Santos Malave, BA, of the Icahn School of Medicine at Mount Sinai, New York, and William D. James, MD, professor of dermatology, University of Pennsylvania, in a review of petroleum jelly’s uses recently published in Cutis.

The authors said that Vaseline maker Unilever reports that mentions of the product increased by 327% on social media in 2022, primarily because of “slugging,” which involves smearing petroleum jelly on the face after application of a moisturizer.

In a typical demonstration, a dermatologist in the United Kingdom showed how she incorporates slugging into her routine in a TikTok video that’s had more than 1 million views.

Unlike many TikTok trends, slugging may not be entirely bad, say dermatologists.

“I think it’s a great way to keep your skin protected and moisturized, especially in those dry, cold winter months,” said dermatologist Mamina Turegano, MD, in a video posted in February 2022. That TikTok video has had more than 6 million views.

Turegano, who is in private practice in the New Orleans suburb of Metairie, Louisiana, told Medscape that she decided to post about slugging after she’d noticed that the topic was trending. Also, she had tried the technique herself when she was a resident in Washington, DC, more than a decade ago.

At the time, Turegano said that she was aware that “putting petroleum jelly on your face was not a normal thing.” But, given its history of being used in dermatology, she gave it a try and found that it worked well for her dry skin, she said.

Turegano is one among many dermatologists who have joined TikTok to dispel myths, educate, and inform. It’s important for them to be there “to engage and empower the public to become a better consumer of information out there and take ownership of their skin health,” said Jean McGee, MD, PhD, a dermatologist at Beth Israel Deaconess Medical Center, Boston, and assistant professor of dermatology at Harvard Medical School.

McGee and colleagues studied TikTok content on slugging and found that by far, videos that were created by healthcare providers were more educational. Dermatologists who posted were more likely to discuss the risks and benefits, whereas so-called “influencers” rarely posted on the risks, according to the study, published in Clinics in Dermatology.

Slugging is generally safe and effective for those who have a compromised skin barrier or “for those who have sensitive skin and can’t tolerate other products but need some form of moisturization,” said Turegano.

“Its oil-based nature allows it to seal water in the skin by creating a hydrophobic barrier that decreases transepidermal water loss (TEWL),” write Malave and James in Cutis. They note that petrolatum reduces TEWL by 98%, compared with only 20% to 30% for other oil-based moisturizers.

Dermatologists have often recommended a “seal and trap” regimen for dry skin or eczema. It involves a short, lukewarm shower, followed by immediately moisturizing with a petrolatum-based ointment, said McGee.

This could be safe for the face, but “other variables need to be considered,” including use of other topical medications and other skin care practices, she added.

The concept of double-layering a moisturizer and an occlusive agent can be beneficial but more typically for the hands and feet, where the skin can be severely dry and cracked, said Adam Friedman, MD, professor and chair of dermatology, George Washington School of Medicine and Health Sciences, Washington, DC. “I would not recommend that on the face,” Friedman told Medscape.

He and other dermatologists warned about the potential for slugging — given petroleum jelly’s occlusive nature — to enhance the action of any topical steroid, retinol, or exfoliating agent.

Muneeb Shah, MD, who practices in Mooresville, North Carolina, is one of the most popular dermatologists on TikTok, with more than 17 million followers. He also warned in a February 2022 video about potential downsides. “Be careful after using retinol or exfoliating acids because it may actually irritate your skin more,” he says in the video.

“Slugging is awesome for some people but not for others, and not for every night,” said Whitney Bowe, MD, on a TikTok video she posted in July. She recommended it for eczema or really dry skin. Bowe, who practices with Advanced Dermatology in New York City, advised those with acne-prone skin to “skip this trend.”

On a webpage aimed at the general public, the American Academy of Dermatology similarly cautioned, “Avoid putting petroleum jelly on your face if you are acne-prone, as this may cause breakouts in some people.”

And yet, plenty of TikTok users claim that it has improved their acne.

One such user posted a before and after video purporting to show that slugging had almost completely eliminated her acne and prior scarring. Not surprisingly, it has been viewed some 9 million times and got 1.5 million “likes.”

Friedman notes that it’s theoretically possible — but not likely — that acne could improve by slugging, given that acne basically is a disease of barrier disruption. “The idea here is you have disrupted skin barrier throughout the face regardless of whether you have a pimple in that spot or not, so you need to repair it,” he said. “That’s where I think slugging is somewhat on the right track, because by putting an occlusive agent on the skin, you are restoring the barrier element,” he said.

However, applying a thick, greasy ointment on the face could block pores and cause a backup of sebum and dead skin cells, and it oculd trap bacteria, he said. “Skin barrier protection and repair is central to acne management, but you need to do it in a safe way,” he said. He noted that that means applying an oil-free moisturizer to damp skin.

Turegano said she has seen slugging improve acne, but it’s hard to say which people with acne-prone skin would be the best candidates. Those who have used harsh products to treat acne and subsequently experienced worsening acne could potentially benefit, she said.

Even so, she said, “I’d be very cautious in anyone with acne.”

Alicia Ault is a Saint Petersburg, Florida-based freelance journalist whose work has appeared in publications including JAMA and Smithsonian.com. You can find her on Twitter @aliciaault.