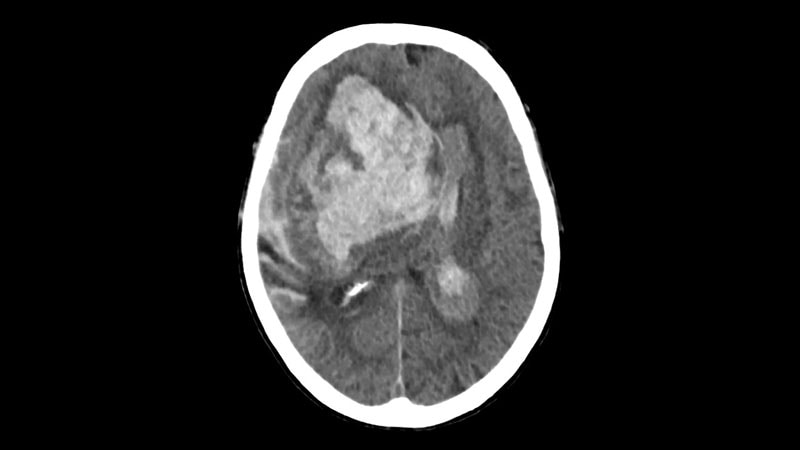 A new study has provided further reassurance on questions about the risk of intracerebral hemorrhage (ICH) with statins.

The Danish case-control study, which compared statin use in 2164 case patients with ICH and in 86,255 matched control persons, found that current statin use was associated with a lower risk of having a first ICH and that the risk was further reduced with longer duration of statin use.

The study also showed that statin use was linked to a lower risk of ICH in the more superficial lobar areas of the brain and in the deeper, nonlobar locations. There was no difference in the magnitude of risk reduction between the two locations.

“Although this study is observational, I feel these data are strong, and the results are reassuring. It certainly does not suggest any increased risk of ICH with statins,” senior author David Gaist, PhD, Odense University Hospital, Denmark, told theheart.org | Medscape Cardiology.

“On the contrary, it indicates a lower risk, which seems to be independent of the location of the bleed.”

The study was published online in Neurology on December 7.

The authors note that statins effectively reduce the occurrence of cardiovascular events and ischemic stroke in high-risk populations, but early randomized trials raised concerns of an increased risk of ICH among statin users who have a history of stroke.

Subsequent observational studies, including four meta-analyses, included patients with and those without prior stroke. The results were inconsistent, although most found no increase in bleeding. More recent studies have found a lower risk of ICH among statin users; the risk was inversely associated with the duration and intensity of statin treatment.

However, the researchers point out that few studies have assessed the association between statin use and the location of ICH. Hemorrhages that occur in the lobar region of the brain and those that occur in the nonlobar areas can have different pathophysiologies. Arteriolosclerosis, which is strongly associated with hypertension, is a common histologic finding in patients with ICH, regardless of hemorrhage location, while cerebral amyloid angiopathy (CAA) is associated with lobar but not nonlobar ICH.

The current study was conducted to look more closely at the relationship between statin use and hematoma location as a reflection of differences in the underlying pathophysiologies of lobar vs nonlobar ICH.

The researchers used Danish registries to identify all first-ever cases of spontaneous ICH that occurred between 2009 and 2018 in persons older than 55 years in the Southern Denmark region. Patients with traumatic ICH or ICH related to vascular malformations and tumors were excluded.

These cases were verified through medical records. ICH diagnoses were classified as having a lobar or nonlobar location, and patients were matched for age, sex, and calendar year to general population control persons. The nationwide prescription registry was also analyzed to ascertain use of statins and other medications.

Results showed that current statin use was associated with a 16% to 17% relative reduction in ICH risk. There was no difference with respect to ICH location.

Longer duration of statin use was associated a greater reduction in risk of ICH; use for more than 5 years was associated with a relative reduction of ICH of 33% to 38%, again with no difference with regard to ICH location.

“We suspected that statins may have more of an effect in reducing nonlobar ICH, as this type is considered to be more associated with arteriosclerosis compared with lobar ICH,” Gaist explained. “But we didn’t find that. We found that taking statins was associated with a similar reduction in risk of both lobar and nonlobar ICH.”

Although amyloid angiopathy can contribute to lobar ICH, arteriosclerosis is still involved in the majority of cases, he noted. He cited a recent population-based UK study that showed that while histologically verified CAA was present in 58% of patients with a lobar ICH, most also had evidence of arteriosclerosis, with only 13% having isolated CAA pathology.

“If statins exert their effect on reducing ICH by reducing arteriosclerosis, which is likely, then this observation of arteriosclerosis pathology being prevalent in both lobar and nonlobar ICH locations would explain our results,” Gaist commented.

“Strengths of our study include the large numbers involved and the fact that the patients are unselected. We tried to find everyone who had had a first ICH in a well-defined region of Denmark, so issues of selection are less of a concern than in some other studies,” he noted.

He also pointed out that all the ICH diagnoses were verified from medical records and that in a substudy, brain scans were evaluated, with investigators masked to clinical data, to evaluate the location and characteristics of the hematoma. In addition, data on statin use were collected prospectively from a nationwide prescription registry.

Other results from the study suggest a possible interaction between statin use and antihypertensive and anticoagulant drugs.

Data showed that the lower ICH risk was restricted to patients who received statins and antihypertensive drugs concurrently. Conversely, only patients who were not concurrently taking anticoagulants had a lower risk of ICH in association with statin use.

Regarding the fact that the reduced risk of ICH with statins was only observed among individuals who were also taking antihypertensive medication, Gaist noted that because hypertension is such an important risk factor for ICH, “it may be that to get the true benefit of statins, patients have to have their hypertension controlled.”

However, an alternative explanation could that the finding is a result of “healthy adherer” bias, in which people who take antihypertensive medication and follow a healthy lifestyle as advised would be more likely to take statins.

“The observational nature of our study does not allow us to determine the extent to which associations are causal,” the authors say.

Gaist also noted that an important caveat in this study is that they focused on individuals who had had a first ICH.

“This data does not inform us about those who have already had an ICH and are taking statins. But we are planning to look at this in our next study,” he said.

The study was funded by the Novo Nordisk Foundation. Gaist has received speaker honorarium from Bristol-Myers Squibb and Pfizer unrelated to this work.