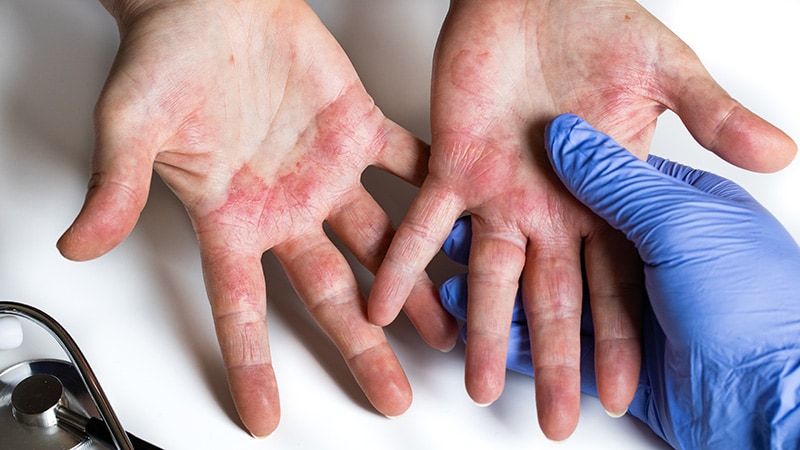 MONTREAL — Systemic treatment of atopic dermatitis (AD) boosts mood in addition to relieving skin symptoms, according to a prospective, real-world, clinical cohort study presented at the annual meeting of the International Society of Atopic Dermatitis.

“Randomized, controlled, phase 3 studies have shown that systemic treatment of AD reduces depressive symptoms, but whether this holds true in real-world cohorts remains to be shown,” said study investigator Lina Ivert, MD, PhD, of the dermatology and venereology unit, in the department of medicine at the Karolinska Institutet, Stockholm.

The analysis also found a strong correlation between the MADRS-S score and all of the secondary outcomes (P < .001 for all). All these improvements remained significant among the 36 patients with 12-month follow-up data.

“The median MADRS-S reduction also remained when we excluded eight patients who were on antidepressants during the study period, so these results cannot be explained by psychiatric medication,” noted Ivert, adding that three patients with severe suicide ideation at baseline improved their MADRS-S suicide item to less than 2 points. “So, this study taught us to look at the suicide item score and not only the total MADRS-S score,” she commented.

Asked to comment on the findings, moderator Marissa Joseph, MD, a pediatric dermatologist at the University of Toronto, Ontario, Canada, said that “the mental health effects of inflammatory skin conditions like atopic dermatitis are well known, but whether or not they are well explored in the patient-physician interaction is a whole other scenario.” There are time constraints, she said, adding, “it sometimes takes some deep-diving…but exploring those types of symptoms is something we need to do more of, and the severity of the disease and reasons for treatment are not just what you can see.”

Joseph pointed out that taking the deep dive also involves being prepared for what comes up. “Once you’ve established there’s a mental health issue, what do you do then?” she said. “If you are a dermatologist, is that in your wheelhouse to address? There’s the education and connection piece for the physician, creating networks where — if you identify a patient who has an issue — who is a person I can send them to? We have these types of connections with infectious disease or with ophthalmologists if there are ocular symptoms, but mental health is one area where there may not be as much support for dermatologists.”

She noted that though all doctors learn how to screen for depression, “there’s the formulaic, yes/no answers, and then there’s the nuanced history-taking, creating a safe space, where the patient is going to answer you fulsomely…and feel heard. Many of us know how to do that. The question is time.”