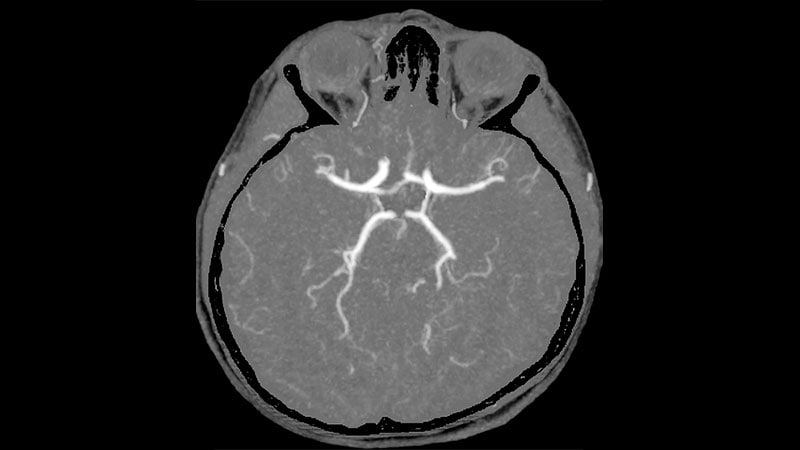 Results of the two Chinese trials — the first to show success of endovascular therapy in basilar artery stroke — were first presented earlier this year at the European Stroke Organisation Conference.

The ATTENTION and BAOCHE trials are now published in the Oct. 13 issue of The New England Journal of Medicine.

In an accompanying editorial, Wouter J. Schonewille, MD, St. Antonius Hospital, Nieuwegein, the Netherlands, points out some differences between these two trials and two previous trials that failed to show clear benefits of thrombectomy in basilar artery stroke, BEST and BASICS.

“Endovascular therapy appears to be effective in patients with basilar-artery occlusion who have moderate to severe neurologic deficits and have limited early ischemic changes up to 24 hours after stroke onset,” he notes.

“Evidence of efficacy from these trials appears to be most robust for a population with a high prevalence of intracranial large-artery atherosclerosis and a low rate of use of intravenous thrombolysis,” Schonewille adds.

The two new trials involved patients with basilar artery occlusion and a moderate to severe deficit, defined as a National Institutes of Health Stroke Scale (NIHSS) score ≥ 10 — although the BAOCHE enrollment criteria were expanded to allow patients with NIHSS ≥ 6 — who received either endovascular therapy plus best medical care or best medical care alone.

In the ATTENTION trial, 340 patients were enrolled up to 12 hours after the estimated time of basilar artery occlusion, with 226 assigned to the thrombectomy group and 114 to the control group. Intravenous thrombolysis was used in around one third of patients.  Good functional status, defined as a modified Rankin scale (mRS) score of 0 to 3 at 90 days, occurred in 46% in the thrombectomy group and in 23% of the control group (adjusted rate ratio, 2.06; P < .001).

Procedural complications occurred in 14% of the patients in the thrombectomy group, including one death due to arterial perforation.

The BAOCHE trial randomized patients with basilar artery stroke who presented between 6 and 24 hours after symptom onset to receive either medical therapy plus thrombectomy or medical therapy only. The trial was halted early at a prespecified interim analysis after 217 patients had been enrolled because of the superiority of thrombectomy.

Thrombolysis was used in 14% of the patients in the thrombectomy group and in 21% of those in the control group.

The original primary outcome, an mRS score of 0 to 4 (with 4 representing moderately severe disability) at 90 days was changed to a good functional status (mRS 0 to 3) during the trial on the basis of data from other studies that were unavailable at the time of the protocol design.

Mortality at 90 days was 31% in the thrombectomy group and 42% in the control group (adjusted risk ratio, 0.75). Procedural complications occurred in 11% of the patients who underwent thrombectomy.

The results for the original primary outcome of an mRS score of 0 to 4 were 55% and 43%, respectively (adjusted rate ratio 1.21), a non-significant difference.

In his editorial, Schonewille points out that the two previous trials, BASICS and BEST, failed to show a benefit of endovascular thrombectomy in basilar artery stroke, but both these trials were hampered by limited equipoise.

The BEST trial was terminated because of a high crossover rate, and a high percentage of eligible patients were not enrolled in BASICS. In addition, a post hoc analysis of BASICS suggested a benefit of thrombectomy in patients with more severe strokes (NIHSS ≥ 10).

He further notes that the main difference between the baseline characteristics of the patients in the two new Chinese trials and those of the patients in BASICS was the high percentage of patients with intracranial large-artery atherosclerosis in the Chinese trials. As a result, almost all the patients with intracranial stenosis in the thrombectomy groups of the ATTENTION and BAOCHE trials were treated with angioplasty or stenting of the basilar artery in addition to the planned thrombectomy.

Although intracranial large-artery atherosclerosis did not appear to modify the efficacy of endovascular therapy in the ATTENTION trial, a finding that suggests little additional benefit of treatment of intracranial stenosis after thrombectomy, atherosclerosis may have extended the time window during which thrombectomy could be effective, given that long-standing high-grade basilar artery stenosis enhances collateral blood flow and increases resistance to ischemia, Schonewille suggests.

“It would be worthwhile to establish a registry involving non-Asian populations, who have lower rates of intracranial stenosis, to monitor the outcomes and safety of endovascular therapy in the extended time window of 6 to 24 hours after basilar artery occlusion,” he says.

Schonewille also points out that in the two current Chinese trials, the percentage of patients who received intravenous thrombolysis (32% in ATTENTION and 18% in BAOCHE) was low as compared with BASICS (79%).

Noting that in all the trials of endovascular therapy for basilar artery occlusion, the incidence of symptomatic intracranial hemorrhage in the control group has been remarkably low (≤ 1%), as compared with the incidence in anterior circulation trials (approximately 4%), he suggests that this might support the more liberal use of intravenous thrombolysis in patients with basilar artery occlusion during the extended time window, a strategy that is being studied in the POST-ETERNAL trial.

The ATTENTION trial was supported by the Program for Innovative Research Team of the First Affiliated Hospital of the University of Science and Technology of China, the Beijing Dingyi Foundation (China Special Fund for Stroke Prevention and Treatment), and the Beijing Healthunion Cardio-Cerebrovascular Disease Prevention and Treatment Foundation. The BAOCHE trial was supported by a grant from the Chinese National Ministry of Science and Technology.