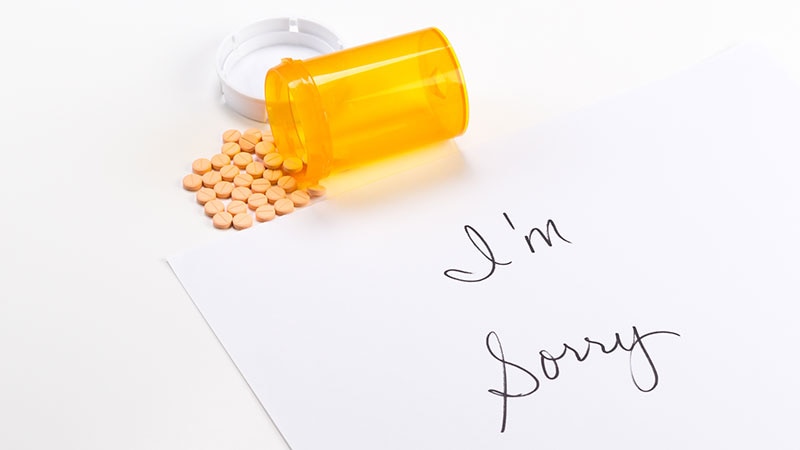 A new analysis of notes penned by seniors who died by suicide reveals several common themes. These include feeling as if they were a burden, feelings of guilt, experiencing mental illness, loneliness, or isolation, as well as poor health and/or disability.

“The most important message [in our findings] is that there is hope,” study investigator Ari Cuperfain, MD, Temerty Faculty of Medicine, University of Toronto, Ontario, Canada, told Medscape Medical News.

“Suicide risk is modifiable, and we encourage that care providers sensitively explore thoughts of suicide in patients expressing depressive thoughts or difficulty coping with other life stressors,” he said.

The study was published online September 1 in The American Journal of Geriatric Psychiatry.

Most previous studies of late-life suicide have focused on risk factors rather than the themes and meaning underlying individuals’ distress.

Cuperfain’s group had previously analyzed suicide notes to “explore the relationship between suicide and an individual’s experience with mental healthcare in all age groups,” Cuperfain said. For the current study, investigators analyzed the subset of notes written exclusively by older adults.

The researchers “hypothesized that suicide notes could provide a unique window into the thought processes of older adults during a critical window for mental health intervention,” he added.

Although effective screening for suicidality in older adults can mitigate suicide risk, the frequency of suicide screening decreases with increasing age, the authors note.

In addition, suicide attempts are typically more often fatal in older adults than in the general population. Understanding the motivations for suicide in this vulnerable population can inform potential interventions.

The researchers used a constructivist grounded theory framework to analyze suicide notes available from their previous study and notes obtained from the Office of the Coroner in Toronto from adults aged ≥65 years (n = 29; mean [SD], age 76.2 [8.3] years; 79% men).

The investigators began with open coding of the notes, “specifying a short name to a segment of data that summarizes and accounts for each piece of data.” They then used a series of techniques to identify terms and themes (repeated patterns of ideas reflected in the data).

Once themes had been determined, they identified “pathways between these themes and the final act of suicide.”

Four major themes emerged in the analysis of the suicide notes.

Recurring terms included “pain,” “[poor] sleep,” or “[wakeful] nights,” as well as “sorry” (either about past actions or about the suicide), and “I just can’t” (referring to the inability to carry on).

The suicide notes “provided the older writers’ conceptual schema for suicide, elucidating the cognitive process linking their narratives to the acts of suicide.” Examples included the following:

“Our study enriches the understanding of ‘why’ rather than just ‘which’ older adults die by suicide,” the authors note.

“Care providers can help older adults at risk of suicide through a combination of treatment options. These include physician involvement to manage depression, psychosis or pain, psychotherapy to reframe certain ways of thinking, or social activities to reduce isolation,” Cuperfain said.

“By understanding the experiences of older adults and what is underlying their suicidal thoughts, these interventions can be tailored specifically for the individual experiencing distress,” he added.

Commenting for Medscape Medical News, Yeates Conwell, MD, professor and vice chair, Department of Psychiatry, University of Rochester Medical Center, Rochester, New York, said that “by analyzing the suicide notes of older people who died by suicide, the paper lends a unique perspective to our understanding of why they may have taken their lives.”

Conwell, director of the Geriatric Psychiatry Program and co-director of the Center for the Study and Prevention of Suicide, University of Rochester, and author of an accompanying editorial, said that “by including the decedent’s own voice, the analysis of notes is a useful complement to other approaches used for the study of suicide in this age group.”

However, “like all other approaches, it is subject to potential biases in interpretation. The meaning in the notes must be derived with careful consideration of context, both what is said and what is not said, and the likelihood that both overt and covert messages are contained in and between their lines,” cautioned Conwell.

“Acknowledging the strength and limitations of each approach to the study of suicide death, together they can help untangle its drivers and support the search for effective, acceptable, and scalable prevention interventions. No one approach along, however, will reveal the ’cause’ of suicide,” Conwell writes.

Batya Swift Yasgur MA, LSW, is a freelance writer with a counseling practice in Teaneck, New Jersey. She is a regular contributor to numerous medical publications, including Medscape and WebMD, and is the author of several consumer-oriented health books as well as Behind the Burqa: Our Lives in Afghanistan and How We Escaped to Freedom (the memoir of two brave Afghan sisters who told her their story).