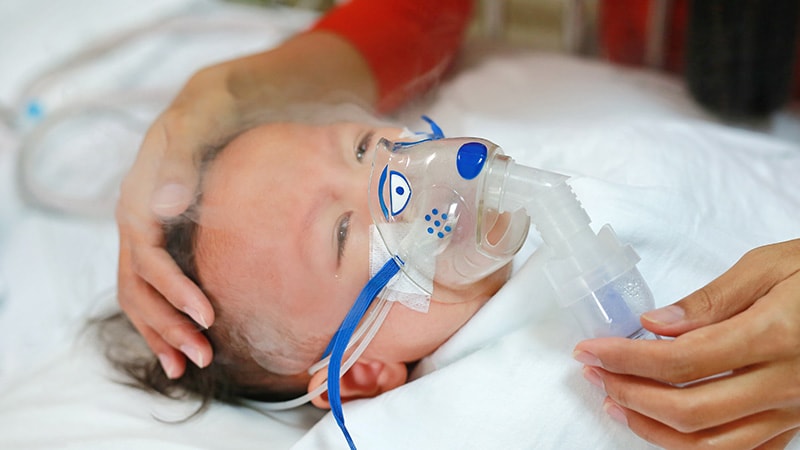 Richard Martinello, MD, a professor of medicine and pediatric infectious diseases at Yale University, doesn’t expect to see a child hospitalized with respiratory syncytial virus (RSV) in the middle of summer. The illness, which can strike infants and older adults especially hard, is known as a “winter virus.”

But not this year. Over the last several weeks, he says, admissions for children with RSV have increased at the Yale New Haven Children’s Hospital. While the numbers aren’t large, they are out of the ordinary, he says, “because usually at this time of year, we see zero. For lack of a better term, it’s weird.”

Likewise, William Schaffner, MD, a professor of infectious diseases at Vanderbilt University School of Medicine in Nashville, says RSV is on the rise there. Tennessee is one of 10 states taking part in a CDC surveillance system that tracks influenza, RSV, and COVID-19.

He says RSV cases had risen by at least a third during the past week, including all age ranges. At this time of year, he says, “We aren’t supposed to have any RSV.”

RSV isn’t the only virus thriving out of season or otherwise acting strangely. Since the pandemic began, flu seasons have been out of whack – sometimes nearly nonexistent, and other times extending well beyond “normal” seasons. Some experts say one influenza “B” strain may now be extinct, while others say it will be back.

Severe colds – what some call “super colds” – also seem to be on the rise in recent warm weather months, although that evidence is mostly based on personal experience, not science.

Trying to explain these out-of-season variations has sparked much discussion among epidemiologists and virologists, Schaffner says, with debates ongoing about whether human behavior and habits or the seasons play a bigger role in the transmission of viral illness.

RSV: Most children contract the virus by age 2, and while it’s generally mild, about 58,000 children under age 5 years are hospitalized each year. During the pandemic, RSV cases decreased from January to April 2020, the CDC reported, and then remained at “historically low levels”: less than 1% positive RSV results a week, for the next year.

But cases began rising in April 2021.

“Last year, we did have an unusual summer,” Schaffner says. After lockdown ended, to everyone’s surprise, RSV infections rose.

That increase triggered a CDC health advisory in June 2021, telling doctors and caregivers about the increase in “interseasonal” RSV cases across parts of the Southern U.S., recommending broader testing for RSV in patients who had a respiratory illness but tested negative for COVID.

Due to the reduced circulation of RSV during the winter of 2020 to 2021, the CDC warned, older infants and toddlers might have a higher risk of RSV since they weren’t exposed to typical levels of RSV for the previous 15 months.

On Twitter, other pediatricians, including those from Maine and Texas, have reported an increase in RSV cases this summer.

Influenza: From October 2020 until May 2021, flu activity was lower than during any previous flu season since at least 1997, according to the CDC.

In late 2021, researchers suggested that one line of influenza known as B/Yamagata may have become extinct.

The 2021-2022 flu season has been mild, the CDC says, but it has come in two waves, with the second wave lingering longer than previous ones. While flu activity is decreasing, last week the CDC said doctors should be alert to flu infections throughout the summer.

Colds: In reports on colds that aren’t based on science, several doctors say they are seeing more colds than usual in the summer, and they’re more severe than usual.

According to the CDC, common coronavirus and respiratory adenoviruses have been increasing since early 2021, and rhinoviruses since June 2020.

“One is that temperature and humidity in the winter favors longer survival of some viruses, leading to longer periods of possible transmission,” says Dean Blumberg, MD, a professor of pediatrics and chief of pediatric infectious disease at University of California Davis Health.

“The other is differences in human behavior, with people spending more time outside in the summer, which results in more distancing and [less] virus concentration due to very large air volume,” he says, and vice versa in winter.

What about the “super colds?” COVID-19 lockdowns and social distancing greatly reduced people’s exposure to common viruses like those that cause colds, says Neil A. Mabbott, PhD, a professor of immunopathology at the University of Edinburgh in the U.K.

“Immunity to these common cold viruses gained through natural infection is considered to last around 8 or 9 months or so,” he says. “Each winter, when we are exposed to the new circulating variants of these viruses, our immunity receives a natural boost.”

That explains why most people get a cold that’s relatively mild. But with all the pandemic lockdowns and the use of hand sanitizers, most people had limited exposure to other viruses, including the common cold. When people emerged from lockdown, the common cold viruses were beginning to circulate again.

“Our immune systems were less able to clear the infection than previously,” Mabbott says. “As a consequence, some may have experienced increased symptoms, giving the impression of being infected with a ‘super cold.'”

“The colds themselves are probably not different to those we got pre-pandemic,” says Ian Mackay, PhD, a virologist at The University of Queensland, Brisbane, in Australia. “But there might be more of them. So I doubt they are ‘super colds’ as much as they are ‘super-perfect circumstances.'”

Those super-perfect circumstances, he says, include people gathering after lockdown; a lack of immunity in new babies; viruses that have remained, even if at low levels, but continue to mutate; and our waning immunity to the range of viruses we’d normally encounter.

While lack of exposure may partly explain why some viruses become rampant out of season, it’s likely not the only reason. For example, the reduced circulation of RSV in the population as a whole also may have reduced the transfer of immunity from mothers to infants, some researchers say, making those infants more vulnerable than usual.

Another thing that may be driving the different behavior of viruses is that the SARS-CoV-2 virus could somehow be interacting with other respiratory viruses, Schaffner says. “And if so, what sort of interactions?”

Many researchers are looking into that, and how co-infections with other respiratory diseases, including the common cold and flu, may affect the course of COVID-19. Some studies have found that the T cells – a source of deeper, cellular immunity in people – generated after a common cold “may also provide cross-protection in some people against COVID-19.”

When researchers in the U.K. studied nearly 7,000 patients infected with COVID-19, including 583 also infected with RSV, flu, or adenoviruses (causing flu-like or cold-like illness), those with flu or adenovirus, compared to the others, were at higher risk of death.

Exactly how COVID-19 will be changing what we know of other viruses is yet to be determined, too.

Even before the pandemic, Martinello says, there were already some shifts in RSV. Florida, for instance, has an RSV season longer than the rest of the country, mimicking the pattern in the tropics.

Will the atypical patterns continue? “My guess is that this will settle out,” he says, with some sort of pattern developing. At this point, there are many unknowns. “We still can’t answer whether there will be some seasonality to COVID.”

Nature Reviews Immunology: “Respiratory syncytial virus after the SARS-CoV-2 pandemic – what next?”