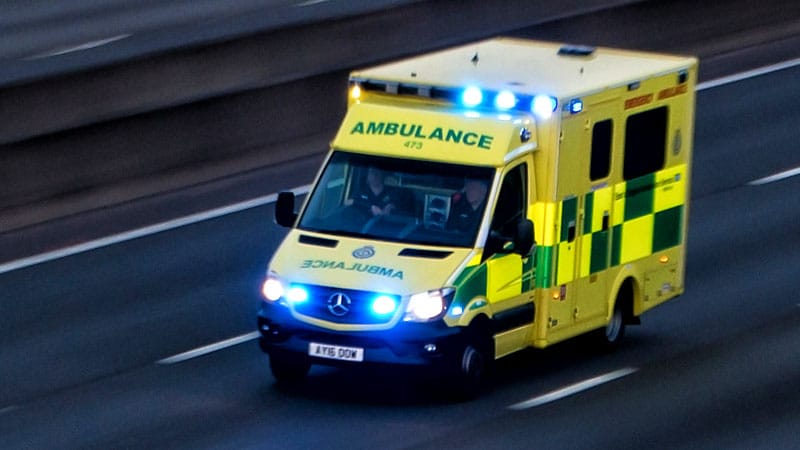 Direct transport of patients with a hemorrhagic stroke to a more distant comprehensive stroke center, rather than taking them to the nearest local primary stroke center, resulted in a strong trend toward a worse outcome and higher mortality, a new analysis of the RACECAT trial shows.

“Factors that could be considered include improvement of prehospital stroke scales, use of biomarkers, and increasing use of mobile stroke units,” she added.

“Drip and Ship” vs “Mothership”

The main results, first reported in 2020 and just recently published in the Journal of the American Medical Association, found no difference in the two protocols in the whole study population.

While there may be benefit in some circumstances for patients with a large vessel occlusion to go straight to the comprehensive center for endovascular thrombectomy, little is known about the effects of prehospital transfer protocols in patients with an intracerebral hemorrhage (ICH).

And as it can be difficult to distinguish a large occlusion ischemic stroke from a hemorrhagic stroke in the prehospital setting, there have been concerns that a policy of transporting patients to a comprehensive center farther away may be detrimental to those who turn out to be having a hemorrhagic stroke and need emergency treatment as soon as possible.

The current analysis of the RACECAT trial focused on outcomes for those patients who were eventually found to be having a hemorrhagic stroke.

Ramos-Pachon explained that ICH represents about 20% of strokes, and has a high rate of mortality, morbidity, and economic impact. In ICH, early neurologic deterioration plays a major role in its devastating course, and early and intensive blood-pressure lowering has proven to be effective in reducing hematoma and edema expansion, she noted. In addition, high variability in glycemia levels, vomiting, infectious complications, and seizures are common issues aggravating ICH prognosis.

“Considering the rapid and devastating course of ICH, prehospital care and transfer protocols may play a major role in functional outcome and mortality,” she said. “However, rapid access to an endovascular-capable centre is now the cornerstone of prehospital stroke management and the RACECAT trial was the first clinical trial randomizing in the field to two different transfer protocols.”

The current report is a prespecified subgroup analysis investigating any difference in the two transfer protocols in patients who were eventually diagnosed as having a hemorrhagic stroke.

The primary outcome was disability evaluated by shift analysis of the modified Rankin Scale (mRS) and safety outcome (90-day mortality).

Of the 1401 patients in the RACECAT trial, 314 were found to have had a hemorrhagic stroke. Of these, 173 patients had been randomly assigned to the “drip-and-ship” protocol and 141 to the “direct to mothership” protocol.

Patients in the two groups had similar baseline characteristics — except that those assigned to the “mothership” protocol arrived at the hospital 40 minutes later than those taken to a local stroke center.

Ramos-Pachon pointed out that these results were from a population of patients with severe stroke symptoms (RACE score of 5 or above) who could be suspected of having a large volume occlusion stroke. The results may also not apply to different geographical areas where transport times are different.

She also noted that paramedics in the ambulances in the Catalonia region are not allowed to give drug treatments during the transfer.

Commenting on the study, Urs Fischer, MD, chairman of the department of neurology at the University Hospital Basel, Switzerland, said this was important information because in some other countries, paramedics are allowed to perform intubation and give IV medications that can help stabilize the patient.

Fischer also agreed that greater use of mobile stroke units may help the situation. “Doing a CT in the ambulance would allow hemorrhagic stroke patients to be referred to the nearest hospital for fast treatment,” he said.

Evidence Against a “Mothership” Approach

Commenting on these findings, Alastair Webb, BM BCh, professor of neurology at the University of Oxford’s Wolfson Centre for Prevention of Stroke and Dementia, United Kingdom, said these latest results from RACECAT provided evidence against introducing a “mothership” approach to all unselected severe stroke patients in the absence of prehospital imaging.

“As a subgroup analysis in a limited population, with an overall null effect in all patients, the evidence is not at all conclusive, but for now the suggestion that the longer transfers could harm some patients makes it hard to justify significant service reorganizations to a ‘mothership’ approach, given any benefits of doing so are unproven,” Webb noted.

“More research is definitely needed,” he added, “which will have to be tailored to each regional stroke service given geographic and healthcare differences.”