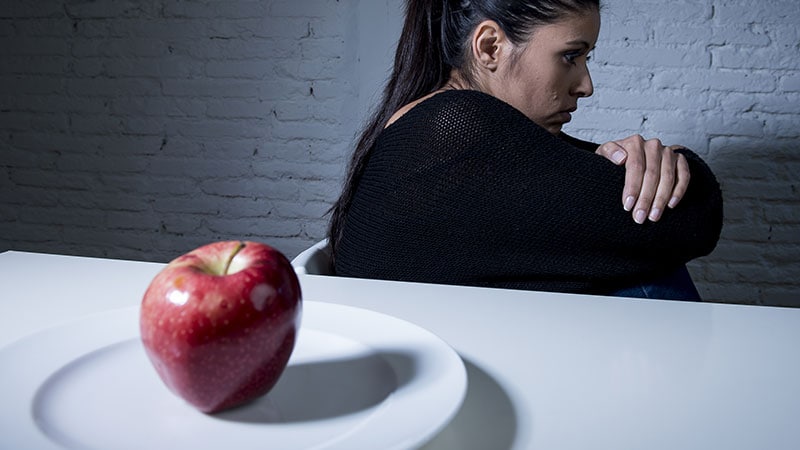 Adolescents later diagnosed with anorexia nervosa (AN) likely embark on the trajectory to AN with undisclosed dieting for weight loss at about age 14, a study of teens and parents found.

In the interview-based study, both adolescents and their parents described a similar prediagnosis sequence of behavioral changes occurring over roughly 1 year to 18 months, but parents lagged some 6 months behind in noticing their children’s disordered eating.

The findings suggest that even teens of normal weight should be asked about their eating habits and monitored more closely for contact with those who endorse these potentially harmful eating behaviors, according to Lisa M. Ranzenhofer, PhD, assistant professor of clinical psychology in psychiatry at Columbia University Medical Center in New York, and colleagues. Their report is in the Journal of Adolescent Health.

“We know that adolescents often have eating disorder behaviors long before they’re diagnosed, so we developed this interview as a tool to figure out how long a maladaptive behavior has been present,” Ranzenhofer said in an interview. “Most studies that report illness duration do so based on diagnosis, so this interview provides a more fine-grained assessment of the duration of problematic behavior, which may help improve understanding of the impact of duration on outcome, and hopefully facilitate better methods for early detection.” Since healthy adolescents are often seen once per year at an annual pediatrician visit, she added, teens engaging in significant dieting might benefit from more frequent monitoring since this behavior can evolve into an eating disorder over a relatively short time frame.

AN is associated with significant medical and psychiatric comorbidity and has a mortality rate among the highest of any psychiatric illness, the authors noted.

The study cohort consisted of 71 girls ages 12-18 years participating in research from 2017 to 2021 at the Eating Disorders Research Unit of New York (N.Y.) State Psychiatric Institute. Patients had either the restricting or binge-eating/purging subtype of AN as diagnosed by the Eating Disorder Assessment–5 questionnaire. A semistructured 15-minute interview with the girls and their parents explored food restriction, dieting, loss of control/binge eating, purging, excessive/compulsive exercise, weight history, and amenorrhea.

Both parents and children were asked whether and when the children had been underweight or overweight, and whether and when primary amenorrhea (no menarche) or secondary amenorrhea (periods missed for 3 months) became evident. Dieting was defined as “deliberately changing eating patterns in any way to influence your shape or weight,” and restriction as “deliberately cutting down on the amount of food that you are eating, in order to change your shape or weight.” Loss-of-control eating was defined as “feeling unable to stop eating or control what or how much you are eating.”

In other characterizations, purging was defined as making yourself vomit on purpose, taking diuretics, or feeling driven to engage in these behaviors. Questions on exercise explored whether children might feel anxious when they do not exercise or inclined to exercise even if sick or injured, with excessive exercise defined as “Feeling like you must exercise, might continue exercising, sometimes in secret, if parents or doctors have told you to stop.”

Other questions focused on use of diuretics or laxatives and other strategies to compensate for calories consumed.

Responses revealed that restriction, underweight, dieting, and excessive exercise were present in most of the sample, while purging, loss-of-control eating, and overweight were reported by fewer than a third. With dieting typically emerging first around age 14, the other behaviors tended to manifest from age 14 to 14 and a half. The average age of formal diagnosis was just over 15 years. Parent-child dyads showed good agreement on the presence and timing of all behaviors except for dieting, for which children reported onset about 6 months earlier or longer duration compared with parents.

Although older age at the time of interview was associated with a lower body mass index percentile and higher eating disorder score, neither age of onset nor duration of disordered eating was associated with severity when researchers controlled for current age.

“For teens starting at a healthy weight, significant and intentional weight loss of more than 5-10 pounds can be a cause for concern,” Ranzenhofer said. Missed periods, refusing meals, skipping meals, fighting or arguing about eating, and withdrawal from normal activities and relationships are other signs of disordered eating. For overweight or obese teens, rapid weight loss and weight loss above and beyond that recommended are also concerning.

As for compulsive exercise, she said, “Altered exercise behavior might look like exercise that interferes with other activities, for example, being late to school or not doing homework in order to exercise.” Other red flags would be physical activity that varies considerably from that of peers, for instance, going running after a 2-hour sports practice and an inflexible routine that precludes being able to skip a day.

“All adolescents, male and female, should be screened regardless of weight trends – underweight, overweight, obese, or normal weight – regarding their body image and thoughts of dieting,” said Margaret E. Thew, DNP, FNP-BC, of the Medical College of Wisconsin, and medical director of the department of adolescent medicine at Children’s Wisconsin in Milwaukee, commenting on the study but not involved in it. “Most adolescents make decisions to lose weight after trying to ‘eat healthy’ but may take an aggressive approach when they don’t see the weight loss they hope to see.”

According to Thew, the study findings support the benefit of giving medical caregivers and parents training on the red flags regarding eating disorders to foster early detection. “These include starting a new fad diet, eliminating foods, ‘healthy eating,’ over-exercising, skipping meals, or no longer eating foods they previously loved.”

She added that times of transition are key junctures to watch: The transition from grade school to middle school, middle to high school, and high school to college. “These tend to provoke eating disorder onset or relapse of eating disorder thoughts and behaviors after diagnosis,” Thew said. “It would benefit the patient to screen for concerns about disordered eating and provide resources, including consultation with a dietitian, as appropriate.”

This study was supported by grants from the National Institute of Mental Health and the Hilda and Preston Davis Foundation. Coauthor Joanna E. Steinglass, MD, disclosed receiving royalties from UpToDate. Thew disclosed no competing interests with regard to her comments.