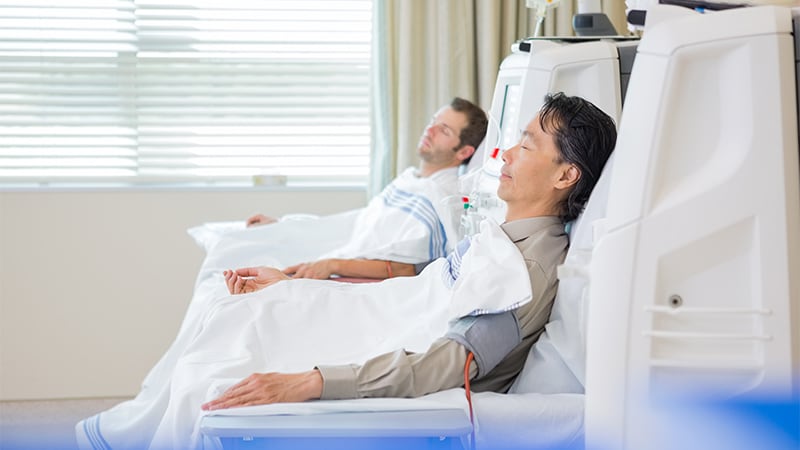 Tenapanor, a novel agent seeking US Food and Drug Administration (FDA) approval for treating hyperphosphatemia in patients on dialysis, received endorsement from an agency advisory committee on November 16, about 15 months after the FDA initially turned down the new drug application because of inadequate evidence of meaningful efficacy.

The advisory panel, whose recommendations are not binding, voted 9-4 in favor of the premise that the benefits of tenapanor for controlling serum phosphorous levels outweighed its risks as monotherapy for adults with chronic kidney disease on dialysis.

The group also supported, by a 10-2 vote with one abstention, the premise that the benefits of tenapanor outweighed the risks for controlling serum phosphorous levels in adults on dialysis when used in combination with phosphate binding agents, the only types of medications with FDA approvals for treating hyperphosphatemia in adults on dialysis.

Most panel members who gave tenapanor a thumbs up focused their decision on efficacy data that showed a modest but nonetheless useful reduction in serum phosphorus levels of roughly 1 mg/dL, about half of what phosphate binders often achieve but with a substantially smaller number of daily pills and a more convenient dosing schedule (a 30 mg pill twice daily).

Tenapanor also seems to work in combination with phosphate binders, and the adverse event profile of tenapanor, which most prominently results in diarrhea, compliments phosphate binders, which often cause constipation. Constipation also often occurs in patients on dialysis regardless of the treatment they receive.

Another Choice for Patients

“Patients will welcome another choice,” said Julia B. Lewis, MD, a nephrologist who chairs the FDA Cardiovascular and Renal Advisory Committee and is a professor at Vanderbilt University Medical Center in Nashville, Tennessee. Lewis voted in favor of tenapanor for both monotherapy and combination therapy. “It has a niche for a subset of patients,” she explained.

Tenapanor “is a safe and worthwhile treatment to individualize treatment” of adults on dialysis, commented Susan R. Mendley, MD, a nephrologist, panel member, and senior scientific analyst with the National Institute of Diabetes and Digestive and Kidney Diseases in Bethesda, Maryland. Mendley, who also gave a thumbs up to the benefit-to-risk ratio of tenapanor for both treatment settings, called the supporting data “sufficient” to allow for safe and informed use. “I trust clinicians to do it right,” she said.

The advisory committee’s assessment of the evidence contrasted with the FDA’s harsher judgment rendered in 2021, which at that time didn’t include an advisory-panel review. Last year, the FDA’s Complete Response Letter to Ardelyx, which markets tenapanor, cited a treatment effect that was “small and of unclear clinical significance.”

The agency asked the company to “conduct an additional adequate and well-controlled trial demonstrating a clinically relevant treatment effect on serum phosphorus or an effect on the clinical outcome thought to be caused by hyperphosphatemia in CKD patients on dialysis.” Ardelyx never ran a new trial of that sort but rather made its case to the advisory committee by reframing and recontextualizing the previously submitted data.

Tenapanor Would Have Two Brand Names

Part of the advisory panel’s comfort with the safety of tenapanor centered on the fact that the FDA had already approved in 2019 a somewhat larger 50-mg twice-daily dose of tenapanor (Ibsrela) for patients with irritable bowel syndrome and constipation. If the agency okays the hyperphosphatemia indication for tenapanor for patients on dialysis, Ardelyx intends to market it under a different name, Xphozah.

Although the trial experience with tenapanor had shown that significant numbers of treated patients on dialysis can develop moderate or severe diarrhea that can significantly compromise normal activity, panel members noted that patients can individually decide for themselves whether the side effect necessitates discontinuing treatment.

Tenapanor “is something that’s needed” for patients with chronic kidney disease who are on dialysis and develop hyperphosphatemia, a very common complication of end-stage kidney disease, because it blunts the body’s ability to excrete excess serum phosphorus (also known as serum phosphate), commented Jay B. Wish, MD, medical director of the out-patient dialysis unit at Indiana University Hospital, Indianapolis, who was not a panel member.

Tenapanor “provides another way for patients to get to the goal level” of serum phosphorus, said Wish in an interview, which ideally is within the normal range of 3.0-4.5 mg/dL, as recommended by the Kidney Disease: Improving Global Outcomes organization. But he also acknowledged that “it’s not for everyone” on dialysis.

Observational evidence indicates that as serum phosphorus levels rise beyond the normal range patients face an increased risk for death as well as multiple other complications. Most patients on dialysis would need treatment with one of the several types of phosphate binders approved for this indication as well as tenapanor to reduce their serum phosphorus to levels that get closer to the normal range, Wish noted.

While phosphate binders work, as their name suggests, by being in a patient’s gut at the same time as ingested food and latching onto phosphate to prevent its absorption, tenapanor works by a different mechanism. It acts locally in the gut to inhibit the sodium–hydrogen exchanger 3, which inhibits phosphate absorption through the paracellular pathway, the primary pathway of phosphate absorption during digestion. Phosphate is a ubiquitous component of food from both animal and plant sources.

Data on tenapanor are from studies funded by Ardelyx, which markets the agent. Lewis, Mendley, and Wish have reported no relevant financial relationships.