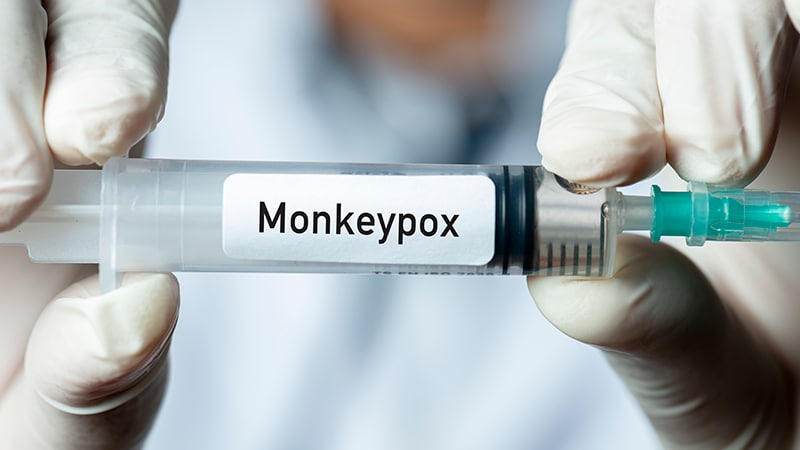 On August 4, US Department of Health and Human Services Secretary Xavier Becerra declared monkeypox a public health emergency. The long-anticipated announcement followed the examples set by the World Health Organization and the states of California, Illinois, and New York.

But that’s apparently not enough to ease access to the US Food and Drug Administration (FDA)–approved antiviral drug tecovirimat (TPOXX), according to Garrett Wilkinson, a government relations and policy offer with the nonprofit Partners in Health, who spoke to Medscape Medical News after attending the briefing.

Tecovirimat was developed and approved to treat smallpox, and the United States holds 1.7 million courses in the Strategic National Stockpile (SNS). It is available free of charge to treat the related virus monkeypox through the Centers for Disease Control and Prevention (CDC), which has stated that tecovirimat may be considered in people who have or are at risk for severe disease.

Despite that, the drug can be hard to access, according to news and social media accounts by patients and advocates. The CDC requires healthcare providers wishing to prescribe the drug to provide extensive paperwork and documentation through an expanded access investigational new drug (EA-IND) protocol.

Though the agency simplified the EA-IND (also called “compassionate use”) protocol in late July, it is still more burdensome for providers than if tecovirimat were available from pharmacies.

The result has caused delays and sometimes even outright lack of availability.

“Physicians are able to prescribe medication off-label. The only reason they’re having to do an investigational drug protocol to access TPOXX is because it’s being held entirely in the Strategic National Stockpile,” said Wilkinson in an interview the day before the briefing.

He is among a number of activists and researchers who have urged the federal government to ease access.

“It’s absurd to make doctors fill out mountains of federal paperwork during a public health crisis to prescribe a drug the FDA has fully approved and deemed safe,” Wilkinson added.

Secretary Becerra can declare that an emergency use authorization (EUA) for the drug is appropriate through section 564 of the Federal Food, Drug, and Cosmetic Act. Having an EUA for tecovirimat would ease the IND-related burden on providers.

But Thursday’s announcement declared a public health emergency, according to the Washington Post and Axios .

That is a different action based on section 319 of the Public Health Service Act and does not entitle the FDA to declare an EUA.

“They didn’t give any indication [during the briefing] that that IND would go away,” Wilkinson told Medscape.

Plenty of Tecovirimat — for the Government

New York City–based SIGA developed tecovirimat after the 9/11 attacks in 2001, according to the company’s chief scientific officer Dennis Hruby, who spoke to Medscape prior to the HHS announcement.

With safety data in hundreds of healthy adults as well as efficacy data for monkeypox in nonhuman primates, the drug earned FDA approval in 2018 for the treatment of smallpox.

The US has stockpiled the drug since 2013, Gomez said, and the company is resupplying the SNS as the oldest batches hit their 7-year expiration date. The company delivered 363,000 courses to the US in 2020-2021, he said, and it can increase that number to more than 500,000 courses a year.

Now, the company is standing up clinical trials and ready to ramp up production as needed, Hruby said.

But despite being FDA-approved and abundant, the drug remains a challenge for providers and patients to access. This isn’t the case in other countries. The drug was licensed in 2022 by the European Medicines Agency to treat monkeypox and is also approved for monkeypox in the United Kingdom.

Hruby said SIGA also supplies Canada and is working to respond to “inquiries from around the globe” for compassionate-use courses of the drug.

The company is well aware of the US bottlenecks.

“I think there’s a lot of frustration in the impacted communities,” Gomez said. “They haven’t been able to access the drug as fast and as speedy as they would have liked.”

TPOXX was always intended to be sold to governments to hold in the event of an outbreak, Gomez said, with a label and manufacturing system tailored to the SNS.

There is precedent for easier access to medications during outbreaks — including those without FDA approval, according to Dr Amesh Adalja, a senior scholar at the Johns Hopkins Center for Health Security at the Bloomberg School of Public Health, who spoke with Medscape before the HHS announcement.

Paxlovid is not FDA-approved, but its EUA allows physicians to prescribe it for COVID-19. During the 2009 H1N1 influenza outbreak, unapproved intravenous (IV) peramivir was made readily available under an EUA. And today, Adalja can order unapproved IV artesunate to treat severe malaria.

“You just call [the CDC] and say, ‘Hey, I’ve got a falciparum malaria case.’ It’s there on the next flight from Atlanta to your hospital,” Adalja said. “With TPOXX, that priority just seems to not be there, because they actually erect barriers…. They’re not logically consistent.”

“The bottleneck is not supply of TPOXX. The bottleneck is the requirements that government has put in place in order to prescribe it,” Adalja added. “What we’ve seen in this monkeypox outbreak is a lot more loyalty to bureaucracy than to actually taking the correct action.”

On July 15, a group of concerned experts sent a letter to HHS, CDC, and FDA. The signers included representatives from the HIV advocacy organization PrEP4ALL, Partners in Health, and researchers and physicians at New York University and Weill Cornell Medicine.

In the letter, the signers asked that CDC rescind its IND requirement to release TPOXX from the national stockpile — or that FDA authorize TPOXX for monkeypox through the EUA process.

Neither appears to have yet occurred.

Safety and Efficacy Data Are Available but Incomplete

Partners in Health recognizes the need to collect human data on the efficacy of TPOXX for monkeypox, Wilkinson said.

“But as we’ve told the White House for weeks,” he said, “this should be done in the context of a formal clinical trial, not an investigational drug protocol that needlessly delays patient access to treatment.”

Two studies of tecovirimat’s efficacy to treat monkeypox are under way, in the Central African Republic and the Democratic Republic of the Congo, according to Gomez. Placebo-controlled trials will begin enrollment in the US, Canada, and Europe within a few weeks, Hruby added, with interim data expected by late fall.

The company is also running a pair of studies funded by the Department of Defense in healthy volunteers, both of which predated the current outbreak. Results may allow SIGA to seek an indication to use the drug for postexposure prophylaxis, Hruby said.

“We’re doing our very best to get this drug we worked so many years [to get] approved in the hands of the people who need it,” he said. “We’ll support any efforts to do that.”

HHS and CDC had not responded to requests for comment by press time.

Jenny Blair, MD, is a journalist, writer, and editor in Vermont.