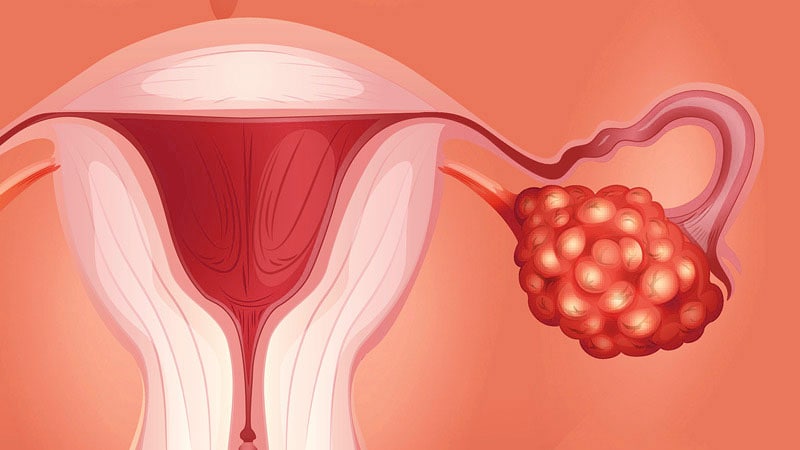 One type of ovarian cancer looks likely to be a new indication for the MEK inhibitor trametinib (Mekinist), which is already approved in the US for use in melanoma, non–small cell lung cancer, and thyroid cancer.

Trametinib significantly outperformed currently used options for recurrent low-grade serous ovarian carcinoma and should be considered a new standard of care, according to investigators reporting phase 2/3 results in The Lancet.

The drug increased progression-free survival (PFS) and objective response rates compared to both chemotherapy and hormone treatment in the trial, which was the first randomized investigation to report positive results in the disease.

“In many institutions, first-line systemic therapy will consist of chemotherapy followed by aromatase inhibitor therapy. In such patients, the results of our study would strongly suggest that trametinib would be the most favorable option at first relapse,” said the team, led by David Gershenson, MD, a gynecologic oncologist at MD Anderson Cancer Center, Houston.

“In patients who have not received a previous aromatase inhibitor, a discussion between the clinician and patient regarding the superior efficacy but less favorable toxicity profile of a MEK inhibitor at first relapse should guide decision-making,” they say.

The benefit from trametinib was seen whether or not the tumor had KRAS, BRAF, or NRAS mutations, so trametinib should be considered “an option for all women with recurrent low-grade serous carcinoma, regardless of mutation status,” the researchers comment.

In an accompanying commentary, Sarah Blagden, MBBS, PhD, an experimental oncology professor at Oxford University, in England, said the findings mean that “a histological diagnosis of relapsed low-grade serous carcinoma is sufficient to initiate trametinib.”

As for the dismal response rate with chemotherapy ― 6% in the trial ― it signals “the end of the road for cytotoxic chemotherapy” for this indication, she said.

Previous Trial With Other MEK Inhibitor

Although recognized as a distinct clinical entity in 2004, low-grade serous carcinoma is currently treated much like high-grade disease, and that’s a problem, the investigators explain.

Low-grade disease is different molecularly and clinically; it’s more resistant to platinum-based chemotherapy and has high recurrence rates. There’s been a push to find better treatments; MEK inhibition seemed promising because of the high prevalence of activating mutations in the MAPK pathway.

However, a 2020 trial with another MEK inhibitor, binimetinib, failed to show a benefit over chemotherapy, as previously reported by Medscape Medical News. Commenting in their paper, Gershenson and colleagues wondered if that trial was negative because those subjects had less advanced disease and had undergone fewer previous treatments than the patients in their own trial with trametinib. They note that in the binimetinib trial, the PFS in the control arm was better than expected, at 10.6 months.

It might also be that trametinib is simply more potent than binimetinib, they add.

The trametinib trial involved 260 women across 84 hospitals in the United States and the United Kingdom who had already undergone surgery. Women in the study were a median of 56.2 years old, and 88% were White patients. Almost half the patients in both arms had undergone three or more prior lines of systemic therapy.

They were randomized 1:1 to receive either trametinib 2 mg once daily or physician choice of treatment (paclitaxel, doxorubicin, topotecan, letrozole, or tamoxifen).

The standard-care group was allowed to cross over to trametinib when they progressed. Median PFS in the crossovers was 10.8 months, and the ORR was 15%.

Crossover required objective evidence of progression according to RECIST imaging criteria. Even so, the investigators said a potential weakness in their study was that physicians might have made the call too early so that their patients could receive trametinib.

It’s possible that MEK inhibition increases ovarian cancer cells’ sensitivity to hormone therapy, so “trials combining trametinib and aromatase inhibitors could be warranted in the future,” the investigators note.

The trametinib arm reported a worse quality of life at 3 months by 3.6 points on an ovarian cancer functional assessment test, but the difference wasn’t considered clinically meaningful.

Still, “patients with poor performance status might not wish to endure the potential toxicity of trametinib in exchange for a 6-month extension to their progression-free life,” Blagden says in her editorial.

The trial was funded in part by Novartis, maker of trametinib. Gershenson reported consulting fees from Genentech and stock or stock options in Johnson & Johnson, Bristol-Myers Squibb, and Biogen. Other investigators had numerous industry ties as well, including one who is an advisor for Novartis. Blagden reported grants from uCana, Sierra Oncology, Redx Pharma, UCB Pharma, Astex Pharma, Tesaro, and BerGenBio.