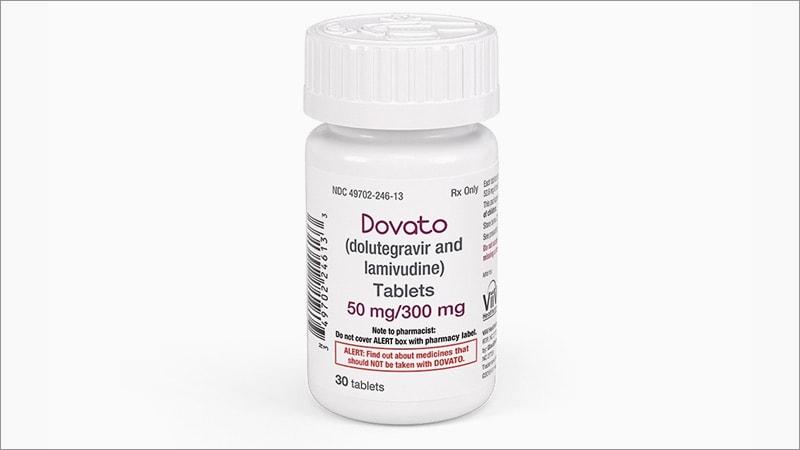 A two-drug fixed-dose tablet therapy of dolutegravir/lamivudine (Dovato, ViiV Healthcare; DTG/3TC) shows noninferiority in viral suppression among people with HIV-1 who switch from any type of three- or four-drug antiretroviral (ART) regimens. But, DTG/3TC also shows feasibility as a first-line regimen in a test-and-treat setting, according to two studies presented at the virtual meeting of the International AIDS Society.

The results on the switch to DTG/3TC are from the phase 3 SALSA trial, which compared patients with HIV-1 who either remained on any current three- or four-drug ART regimen or who switched to the two-drug dolutegravir option.

The two-drug dolutegravir-based regimen had previously been shown in the phase 3 GEMINI-1 and GEMINI-2 trials to have virologic noninferiority and safety compared with three- or four-drug DTG plus tenofovir/emtricitabine (TDF/FTC) ART regimens in treatment-naive individuals, and, in the subsequent TANGO trial, the regimen was also noninferior versus tenofovir alafenamide–based regimens among treatment-experienced patients, at 144 weeks in both studies.

The new SALSA trial, designed to broaden the comparison to treatment with any current three- or four-drug ART regimen, involved 493 patients at 120 study sites in 17 countries.

All patients were initially on a three- or four-drug regimen, with HIV-1 RNA of less than 50 c/mL for more than 6 months, and without prior virologic failure or nucleoside reverse transcriptase inhibitors or dolutegravir resistance-associated mutations.

The participants were randomized 1:1 to remain on their current regimen (n = 247) or to switch to the once-daily, fixed-dose tablet two-drug combination of dolutegravir 50 mg/lamivudine 300 mg (n = 246) for 52 weeks.

In addition to the noninferior virologic outcomes, there were no serious drug-related adverse events, no confirmed virologic withdrawals, and no resistance mutations in either group.

Llibre pointed out that many of the participants who switched were discontinuing regimens such as TDF and efavirenz that are associated with weight loss, “so discontinuation could be more related to weight gain than the introduction of dolutegravir, but this deserves further study,” he noted.

There were no significant differences in changes in eGFR and fasting lipids, or in changes in inflammatory biomarkers between the groups.

Bone and renal biomarkers were more favorable in the dolutegravir two-drug arm, suggesting that bone and renal function was either maintained or even improved with the drug switch, Llibre noted.

Commenting on the research, Alexandra Calmy, PhD, of the HIV/AIDS Unit and LIPO & metabolism group, infectious disease division, Geneva University Hospitals, said that data on quality of life and patient satisfaction measures would be of particular interest.

Calmy coauthored a previous study looking at weight change and pharmacokinetic parameters in patients with HIV who switched to DTG-based regimens, and also found weight changes were increased with the DTG regimens. However, the weight gain was not associated with DTG plasma levels, thus supporting Llibre’s suggestion of possible withdrawal effects from other drugs.

In further findings presented at the meeting on the STAT trial, researchers evaluated the feasibility not of switching to, but of initiating patients on, the two-drug DTG treatment as a first-line therapy, within 14 days of HIV-1 diagnosis.

The “test-and-treat” approach counters common belief that the regimen should be started only after the traditional three-drug regimens, because of the potential of transmitted resistance and baseline hepatitis B virus coinfection.

While two participants had confirmed virologic failure in the study, there were no treatment-emergent resistance-associated mutations, and neither patient discontinued the two-drug DTG treatment. There were low rates of drug-related adverse events (8%) and they were not serious.

“The STAT data is important as it shows us, for the first time, that in patients where potentially very little is known prior to treatment initiation, DTG/3TC can be very effectively used as a first-line regimen in a ‘test-and-treat’ approach without compromising on patient safety,” first author Charlotte-Paige Rolle, MD, director of research operations, Orlando (Fla.) Immunology Center, said in an interview.

Rolle added that “with careful monitoring of test results in the first weeks of therapy, we can appropriately and safely adjust therapy from DTG/3TC to a three-drug regimen if needed for patients that have transmitted drug resistance to DTG or 3TC, or hepatitis B coinfection, with both of these occurring at very low rates regardless.”