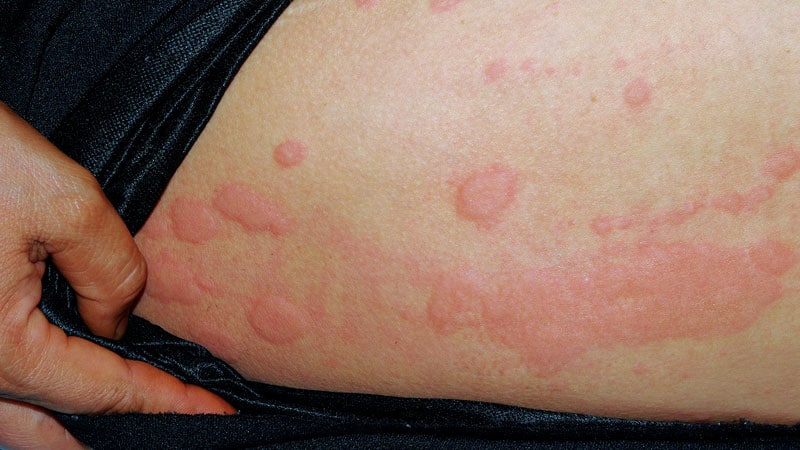 Most patients with chronic urticaria (CU) used treatment during pregnancy, especially with second-generation antihistamines, which appear to be safe regardless of the trimester. In addition, the rates of preterm births and medical problems of newborns in patients with CU are similar to those of the normal population and not linked to treatment used during pregnancy.

Those are the key findings from an analysis of new data from PREG-CU, an international, multicenter study of the Urticaria Centers of Reference and Excellence (UCARE) network. Results from the first PREG-CU analysis published in 2021 found that CU improved in about half of patients with CU during pregnancy. “However, two in five patients reported acute exacerbations of CU especially at the beginning and end of pregnancy,” investigators led by Emek Kocatürk, MD, of the department of dermatology and UCARE at Koç University School of Medicine, Istanbul, wrote in the new study, recently published in the Journal of the European Academy of Dermatology and Venereology.

To optimize treatment of CU during pregnancy and to better understand how treatment affects pregnancy outcomes, the researchers analyzed 288 pregnancies in 288 women with CU from 13 countries and 21 centers worldwide. Their mean age at pregnancy was 32.1 years, and their mean duration of CU was 84.9 months. Prior to pregnancy, 35.7% of patients rated the severity of their CU symptoms as mild, 34.2% rated it as moderate, and 29.7% rated it as severe.

On multivariate logistic regression, two predictors for preterm birth emerged: giving birth to twins (a 13.3-fold increased risk; P = .016) and emergency referrals for CU (a 4.3-fold increased risk; P =.016). The cesarean delivery rate was 51.3%, and more than 90% of newborns were healthy at birth. There was no link between any patient or disease characteristics or treatments and medical problems at birth.

In other findings, 78.8% of women with CU breastfed their babies. Of the 58 patients who did not breastfeed, 20.7% indicated severe urticaria/angioedema and/or taking medications as the main reason for not breastfeeding.

“Most CU patients use treatment during pregnancy and such treatments, especially second generation H1 antihistamines, seem to be safe during pregnancy regardless of the trimester,” the researchers concluded. “Outcomes of pregnancy in patients with CU were similar compared to the general population and not linked to treatment used during pregnancy. Notably, emergency referral for CU was an independent risk factor for preterm birth,” and the high cesarean delivery rate was “probably linked to comorbidities associated with the disease,” they added. “Overall, these findings suggest that patients should continue their treatments using an individualized dose to provide optimal symptom control.”

The authors noted that international guidelines for the management of urticaria published in 2022 suggest that modern second-generation H1-antihistamines should be used for pregnant patients, preferably loratadine with a possible extrapolation to desloratadine, cetirizine, or levocetirizine.

“Similarly, in this population, we found that cetirizine and loratadine were the most commonly used antihistamines, followed by levocetirizine and fexofenadine,” Kocatürk and colleagues wrote.

They acknowledged certain limitations of the analysis, including its retrospective design and the fact that there were no data on low birth weight, small for gestational age, or miscarriage rates. In addition, disease activity or severity during pregnancy and after birth were not monitored.

Asked to comment on these results, Raj Chovatiya, MD, PhD, who directs the center for eczema and itch in the department of dermatology at Northwestern University, Chicago, noted that despite a higher prevalence of CU among females compared with males, very little is known about how the condition is managed during pregnancy. “This retrospective study shows that most patients continue to utilize CU treatment during pregnancy (primarily second-generation antihistamines), with similar birth outcomes as the general population,” he said. “Interestingly, cesarean rates were higher among mothers with CU, and emergency CU referral was a risk factor for preterm birth. While additional prospective studies are needed, these results suggest that CU patients should be carefully managed, particularly during pregnancy, when treatment should be optimized.”

Kocatürk reported having received personal fees from Novartis, Ibrahim Etem-Menarini, and Sanofi, outside the submitted work. Many coauthors reported having numerous financial disclosures. Chovatiya disclosed that he is a consultant to, a speaker for, and/or a member of the advisory board for AbbVie, Arcutis, Arena, Incyte, Pfizer, Regeneron, and Sanofi Genzyme.