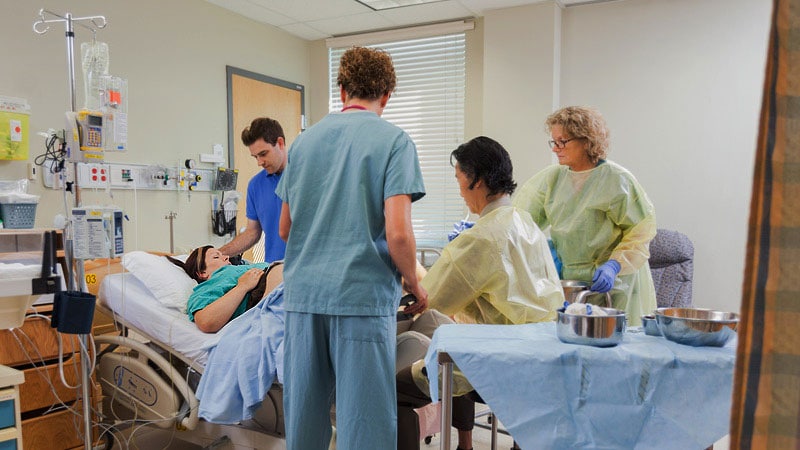 The potential effectiveness of using vaginal progesterone to prevent preterm birth in two different populations was the focus of a pair of studies with mixed results at the annual meeting sponsored by the Society for Maternal-Fetal Medicine on Feb. 3. One study found no benefit from vaginal progesterone in those with first trimester bleeding, while the other, in a head-to-head comparison with 17-alpha-hydroxyprogesterone caproate (17-OHPC), found vaginal progesterone perform similarly to 17-OHPC in singleton pregnancies with a history of preterm birth.

While the first study does not suggest any changes in clinical practice, the second one suggests that vaginal progesterone is an alternative to 17-OHPC, as the American College of Obstetricians and Gynecologists currently recommends. SMFM currently only includes 17-OHPC in its guidelines.

“In otherwise low-risk pregnancies with first trimester bleeding, progesterone should not be prescribed for the prevention of miscarriage or prematurity,” Haim A. Abenhaim, MD, MPH, of the Jewish General Hospital at McGill University, Montreal, told attendees in his presentation.

“Publishing the negative result is so important because this helps the overall body of literature reduce the amount of publication bias that exists in the literature,” Michael Richley, MD, an ob.gyn. and maternal-fetal medicine fellow at the University of California, Los Angeles, said in an interview. Richley was not involved in the research but attended the presentation.

Most preterm birth occurs in pregnancies with no identifiable risk factors, but first-trimester bleeding may indicate subchorionic hemorrhage from placental detachment, which can increase the risk of preterm birth. Other risk factors where progesterone has previously shown effectiveness in reducing preterm birth risk include short cervix and a history of prior preterm birth.

The first study (PREEMPT) was a double-blind, randomized controlled trial conducted at six Canadian hospitals with 533 women. The participants all experienced bleeding within the first 14 weeks of pregnancy and a documented subchorionic hemorrhage. The trial excluded those who already required progesterone, had contraindications to progesterone or had an alternate cause of bleeding.

The intervention group included 264 women randomly assigned to use 200 mg of micronized progesterone administered with a vaginal suppository at bedtime, while the placebo group included 269 women who used a vaginal suppository with no medication, both administered until 34 weeks of pregnancy. The groups were not significantly different in age, race, or former pregnancies, live births, and miscarriages. They were also similar in clinical characteristics of bleeding and subchorionic hemorrhage.

The proportion of term births was similar between the progesterone (74.6%) and placebo (70.6%) groups (P =.3), as was the proportion of preterm births (10.2% progesterone vs. 12.3% placebo, P =.46). There were also no significant differences in the secondary outcomes of cramping, hospital admission, bed rest, or preventive measures, including pessary, cerclage, antibiotics, magnesium, and nifedipine. Newborns across both groups were statistically similar in average birth weight and distribution of birth weights and in incidence of neonatal ICU admission or respiratory distress syndrome. Adverse events were similar across both groups.

“The results are not surprising as several studies in the past have shown similar lack of efficacy,” said. “The pathophysiology of subchorionic hematoma is different from the multifactorial etiologies of spontaneous preterm birth, and given our lack of clear understanding of the actions of progesterone, the lack of efficacy in this subgroup with subchorionic hematoma is not surprising.”

“I don’t believe this will change anything within clinical practice. At this time, progesterone is not used in any form in the setting of first trimester threatened abortion by maternal-fetal medicine specialists,” Richley said. “There may be other subgroups of clinicians who do prescribe progesterone in this setting, and these data should further encourage them to move away from this practice.”

Abenhaim noted a couple unexpected issues that occurred during the course of the study, such as underreporting of subchorionic hemorrhage with radiologic confirmation that resulted in a smaller population and a change in protocol to include patients with no identifiable secondary source of bleeding. The pandemic also halted enrollment, and the investigators halted the trial when recruitment could have continued since interim analysis showed no likely benefit.

Although a 2017 meta-analysis had found vaginal progesterone to be superior to 17-OHPC in preventing preterm birth, few studies were available, and they had wide confidence intervals. This open-label randomized controlled trial took place at five U.S. sites and included participants who had a singleton pregnancy less than 24 weeks along and a history of singleton preterm birth between 16 and 37 weeks. The trials excluded those with placenta previa or accreta, preterm labor, preterm premature rupture of the membranes, clinical chorioamnionitis, or a major fetal anomaly or chromosomal disorder.

Among 205 women initially randomized, 94 in each group completed the trial, either inserting 200 mg of micronized progesterone daily with a vaginal suppository or receiving 250 mg of weekly intramuscular injections of 17-OHPC from 16 to 36 weeks’ gestation. The only significant difference between the groups in demographics or clinical features was that the vaginal progesterone group had a higher proportion of multiple past preterm births (33%) compared with the 17-OHPC group (17%). Cervical length and use of cerclage were also similar between the groups.

Though 30.9% of the vaginal progesterone group delivered preterm before 37 weeks, compared with 38.3% in the 17-OHPC group, the difference was not significant (P =.28). There was a borderline statistical difference between gestational age at delivery: 37.4 weeks in the vaginal progesterone group versus 36.3 weeks in the 17-OHPC group (P =.047). Neonatal outcomes were clinically similar between the two groups. Therapy initiation did slightly differ between the groups, with an average start 1 gestational week earlier in the vaginal progesterone group (16.9 vs. 17.8, P =.001) and a higher proportion of patients in the 17-OHPC group initiating therapy after 20 weeks (16.5% vs. 2.2%, P =.001). Adherence was otherwise similar between the groups, and the groups reported similar rates and types of side effects.

It’s worth noting, however, that the future of 17-OHPC, a synthetic compound, compared with naturally occurring micronized progesterone, continues to be uncertain following a 2020 study that found no evidence of its efficacy, leading the Food and Drug Administration to withdraw its approval for prevention of preterm birth. “These findings are important especially in light of the controversy surrounding 17-OHP,” Jenny Mei, MD, a maternal-fetal medicine fellow at UCLA, said in an interview after attending the presentation. “It is also sometimes difficult for patients to commit to weekly 17-OHPC injections, which requires time and many doctors visits, as compared to vaginal progesterone, which patients can administer at home.” Since this study does not have a placebo group, “it does not address the question of the overall efficacy of either medication compared to a control,” Mei said. “It is also a somewhat small patient population so the results may change with a larger population. The authors conclude it is worth readdressing the use of vaginal progesterone for these patients.”

“One has to remember that the formulation and mechanism of action are very different between 17-OHPC and the vaginal application of micronized progesterone. We do not have enough data to say one is superior versus the other,” said Hedriana, who was not involved in the research. “With 17-OHPC, the mechanism of action appears to be influenced by how the drug is metabolized based on race and ethnicity makeup, and may be influence by epigenetics,” while the mechanism for vaginal progesterone is probably local “given it is applied directly next to the cervix; hence, the results are it is effective in short cervices.” But those differing mechanisms don’t change the clinical significance of the findings. “One can use vaginal progesterone or 17-OHPC based on patient preference and availability,” Hedriana said.

The researchers of both studies reported no personal financial or industry disclosures, though Boelig disclosed that she had taken 17-OHPC and had cerclages during both her pregnancies, which resulted in healthy children today. The PREEMPT trial was funded by the Canadian Institutes of Health Research. The head-to-head trial was funded by the National Institute of Child Health and Development, the March of Dimes, the EW Thrasher Foundation, the PhRMA Foundation, and Covis Pharma, who manufactures the 17-OHPC drug Makena.