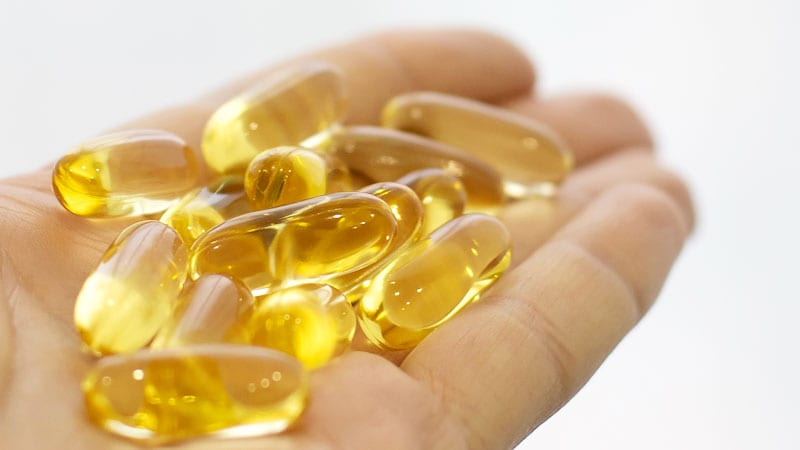 Monthly supplementation with vitamin D3 (cholecalciferol) in older adults without deficiency has no significant benefit in terms of survival outcomes, including mortality linked to cardiovascular disease, new results from a large, placebo-controlled trial show.

“The take-home message is that routine vitamin D supplementation, irrespective of the dosing regimen, is unlikely to be beneficial in a population with a low prevalence of vitamin D deficiency,” first author Rachel E. Neale, PhD, of the Population Health Department, QIMR Berghofer Medical Research Institute, in Brisbane, Australia, told Medscape Medical News.

With more than 20,000 participants, this is the largest intermittent-dosing trial to date, say the authors. The primary outcome was all-cause mortality.

In an accompanying editorial, Inez Schoenmakers, PhD, notes that “the findings [are] highly relevant for population policy, owing to the study’s population-based design, large scale, and long duration.”

This new “research contributes to the concept that improving vitamin D status with supplementation in a mostly vitamin D-replete older population does not influence all-cause mortality,” Schoenmakers, of the Faculty of Medicine and Health Sciences, University of East Anglia, Norwich, UK, told to Medscape Medical News.

“This is not dissimilar to research with many other nutrients showing that increasing intake above the adequate intake has no further health benefits,” she added.

The D-Health Trial involved 21,310 participants in Australia, enrolled between February 2014 and June 2015, who had not been screened for vitamin D deficiency but were largely considered to be vitamin D replete. They were a mean age of 69.3 years and 54% were men.

They were permitted to take up to 2000 IU/day of supplemental vitamin D in addition to the study protocol and had no history of kidney stones, hypercalcemia, hyperparathyroidism, osteomalacia, or sarcoidosis.

Rates of total adverse events between the two groups, including hypercalcemia and kidney stones, were similar.

An exploratory analysis excluding the first 2 years of follow-up in fact showed a numerically higher hazard ratio for cancer mortality in the vitamin D group versus no supplementation (HR, 1.24; P = .05). However, the authors note that the effect was “not apparent when the analysis was restricted to deaths that were coded by the study team and not officially coded.”

Nevertheless, “our findings, from a large study in an unscreened population, give pause to earlier reports that vitamin D supplements might reduce cancer mortality,” they underscore.

Retention and adherence in the study were high, each exceeding 80%. Although blood samples were not collected at baseline, samples from 3943 randomly sampled participants during follow-up showed mean serum 25-hydroxy-vitamin D concentrations of 77 nmol/L in the placebo group and 115 nmol/L in the vitamin D group, both within the normal range of 50-125 nmol/L.

The trial results are consistent with those of prior large studies and meta-analyses of older adults with a low prevalence of vitamin D deficiency showing that vitamin D3 supplementation, regardless of whether taken daily or monthly, is not likely to have an effect on all-cause mortality.

The US VITAL trial, which was published in January 2019 and included 25,871 participants administered 2000 IU/day of vitamin D3 for a median of 5.3 years, showed no reduction in all-cause mortality. The ViDA trial of 5110 older adults in New Zealand, published in December 2019, also showed monthly vitamin D3 supplementation of 100,000 IU for a median of 3.3 years was not associated with a benefit in people who were not deficient.

“In total, the results from the large trials and meta-analyses suggest that routine supplementation of older adults in populations with a low prevalence of vitamin D deficiency is unlikely to reduce the rate of all-cause mortality,” Neale and colleagues conclude.

Caveats include the population was limited to older adults and the study had a relatively short follow-up period, which Neale noted was necessary for pragmatic reasons.

“Our primary outcome was all-cause mortality, so to have sufficient deaths we either needed to study older adults or a much larger sample of younger adults,” she explained.

“However, we felt that [the former]…had biological justification, as there is evidence that vitamin D plays a role later in the course of a number of diseases, with potential impacts on mortality.”

She noted that recent studies evaluating genetically predicted concentrations of serum 25(OH)D have further shown no link between those levels and all-cause mortality, stroke, or coronary heart disease.

“This confirms the statement that vitamin D is unlikely to be beneficial in people who are not vitamin D deficient, irrespective of whether supplementation occurs over the short or longer term,” Neale said.

The source of vitamin D, itself, is another consideration, with ongoing speculation of differences in benefits between dietary or supplementation sources versus sunlight exposure.

“Exposure to ultraviolet radiation, for which serum 25(OH)D concentration is a good marker, might confer benefits not mediated by vitamin D,” Neale and coauthors note.

They add that the results in the older Australian population “cannot be generalized to populations with a higher prevalence of vitamin D deficiency, or with a greater proportion of people not of White ancestry, than the study population.”

Ten-year mortality rates from the D-Health trial are expected to be reported in the future.

Further commenting on the findings, Schoenmakers underscored that “vitamin D deficiency is very common worldwide, [and] more should be done to develop strategies to address the needs of those groups and population that are at risks of the consequences of vitamin D deficiency.”

That said, the D-Health study is important in helping to distinguish when supplementation may — and may not — be of benefit, she noted.

“This and other research in the past 15 yeas have contributed to our understanding [of] what the ranges of vitamin D status are [in which] health consequences may be anticipated.”

The D-Health Trial was funded by the National Health and Medical Research Council. Neale and Schoenmakers have reported no relevant financial relationships.