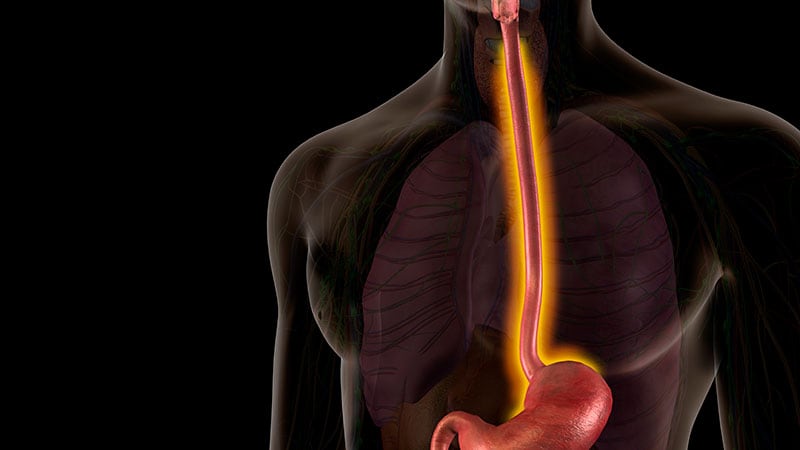 The oral potassium-competitive acid blocker (PCAB) vonoprazan was noninferior and superior to the proton pump inhibitor (PPI) lansoprazole for erosive esophagitis, according to results of the phase 3 PHALCON-EE trial.

Vonoprazan achieved higher rates of healing and maintenance of healing than lansoprazole, with the benefit seen primarily in patients with more severe esophagitis.

The differences in healing rates were evident after 2 weeks of therapy and were maintained throughout the 24-week study, report Loren Laine, MD, Yale University School of Medicine, New Haven, Connecticut, and colleagues.

The study was published online in Gastroenterology.

Gastroesophageal reflux disease is one of the most common disorders of the gastrointestinal tract, and erosive esophagitis is its most common complication.

Although standard PPI therapy is effective for healing erosive esophagitis, some patients do not achieve success with this conventional treatment.

Studies suggest that lack of healing of erosive esophagitis with 8 weeks of PPI therapy can be expected in roughly 5%-20% of patients, with rates up to 30% reported in patients with more severe esophagitis.

The PCAB vonoprazan provides more potent inhibition of gastric acid than PPIs and is seen as a potential alternative. However, data on its efficacy for erosive esophagitis are limited, the authors note.

The PHALCON-EE trial enrolled 1024 adults from the United States and Europe with erosive esophagitis without Helicobacter pylori infection or Barrett esophagus.

Participants were randomized to receive once-daily vonoprazan 20 mg or lansoprazole 30 mg for up to 8 weeks in the healing phase.

The 878 patients with healing were then re-randomized to receive once-daily vonoprazan 10 mg, vonoprazan 20 mg, or lansoprazole 15 mg for 24 weeks in the maintenance phase.

Secondary analyses showed that vonoprazan was noninferior to lansoprazole in mean 24-hour heartburn-free days and superior in healing at week 2 for grade C/D esophagitis (70.2% vs 52.6%; P = .0008).

As expected, serum gastrin increased to a greater extent with vonoprazan than lansoprazole, with levels > 500 pg/mL in 16% of those taking 20 mg at the end of maintenance therapy, the authors report. After stopping vonoprazan, gastrin levels dropped by roughly 60%-65% within 4 weeks.

“PCABs are a promising new option,” Avin Aggarwal, MD, who was not involved in the study, told Medscape Medical News.

They have a “more potent acid inhibitory effect” and have shown “superior healing of erosive esophagitis,” said Aggarwal, a gastroenterologist and medical director of Banner Health’s South Campus endoscopy services and clinical assistant professor at the University of Arizona in Tucson.

The results of the PHALCON-EE trial “validate noninferiority of PCABs compared to standard PPI therapy in the Western population after being proven in multiple Asian studies,” he said.

Aggarwal noted that PCABs work the same way as PPIs, by blocking the proton pumps, but “the longer half-life of PCABs and action on both active and inactive proton channels result in greater acid inhibition.”

Long-term effects of PCAB therapy from stronger acid inhibition and resulting hypergastrinemia still remain to be determined, he said.

Earlier this year, the US Food and Drug Administration (FDA) accepted Phathom Pharmaceuticals’ new drug application for vonoprazan for the treatment of erosive esophagitis.

Last May, the FDA approved two vonoprazan-based therapies for the treatment of H pylori infection, as reported by Medscape Medical News.