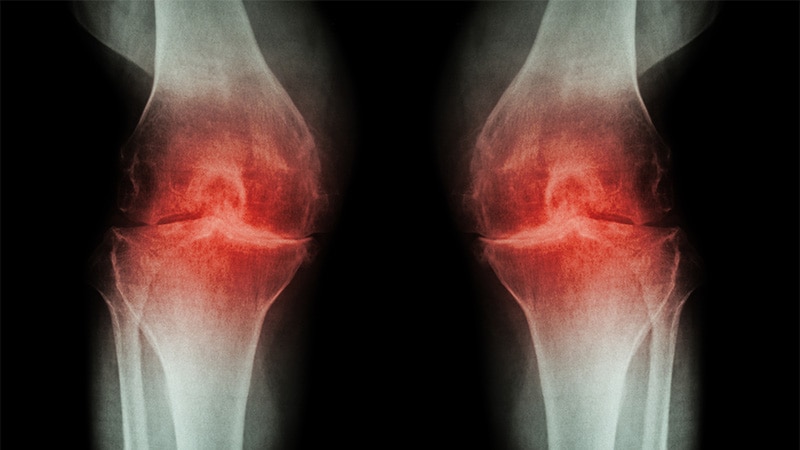 An increase in body weight appears to have a detrimental effect on some radiographic features of knee, but not hip, osteoarthritis, researchers reported at the OARSI 2022 World Congress.

Using data from the Osteoarthritis Initiative (OAI), researchers from the University of California found that a greater than 5% increase in body weight over 4 years was associated with a 29% increased risk for medial joint space narrowing (JSN), compared with controls (P = .038). There was also a 34% increased risk for developing frequent knee pain (P = .009).

Conversely, weight loss appeared to offer some protection from structural damage in knee OA, Gabby B. Joseph, PhD, a specialist in radiology and biomedical imaging, said at the congress, sponsored by the Osteoarthritis Research Society International.

Indeed, individuals who had achieved a weight loss of more than 5% at 4-year follow up were less likely to have a worsened Kellgren and Lawrence (KL) grade than those whose body weight remained the same (odds ratio, 0.69, P = .009).

Weight loss was also associated with a higher change of experiencing resolution in knee pain over 12 months, with an OR of 1.40 (P = .019).

Importance of weight change in OA

“We know that weight loss has beneficial effects on knee OA symptoms, such as pain relief and improvement in physical function,” commented Xingzhong Jin, PhD, an NHMRC Early Career Fellow at the Centre for Big Data Research in Health at the University of New South Wales, Sydney.

“But what is unclear is whether weight loss could slow down structural degradation in the joint in the long run,” he said in an interview. “These findings mean that weight control is clearly very important for knee OA, in terms of improving symptoms as well as preventing structural progression.”

He added: “The evidence on hip OA is less clear. As most of the knowledge in this space was generated from people with knee OA, this work is an important contribution to knowledge around the care of people with hip OA.”

Why look at weight change effects in OA?

“Obesity is a modifiable risk factor for osteoarthritis,” Joseph said at the start of her virtual presentation. Indeed, patients with obesity are more than twice as likely to develop knee OA than their normal weight counterparts.

Although there have been various studies looking at weight loss and weight gain in OA, most have focused on weight loss rather than gain, and OA in the knee rather than the hip, she explained.

The aim of the present study, therefore, was to take a closer look at the possible effect of both weight gain and weight loss in people with hip or knee OA in terms of radiographic outcomes (KL grade change, medial JSN), symptomatic outcomes (knee pain and resolution at 12 months), and the need for joint replacement.

The results, which were published in Arthritis Care & Research, also revealed no differences in the rate of total hip or knee arthroplasties between the groups, and no differences between the weight gain and weight loss groups and controls in term of hip radiographic or symptomatic changes.

“Why are there differing effects of weight change in the knee versus the hip? This could be multifactorial, but there could be a few things going on,” said Joseph. “First, the joint structure is clearly different between the knee and the hip. The knee is a hinge joint. The hip is a ball and socket joint malalignment could affect these in different ways.”

Additionally, “the knee also has thicker cartilage, the hip has thinner cartilage again, and the loading patterns may be different in these joints.”

There were also differences in the rate of progression between the knee and the hip, “this was especially noticeable for the radiographic progression,” Joseph said, with rates being higher in the knee.

Noting that the study is limited by its retrospective design, Joseph concluded: “We don’t know why these people lost or gained weight. So, this would be something that would be more apparent in a prospective study.

“Also, there were no MRI outcomes, as MRI imaging was not available in the hip in the OAI, but clearly morphology T1 and T2 would be useful to assess as outcomes here as well.”

The OAI is a public-private partnership funded by the National Institutes of Health and initial support from Merck, Novartis, GlaxoSmithKline and Pfizer. Joseph and Jin reported having no conflicts of interest to disclose.